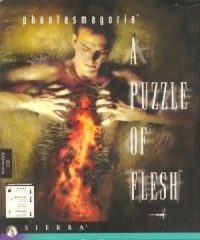 Despite its mixed reviews, Phantasmagoria sold extremely well. Sierra continued its line of FMV adventure games with The Beast Within, the second in their Gabriel Knight series. While it still had some issues, it was a substantially improved product, with better acting, better writing, and some actual puzzle elements. After this, they released their third FMV/adventure title: Phantasmagoria: A Puzzle of Flesh. Despite the name, it has very little to do with its predecessor from a storyline standpoint – it’s a psychological thriller as opposed to a story about a haunted house, and other than one minor reference to Adrienne Delaney, there’s no storyline connection at all. Roberta Williams also stepped aside as the designer, leaving the task to Lorelei Shannon, who previously worked with Williams on King’s Quest VII: The Princeless Bride. 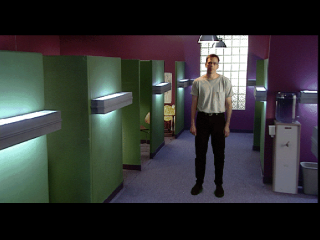 Although only released two years after the first Phantasmagoria, A Puzzle of Flesh is a huge technical improvement. The graphics utilize 16-bit color, and the video compression, though not up to DVD quality, is still substantially better. It also ditches the computer rendered backgrounds (for the most part) and uses real locations. While it does lack the attractively rendered visuals of its predecessor, the visual style is also much more consistent, which makes the whole production look substantially less cheap. The music is remarkably tense, and despite some occasionally cheesy synth instrumentation, is quite excellent. Overall, it’s still not fantastic, but at least it’s been upgraded to the level of a Sci-Fi Channel original movie. 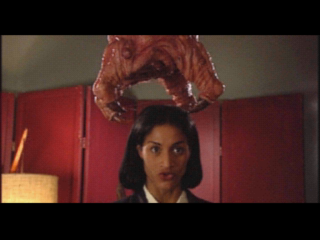 The story focuses on a young man named Curtis Craig, who we are introduced to as a resident of an insane asylum, strapped to a gurney and being treated with electroshock therapy. It jumps forward a bit, and we find Curtis back in the real world, seemingly well-adjusted with a standard office job. But then he starts having numerous eerie visions, which at first creep him out a bit. But then one of his co-workers – a fellow he didn’t particularly care for – is brutally murdered. He begins to doubt his sanity even further, which also attracts the attention of the police. Soon, more of his co-workers end up dead, his visions become crazier, and he begins to dig up all kinds of sordid memories regarding his childhood. All of this, he gathers, is somehow related to the pharmaceutical company he works for, which is seemingly conducting all kinds of nasty experiments. The executives are also presumed to have murdered his father. Furthermore, he’s caught between two women – his adoring sweetheart girlfriend Jocelyn, and the aggressive S&M queen Therese, whom he’s attracted to for reasons he can’t quite understand. 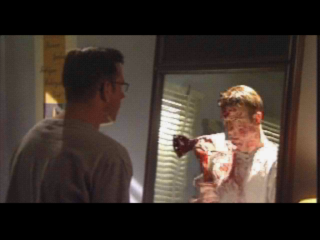 Like its predecessor, A Puzzle of Flesh tries to approach the themes of psychology and sexuality with more maturity than most video games. It does a better job of it, partially because the writing’s better, and partially because the acting isn’t nearly as abysmal. There’s a lot of exploration of Curtis’ childhood, told through counseling sessions with his psychologist, that deal with his attraction to not only sadomasochism, but also to his buddy Trevor. While Trevor has some stereotypically gay mannerisms and acts mostly to lighten the mood, it’s never forced or flamboyant. He’s undoubtedly the most likable character in the whole game, and perfectly fulfills the role of a concerned friend without devolving into a negative caricature. 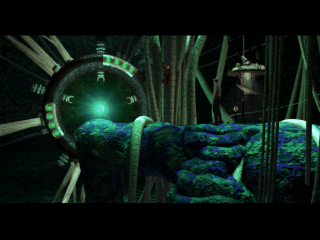 The treatment of all of this is interesting – in 1996, it was rare to have such a prominent gay character (and is still rare today) and Curtis might perhaps be the first bisexual game character ever. For the most part, it’s all handled well, even though some of the S&M scenes provide some unintentional hilarity. (While Curtis is suspended from series of chains, he looks around nervously at the leather-clad Therese and remarks, “I don’t think this is such a good idea.”) But the story doesn’t tie any of these themes together in any meaningful way, as if it’s just trying to be controversial for the sake of it, something which the first Phantasmagoria was also quite guilty of. The packaging proudly wears its RSAC rating (the predecessor to the ESRB), promising “provocative frontal nudity” and “blood and gore”. It’s definitely no worse than an R rated film, but it was enough to get it pulled from certain retail stores and banned in Australia. 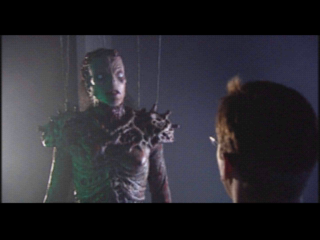 The impact of these adult subjects is also undermined by the final segments, which go completely off the deep end. At this point, the game stops being about Curtis’ inner struggle with his sanity and more about aliens from Dimension X. Wait, what? Yup, it’s a completely jarring transition from psychological horror to science fiction, and while it’s an interesting twist, certainly much more compelling than the story of the first Phantasmagoria, it never feels like it fits. It’s not like it’s played off to be ambiguous either – one could potentially make the claim that this final chapter represents Curtis’ final descent into madness, but there’s nothing that supports this beyond mere conjecture. 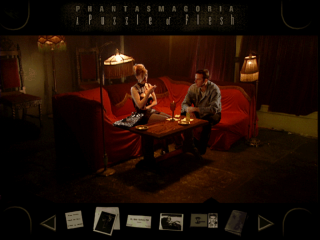 Despite its occasional bouts of lunacy, the movie segments are still an improvement over the first game’s, but A Puzzle of Flesh ultimately commits the same gameplay sins. There’s very little to interact with, and roughly 90% of the game involves clicking on everything possible to find all of the triggers to progress. Wake up, talk to your rat, go to work, talk to your co-workers, talk to your psychologist, go to a restaurant/bar, and then repeat in the next chapter. The puzzles are extraordinarily sparse – most simply involve figuring out passwords, which is never hard to do – and other solutions are lying around scribbled on Post-It notes. 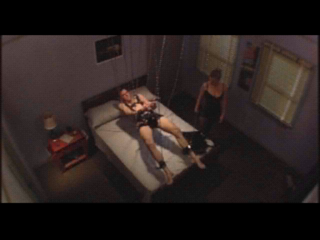 The few other puzzles are terribly integrated. Right at the beginning, Curtis discovers that his wallet is missing, and upon some searching, finds it under the couch. The solution is not to move the couch, but rather, to get your rat, send it to retrieve your wallet, and then lure it out with a granola bar. How absurd. For a standard adventure game, this isn’t that crazy of a puzzle, but when you’ve removed the layer of abstraction that replaces live actors with cartoon characters, you’d expect the puzzles to work in a vaguely rational manner. And then, just like the plot, the whole design veers off course in the final chapter, where you’re expected to solve a puzzle involving an alien circuit board without any instructions whatsoever, as if the developers felt like they needed to make up for the simplicity of the rest of the game. There’s also another series of timed “click the right spot or you die” events, and they’re just as annoying as before, although you still get the nice, gory death scenes when you fail. 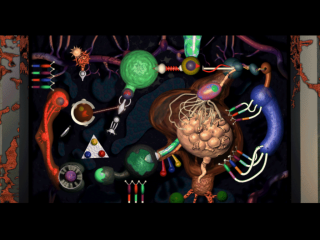 The folks at Sierra were fully cognizant of how barebones their game was, so they added in a secret Easter egg hunt. Hidden stuff is nothing new to adventure games, but there are literally dozens upon dozens to find, along with a scoring system. They’re practically impossible to uncover without using a guide, but they give some incentive to play through the game once you’ve already seen it. Most of them are silly sound effects (including a few from The Simpsons) but there are also a few wacky outtake clips, including one where one of the directors walks into the scene dressed as Batman. 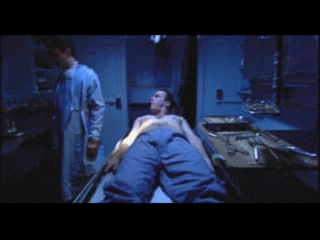 The biggest question, though, is why exactly is A Puzzle of Flesh a computer game and not a movie? Electronic games are a perfectly valid medium for storytelling because it makes the player an active participant rather than a passive observer, potentially allowing for closer emotional resonance. For as insubstantial as Phantasmagoria was, at least there was a sense of isolation and exploration as you made your way through the manor, making it easier to empathize with Adrienne. There’s nothing like that in A Puzzle of Flesh, at all – the game world is too small to get involved with, and it never feels like you’re truly involved in Curtis’ life. At least there are a few nice touches – you can read through your e-mails, and amongst idle banter and corporate memos, you’ll find (imaginary?) e-mails from Curtis to his co-workers outing himself as a lunatic, or job offers straight from Satan himself. 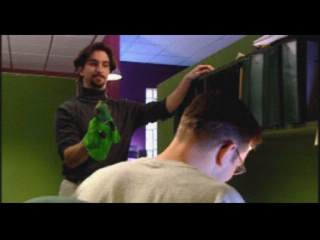 A Puzzle of Flesh is also quite short – there are technically about four hours of video spread over five CDs. That’s okay, though, because while it’s still heavily flawed, its ambitions are a bit more fully realized, and despite the near total lack of interaction, it’s still strangely engrossing.