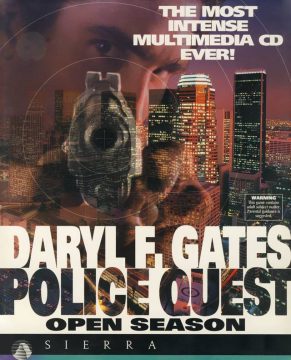 The fourth Police Quest game represents a marked shift in tone from the previous games. By this point, Jim Walls had left the series, and Sierra found former Los Angeles police chief Daryl F. Gates to helm the series. He’s a controversial figure – he once said casual drug use was akin to treason – and it’s questionable exactly how much influence he had on this game, other than putting his name in large letters on the box. Rather, the game actually seems to be designed by Tammy Dargan, who had previously worked on the television show America’s Most Wanted. To provide a greater sense of realism, the location moved from Lytton to real-life Los Angeles, and Sonny Bonds has been replaced by homicide detective John Carey. 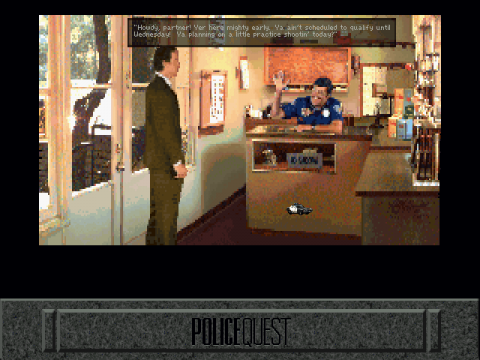 The series had been growing successively darker with each new installment, but this one almost goes overboard, as the game begins at a crime scene where you not only discover a body of a slain police officer, but a murdered 8-year-old boy in the dumpster. There’s a serial killer on the loose, one who seems particularly obsessed with both police officers and the general public. The citizens are naturally horrified and outraged, as it’s apparently “open season” on everyone. Carey’s investigation leads him into a run-in with popular rapper Yo Money, pits him against neo-Nazis, sends him to seedy locations like strip clubs and gets him into gun-fights in crime-ridden South Central Los Angeles. You also spend a lot of time in the morgue, asking questions about the deaths and getting all of the stomach wrenching details. It’s a far stretch from the days of the first game, when you’d just hang out at diners and pick up drunks.

Police Quest: Open Season (often referred to as Police Quest 4 despite the absence of a numeral in the title) is the first Sierra title to use completely digitized graphics. It is not a full motion video title, however, as it still uses static backgrounds and sprites like the previous games. While Sierra had been using rotoscoping in the past, here the entire game consists of scanned photographs and fully animated digitized actors. The result looks absolutely terrible. Although the game runs in SVGA, the resolution of the images is incredibly haphazard, with most locations being horribly pixellated and borderline illegible. At any given time, the screen barely looks like anything more than a mess of pixels. The animation is smooth, but whenever the characters try to act with some semblance of realism, it looks borderline creepy, especially since it’s difficult to make out any type of facial expression. Even though it looks reprehensible, at least it succeeds in illustrating the gritty atmosphere that the game aims for. It’s also the only title in the series to be released on CD with full voice acting. 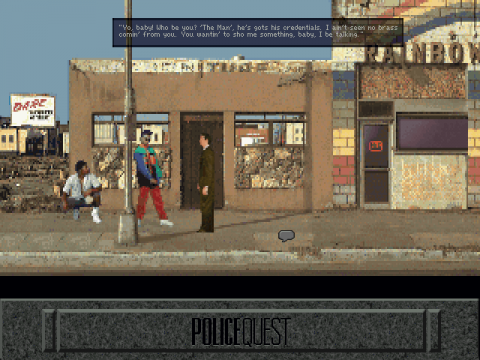 Most of the more tedious elements of the previous Police Quest games are gone – there’s no more driving around or pulling people over, as you simply select locations on a map screen. You still spend a lot of time investigating crime scenes, using the homicide kit to obtain evidence, taking notes and questioning witnesses about the murders. It does get a bit silly that you need to remember to fill out paperwork every time something happens, to show the more realistic side of police work, but at least it only takes a few clicks. More onerous are the mandatory first person shooting gallery segments at the police academy, which need to be done several times throughout the investigation. There’s no real point to them either – at least when they were in Police Quest II, they were to aid in solving a puzzle. There are also some suspicious puzzles, like when you need to distract a dog with some pretzels or take down the final enemy by making a homemade torch out of a spray can and a lighter. These are far from the most illogical puzzles seen in an adventure game, but they feel very out of place for a Police Quest game. The game is also divided into four days, and sometimes it’s hard to find the trigger to continue. It’s especially difficult when you’re supposed to notice that the white blob that appeared on your desk is apparently a very important memo! 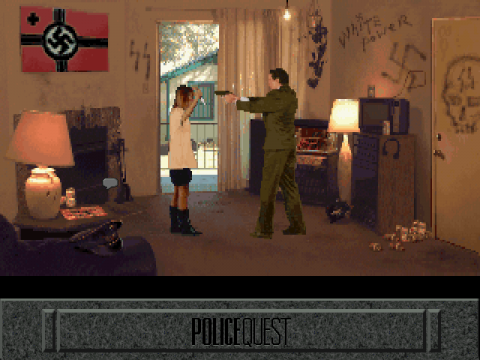 Detective Carey is also a pretty lousy character. Sonny Bonds never had much of a personality, but at least he was vaguely likable. Here, one of the first actions Carey needs to do is push a reporter out of the way instead of responding to her questions. This is the sort of thing that would’ve likely gotten you a “game over” in earlier Police Quest games for not following procedure, but here it’s mandatory. The first police officer killed is apparently one of his best friends, but even when questioning his widow, you never really get that impression. The game’s all shock value, no emotion. It’s technically no worse than the earlier games, but they didn’t have as lofty goals either. The writers tried to give some of the secondary characters some liveliness by giving them quirks – the cowboy-talking guy at the shooting gallery, the hideously flirtatious secretary, the morgue assistant who has a penchant for awful jokes – yet they all just come off as irritating and awkward. The game was also criticized when it came out for its somewhat racist portrayals of minorities, especially the rappers, who all seem to talk in Ebonics, and the Korean convenience store owners. 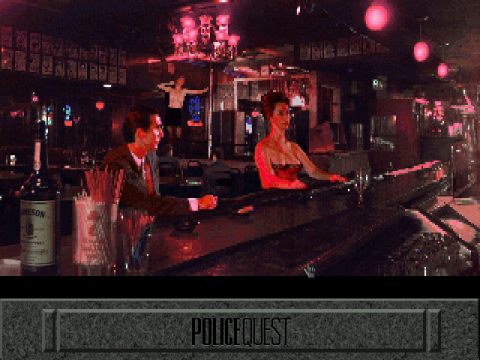 Police Quest: Open Season is regarded as a black sheep amongst the series, just because it’s so drastically different. It’s not always terrible, but the awful visuals, stupid puzzles, and generally subpar writing make it far duller than it wants to be. It’s also the last true Police Quest title, as the series went drastically awry from here on out.