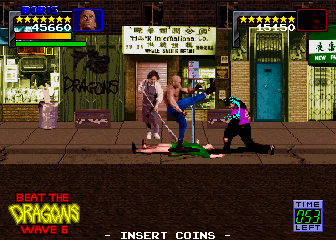 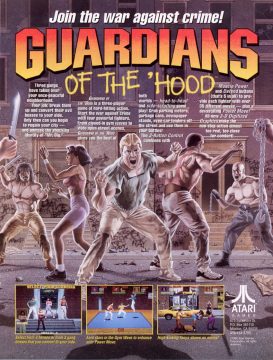 Guardians of the ‘Hood is the spiritual successor to the infamous brawler Pit Fighter. It builds off of its formula and ever-so-slightly improves on it, while still managing to be terrible in almost every way. Like Pit Fighter, it uses actors in terrible looking costumes for sprites. There are one-on-one segments in the gym that play almost exactly like its spiritual predecessor, making the connections even more clear. Guardians of the ‘Hood is a lot less known than Pit Fighterand was never ported anywhere.

The story involves Mr. Big (no relation to similarly named characters from SNK’s Art of Fighting or Midway’s NARC) taking over “this crummy town”. It’s up to four gym rats to take justice into their own hands and stop him. Mr. Big commands three gangs: The Dreads, Shavers, and Dragons. The Dreads are all Jamaican stereotypes with dreadlocks. Their leader is the ridiculously named Jay-Jay, who becomes playable once you beat him. The Shavers are bikers/skinheads that look utterly ridiculous. Their leader is Boris, a disappointingly generic guy who joins once you defeat him. The Dragons are the last gang. They’re Asian stereotypes and, as expected, their gang leader Kwan becomes playable after defeat. After conquering the three gangs it’s off to fight Mr. Big, who recycles previously fought enemies from other stages.

The digitized sprites of the actors is rather grainy. The scaling is pretty good though, as sprites grow and shrink when at appropriate places on the screen. Things get a lot less grainy when characters are in the center row. Every so often you also come across some interactive sight gags that are amusing and may distract you from the awful controls and sound. Some of the more interesting ones are the ability to pick up and throw a homeless man as though he were an inanimate object, punching a granny only to have her punch you back, and a creepy man in a trench coat flashing a subway. 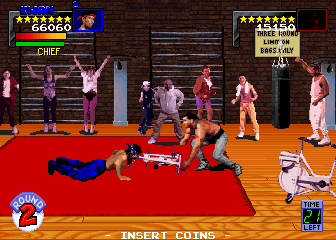 Levels are divided into three parts. The first is a standard belt scrolling segment where you move forward and beat up anything in your way. There are no crowd control moves or combos to speak of, though technically they aren’t needed. The most enemies on screen at a time is usually two. These segments tend to have the most sight gags. The second segment has your character going into a gang’s base of operations, which is usually a seedy building like an adult movie theater or a strip club. This is where you fight and recruit a boss. The third and final segment turns the game into a very basic and very bad fighting game. It takes place in the gym where a playable character (usually Chief, the big guy) challenges you. The AI in this segment is incompetent, being bested by simply spamming kick while dodging the occasional tossed piece of exercise equipment.

Guardians of the ‘Hood is pretty short, beatable in less than half an hour save for the terribly cheap final boss. Just about everything is very poorly implemented and adds to the air of silliness. The characters all look silly, the sound is terrible, the controls are unresponsive, and while it is a step up from Pit Fighter, the old saying about polishing a turd rings true – the best thing that can now be said about it, is the humor. It’s hard to take Guardians of the ‘Hood seriously. It’s sometimes fun, just not in the way that a good game should be.