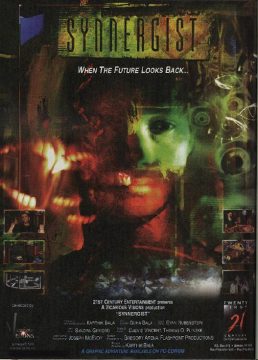 Think back to adolescence, where dreams were bigger and ideas seemed brighter because they neglected their harsh complexities. The ideas were so exciting that you may have shared them with family, friends – heck, anyone willing to listen. You were so wrapped up in them at the time that you didn’t notice talking about what you wanted to do was infinitely more fun than actually doing it – probably because it was easier.

Synnergist (inexplicably spelled with two n’s instead of one) plays like one of these adolescent dream-ideas played-out, only fully-realized. It’s a dedication power-trip, a crash-course in persistence and childlike enthusiasm getting ahead of skill and talent. Conceived by brothers Karthik and Guha Bala (the founding duo behind the mega-developer Vicarious Visions) over a 1991 spring break amidst their high school years, it seemed their vision of an FMV cyberpunk point-and-click adventure game stuck to them like glue, because a whole half a decade later the game was out and published in Europe-only by 21st Century Entertainment. It retains every shred and ounce of their naive energy from their high school years, evident from its juvenile writing to its imagination-fueled set-pieces and backdrops. It’s a fascinating mess of a game that still manages to be compelling, and more often than not its shortcomings work accidentally in its favor. There’s something strangely endearing about the whole experience, and not just from the extensive unintentional humor. 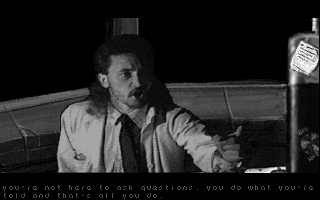 The finger-waving was a necessary touch.

Our story takes place in New Arhus City, a once-prosperous metropolis now rundown by widespread chaos and decay. In an alternate 2010 AD, a young and ambitious journalist named Tim Machin is stuck writing for a real cruddy inner-city tabloid newspaper called the “New Arhus Chronicle”. Machin, dressed in almost uniformly-colored dress-shirt and work pants, laments his job in the opening scene of the game, where he’s viciously berated by his boss, Mr. Hallmaggs: “What am I, flapping my mouth so that I can fly away?” He shouts, and somehow the protagonist, rather than crack a smile, looks disinterested and bored against a painfully obvious greenscreen. This sets the tone for the rest of the game – you’re in for what’s most comparable to a high school theater play. It’s a fitting comparison, given the time it was made.

The player is dismissed and sent-off to interview the successful altruistic humanitarian Victor Ambrose, who’s almost too humble for words. At first glance he’s wonderful, but you’ll later find out this guy, with his endless list of charitable projects, does just seem a little too great, doesn’t he? Tim doesn’t think so, and he mulls over this primarily through inner-monologues, which follow after almost every major event in the story. The monologues are actually well voice-acted, for one, and give some much-needed insight into the protagonist, who’s otherwise a zombie in his live-action scenes. Tim, finding himself amidst some rather grisly murders that begin happening around the city, suspects something is awfully wrong and decides to take matters into his own hands. 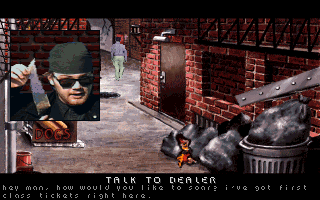 It’s clear from the get-go the Bala brothers were fans of older FMV adventure titles, particularly Tex Murphy’s Martian Memorandum, and Noctropolis (which more or less serves as its spiritual successor to the former, anyway), with whom the game shares most of its similarities with. From the digitized sprites and meticulously-painted backgrounds to the small rectangular dialogue clips of the actors stumbling and stuttering awkwardly line-over-line, it seems to have heavily influenced their own style of design from the ground-up. From a purely technical standpoint Synnergist ends up doing the whole shtick a lot better, building upon a lot of where the other two fell short.

The game works around a two-click system. Left-clicking is primarily used for movement and as a “look” tool, right-click is used exclusively for interaction. It’s basic but it works well, and completely remedies the predecessors issues of obtrusive interfaces and confusing UI. Examining various things, you’ll often find a lot of the environment’s descriptions have a prevailing sense of wit and snark to them, which usually hit or miss. You can move freely around the settings and fast-travel between them at almost any given moment. Once you do, Tim holds out a subway map, and you pick where to go from there.

Venturing out among your available destinations you’ll find a somewhat typical cyberpunk setting, where crime runs amok, lowlives crowd the streets, and prostitutes offer themselves freely. Like Noctropolis and Martian Memorandum before it, the violence, sex, and drug content are mostly used as an excuse to give off an impression of being more sophisticated and mature. Strangely though, in this case, it kind of works. Despite being totally cliched, the world it creates is surprisingly fleshed-out. It helps that each locale has its own unique set of NPCs to interact with, and while Synnergist doesn’t make any attempt at characterizing them, they at least have something to lend to the world besides just taking up space. 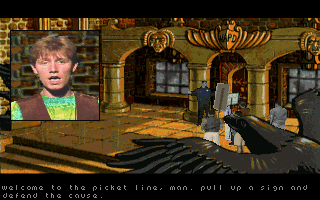 Future hippies? Sure, why not.

As the plot unfolds, you end up meeting a bizarre cast of characters including Jessica, who serves as a pretty standard love interest, and JoeTV, who runs a peculiarly idiotic pirate television broadcast. JoeTV himself seems to be a satire of something, though it’s not clear exactly what. The game never achieves any real sense of subtlety or self-awareness and instead goes an overt and callow route. This is prevalent in its characters, in its setting, and in individual scenes. The game’s seemingly random title suits it well after all, with much more attention clearly payed to the big picture or sum-of-its-parts, and everything else slowly trudging along behind it.

It doesn’t help either that there isn’t really any player interactivity in dialogue, either. In almost every conversation you only have one response option, and it comes off almost as a “click-to-proceed” device. Even when you do have more than one dialogue option, the outcome is exactly the same, so the gameplay’s focus naturally shifts to the puzzles. Like most adventures of the time, they’re nearly unsolvable without a walkthrough. Failing to do the “right thing” sometimes results in death, which is disappointingly a simple screen of text, rather than any sort of cutscene. 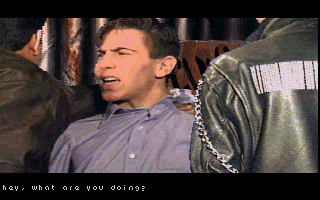 Despite the flaws the experience of playing the game can be described as oddly immersive and even trancelike if you let yourself get wrapped-up in its larger-than-life B-movie plot. Music is standard midi fare, and while it’s decent white noise, the atmosphere is carried almost exclusively by the game’s richly detailed backgrounds. They bring the cheesy-future environments vividly to life, and aside from the run-of-the-mill murder-mystery, they’re arguably the real star of the game. It’s odd, because Noctropolis had a similar case of its backgrounds stealing the spotlight. While this isn’t inherently bad, if the atmosphere isn’t enough to carry the rest of the game it ends up bringing the whole experience down with it. Fortunately though, in Synnergist, the rest is (just barely) able to hold its own.

Curiously enough, the game has pretty huge easter eggs that to this day have never been discovered. Back in the 90s, Coming Soon Magazine stated:

“The storyline to Synnergist is much deeper than it appears to be. There are some hidden easter eggs in the game that will reveal the secret to the game quite blatantly if found, and you’ll know what Synnergist actually means. Vicarious Visions is offering a big grand prize to the first five people to discover these hidden easter eggs within the game… The hidden areas will include new video sequences, rooms, puzzles, etc.”

It seems they were hidden perhaps too well, because 20 years later they’ve still not been found. Some clues have been uncovered, and it may be likely some brave souls are still looking, but taking to the Internet gives you very little by way of further information aside from what’s mainly the game’s own reviews and a longplay on Youtube. 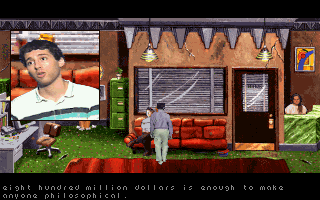 Synnergist comes together as a well-hidden gem of the 90s adventure gaming era, particularly for cyberpunk fans. The connection could also be made to Bloodnet, another cyberpunk adventure game of the 90s, but whereas Bloodnet plays it extremely straight and dull, Synnergist instead revels in its adolescent time capsule state and never seems to try to pass off as anything more. It’s the senior-year play in high-school where the cast essentially puts on one big show before they graduate and go on to pursue greater endeavors. Like you’d expect out of such a production, it’s filled with a certain innocent fervor and passion that doesn’t quite come out in all the right ways. Wherever it fails, it’s a shame, but almost to-be expected. But where it gets things right, it’s all the more enthralling. Objectively the whole game is really rather forgettable, but if you approach it with the same dream-oriented excitement the Bala brothers had back in 1991, it may just stick around for longer.