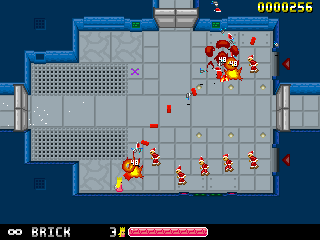 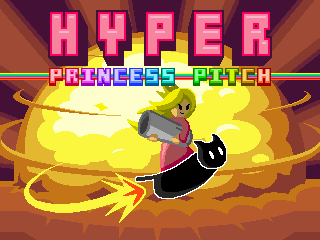 Operation Carnage was never the most well known of DOS games, and even if you consider yourself a fan of the platform, it’s quite likely you might not have even heard of it. Which makes it all the curious that Daniel Remar, creator of the excellent freeware title Iji, made a loose remake of it. It’s a great thing that he did, though, as what was once a pretty average Smash TV homage ended up becoming a great shooter that’s enjoyable all year round. Compared to Iji, it’s definitely a lighter, wackier game, but it’s still just as impressive, especially considering it’s free.

Every year, the good Mecha Santa and his legion of robotic elves deliver presents to the good children of the world. Growing up, the bratty Princess Pitch apparently wasn’t considered such, and for being snubbed, Pitch has decided he must pay. Mecha Santa has apparently foreseen this, and has filled the five stages of his toy factory with an army of robotic hordes and attack vehicles. Pitch, however, has a rapid-fire brick cannon, an impressive piledriver technique, and the fact that she’s the daughter of the Goddess of Explosions on her side. 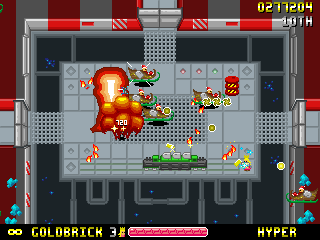 Each stage is made up of a series of interconnected rooms, each of which brings in waves of Mecha Santa’s minions. Most enemies will attack Pitch in a massive horde, while vehicles and turrets blast her from a distance with brightly colored bullets. While Pitch does a life bar, getting overwhelmed by the robotic hordes can quickly empty it, so making sure you’ve got enough space between you and the enemies is crucial. Pitch’s rapid-fire brick cannon makes short work of enemies. You’ll also need to make use of different ammo types Pitch can collect and fire, like an icethrower to clear away bullets, and rainbow shots that bounce off of surfaces, letting you hit hard to reach enemies more safely. 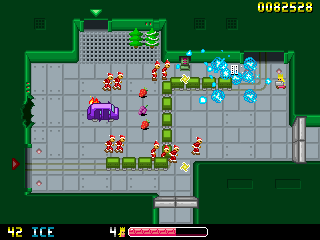 Pitch can also perform a piledriver by inputting a series of directions. It’s tricky to pull off, especially since messing up the input means that enemies will get the chance to swarm in you. If you can do it correctly, however, you can pick up the toughest of foes and slam them down to earth, clearing out some much needed breathing room for you. While you’re in the grappling pose, you’re also invincible for a short moment, which can help protect you from the bullet patterns the level bosses bring out against you. This is especially useful when you go up against Mecha Santa himself, who has a large array of tough bullet patterns that he’s each lovingly named.

It’s a pretty short game, overall, with even the highest difficulties only clocking in about twenty minutes. The short length, however, makes for a perfectly paced game that’s fun to play through again and again, slowly working your way up to the highest difficulty levels. If you line up all the Christmas-themed games out there that aren’t based on existing games, this may well be one of the best.