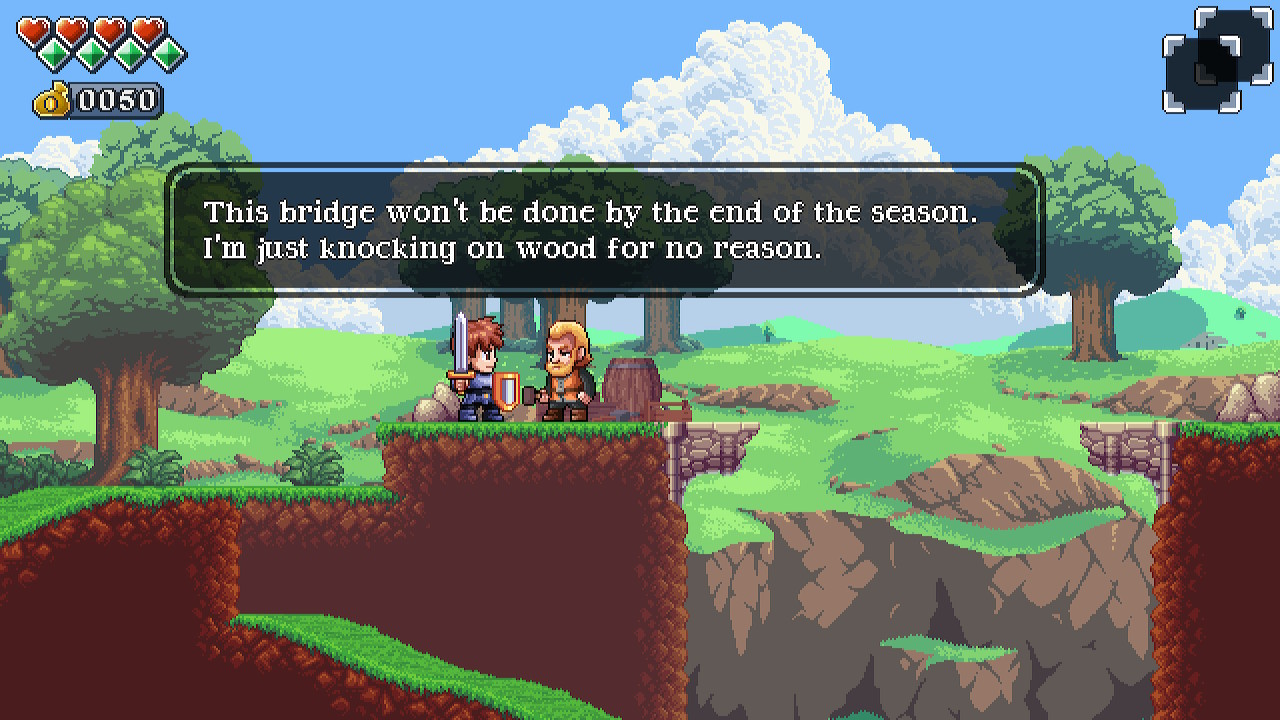 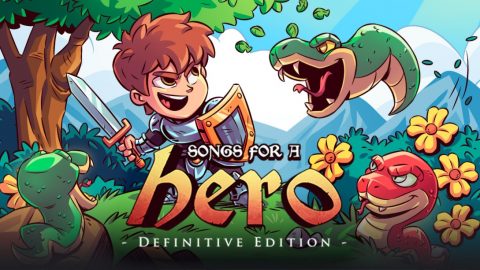 The video game market in 1980s Brazil was like a parallel universe to the United States. Instead of the NES reigning supreme while Sega’s Master System languished in obscurity, it was the exact opposite. Rather than Super Mario being the game franchise which defined many people’s childhoods, it was Wonder Boy. And when these Wonder Boy fans grew up, many of them brought their nostalgia with them. 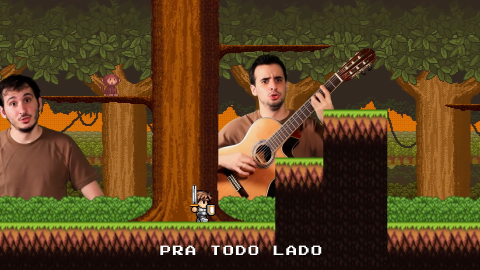 In 2012, two Brazilian YouTubers named the Castro Brothers made a series of comedic videos, named A Lenda do Herói (“The Hero’s Legend”). These videos feature retro graphics in a style which is a cross between the Sega Genesis and Sega Master System, and follow a knight in armor who goes on a quest to save a princess while the Castro Brothers sing about his adventure, pointing out and mocking video game cliches along the way.

The videos were a hit with the Portuguese speaking community, and many people mistakenly thought the videos were footage of an actual game. With people asking when this game was going to come out, the Castro Brothers turned to Kickstarter to raise money to make it into an actual game. The game, A Lenda do Herói, was eventually released on Steam in 2016.

While it enjoyed success with Portuguese speakers and was rather unknown in the English-speaking world, the game was eventually translated into English with the new name, Songs for a Hero. DLC was released, then later combined with the game under its new title, Songs for a Hero: Definitive Edition, which was released on Nintendo Switch in 2021.

So, now that we’ve covered its origins as a YouTube video, what is the actual game like? 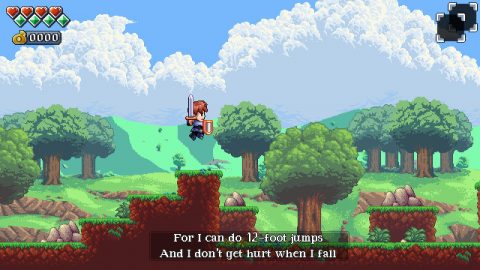 Songs for a Hero begins with ominous music accompanying a fully voiced plea for help by a princess, whose voice is becoming distorted as she calls out for a hero to save her. We then cut to the hero, lying in bed with his armor on, almost as if the game took his standing animation and flipped it sideways as old video games did to save graphical space. He wakes up and sings, “Sleeping with my armor on was really for the best, I won’t have to waste more time, I can start my quest!”

It’s clear that we’re in for one silly ride.

Songs for a Hero is a platformer which plays, unsurprisingly, like the more RPG-ish Wonder Boy games from the 1980s. The concept is that it’s basically trying to be the playable equivalent of the YouTube video – as you control the hero, he himself (as opposed to the YouTubers) sings about his quest, making fun of what he sees.

And there is a lot to make fun of. Video game tropes both modern and classic are very strange if you actually think about them, and the game front-loads many of its funniest jokes at the beginning. 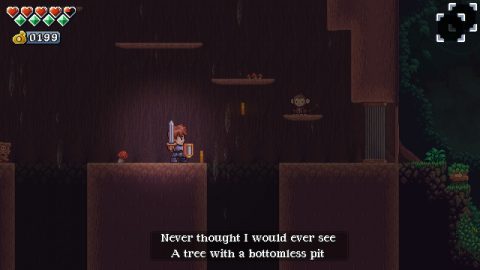 There are jokes about the basic jumping mechanic used in platformers (“For I can do 12-foot jumps, and I don’t get hurt when I fall”), the concept of floating platforms (“What do I see, a piece of the ground, just floating in the air?”), bottomless pits (“But I’m at zero altitude, how could this possibly be?”), how enemies drop coins when killed (“Creatures that leave an assortment of items in their wake, how weird is the diet of these snakes?”), enemy generators (“How can there be so many bees inside that hive? It doesn’t make any sense, it shouldn’t fit more than… five.”), people who make beeping noises when they talk (“Your voice is weird, doesn’t sound like you’re speaking, but for some reason I can understand the meaning.”) and many more.

The instrumental part of the music plays on loops, allowing the game to choose lyrics that fit the rhythm, or even switch to a different loop for other lyrics and to reduce repetition. Lyrics are chosen by a combination of location, behavior, and even sometimes at random. Playing a level multiple times sometimes reveals additional lyrics which have a random chance of playing. If you haven’t encountered anything that would trigger additional lyrics yet, the music continues playing on a loop, until the next set of lyrics kicks in. Sometimes, to sync lyrics with the music when the player encounters a character or important item to sing about, the game will stop the action for a few seconds and wait for the next stanza to play. 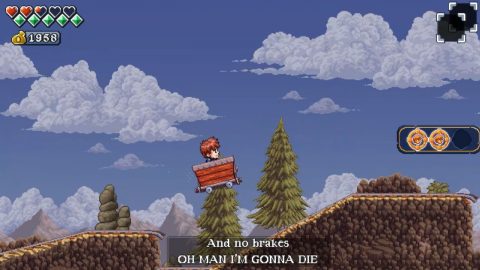 Standing around and doing nothing sometimes triggers lyrics relating to just that. So does crouching for a long time. Along with being low on health. There’s no singing during boss fights except at the start of the fight, as timing lyrics to the fight would be especially tricky.

The singing gimmick runs the risk of getting old and running out of steam, and the game does have issues with its joke material over time. Eventually, most of the major game clichés that can be mocked have been shown, and many of the lyrics are instead about the hero’s courage, ego, and singing prowess, with fewer new video game clichés to joke about. Sometimes things pick up in levels which introduce numerous gimmicks at once such as mine carts or spiky plants, and plenty of lyrics to joke about those things. But the level of parodic singing goes up and down over the course of the game.

Unfortunately, there are also joke opportunities that are missed. There’s plenty of jokes that could be made about how reading a scroll magically enables you to swim, or how a swordsman takes only two seconds to teach how to swing your sword more quickly, but these moments lack the comedic value they could have had, since there just aren’t funny lyrics about them. 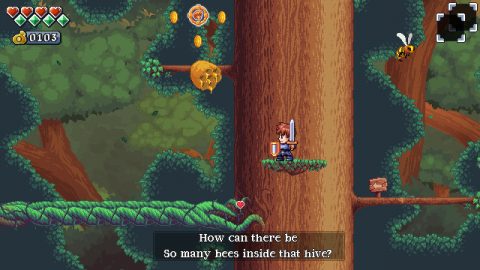 Songs for a Hero is essentially a Wonder Boy/Monster World ripoff, but it has modern elements as well. At first you can only jump and swing your sword, but you gradually gain new abilities such as using your shield to block projectiles, shooting fireballs from your sword, and more advanced abilities such as mid-air dashing and firing a grappling hook. After obtaining these new abilities, you can use them in previous levels to find previously unreachable items and secrets. There are also numerous health and magic upgrades found in levels, and purchasable in a town which itself has many humorous elements such as townspeople who speak in rhyme and parody video game clichés themselves.

The platforming and combat are basic and competent. They feel retro and lack the flourish and variety of moves that might be expected from modern games, but play similarly to the old Wonder Boy games. In short, this game not only looks retro, but mostly plays retro. It even has a lives limit and earnable extra lives, with game overs forcing players to restart from the beginning of a level rather than checkpoints.

There is a map screen, but all areas are in a linear order and with the exception of the DLC levels, there’s no playing out of order. Later levels become more complex and challenging as the game goes along and as the player gains new abilities, so if you’re seeking more of a challenge, you’ll eventually find it. Furthermore, the game is surprisingly long for something based around a gimmick. Doing both the main game and DLC could potentially take over 8 hours. 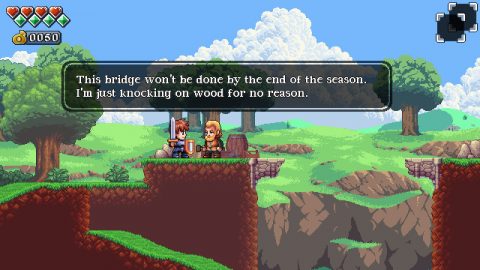 The DLC, which is included with the Definitive Edition and becomes reachable at certain points in the game, does add new things to the game in terms of its presentation. There’s DLC with a horror theme that includes a new singer, DLC with a samba theme that includes different new singers (including an announcer during a boss fight), and “epilogue” levels playable after the core game’s ending, that introduce a woman who duos with the hero as they adventure together. All of these introduce new levels and even new styles of music, keeping things fresh. And having been designed after the base game’s release, they also provide more challenge and some new gimmicks. Completing the hidden epilogue levels earns the true ending.

If you’re a parent wondering if this game might be right for your kid, there are a few things to know about. The word “hell” is occasionally used as a profanity in the lyrics, but no other profanities are noted. The Songs for the Dead DLC might spook some younger players, though it does have an “it was all a dream” ending that should mitigate some of the scariness. Otherwise, the game is family friendly to the core.

If anything, the bigger issue might be if kids even get the jokes. Songs for a Hero is mocking the clichés of 2D platformers, a genre that’s not as popular now as it was in the past. Jokes about rafts that move on their own, or branches that break off from trees when you walk on them and then magically reappear, might be missed by an audience that hasn’t played games which feature these quirks. But the sheer silliness could still be funny even to someone who’s unfamiliar with the material being spoofed. 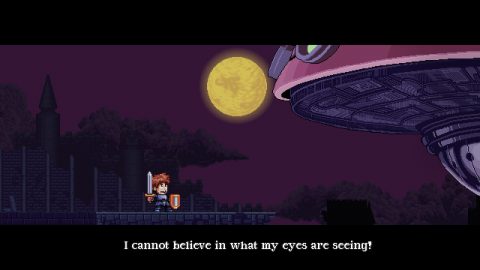 When it comes to other issues with the game, the game sometimes crashes seemingly randomly, usually at the beginning of a level or while loading. On a more minor note, there are also some moments where the game chooses the wrong lyrics for something that’s not happening – for example, lyrics about going down a waterslide when the player hasn’t even started yet.

Songs for a Hero is ultimately a fairly solid game based around a funny and well-designed gimmick. It’s a humorous Wonder Boy homage with some modern differences, starring a relentlessly singing hero who makes fun of the things that gamers have typically taken for granted. For some players, that’s all they need. If nothing else, it’s a game with a unique hook not found in any other game out there.