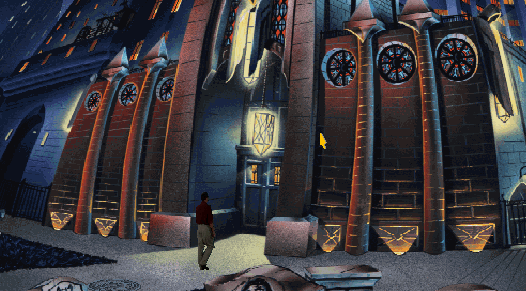 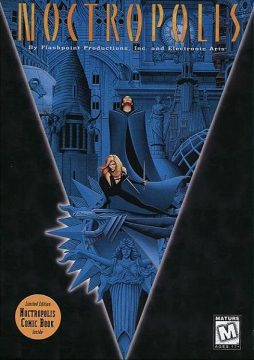 Here’s a pretty common fantasy trope – a despondent boy or girl finds themselves swept into an alternate world, where they find both adventure and a fulfilling sense of purpose missing from their own lives. Noctropolis, developed by Flashpoint Productions and published by Electronics Arts, toys with this a bit. Instead of featuring a young character and casting it as a coming-of-age story, Noctropolis features a middle-aged man named Peter Grey, the divorced owner of a failing book store. He ends up winning a mysterious contest which transports him into the world of Darksheer, his favorite comic book series. Sadly, Darksheer has retired, so it’s up to Grey to take up his cape and defend Noctropolis, a city perpetually in a state of darkness, from a series of maniacal super villains.

The concept is an interesting inversion, if mainly because it suggests a lot of potential – how can the world of fantasy fiction heal the soul by invoking one’s inner manchild? Sadly, it never even approaches that territory, and uses the “maturity” as an excuse for violence, naughty language and an occasional set of bare breasts. The game was published in the mid-90s, as the CD-ROM craze was coming into full swing, and games like Ripper, Hell: A Cyberpunk Adventure, and Phantasmagoria were purporting to elevate gaming to a new level, with dark storylines and real actors. Noctropolis is better than any of those, although not by much. 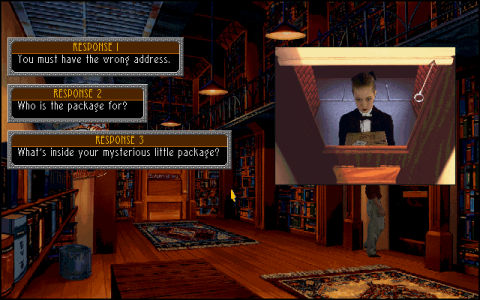 Indeed, there’s a lot that just seems off about Noctropolis. While the developers obviously had a love for comic books, which shows through in both the two issues of the Darksheer comic found in game (included in the packaging in the initial release) and the gorgeously painted backgrounds. The visuals are rendered in SVGA and it does tend to look quite stunning, particularly in its attention to gothic architecture. Then it goes and completely shatters all of that by relying on digitized actors, which completely clash with more or less everything.

The interface is weird, too. Even though the game is displayed in the third person perspective, you can’t just move anywhere on the screen, and can only walk to certain predetermined points. Everything is controlled by the mouse, but you can’t cycle through verbs. Instead, you need to right-click every time and pick a verb from a menu. The cursor does not indicate hot spots, and nearly everything you need to pick up is either really tiny or shrouded in darkness. On the other hand, when you use an item from your inventory, the game will take over and solve any puzzles automatically, reducing the need to click everywhere on the screen. As a result, the puzzles are not particularly difficult, but the most frustrating ones are the kind where you missed a tiny bit of pixels in some scenario hours before. You can retrace your steps at any point, but it still feels tedious. 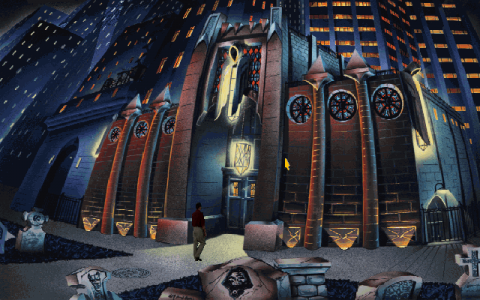 In many ways, both with its obsession with FMV and its interface, Noctropolis feels a lot like the spiritual successor to Access’ Martian Memorandum. (The designer, Brent Erickson, worked on both games, solidifying the links between them.) Conversations are displayed in full motion video, usually in a small window, each with a number of dialogue choices. Assuming you navigate these trees correctly, you can interrogate them about the two dozen or so topics you’ll need to investigate. These are handled without video or voice, relayed only in text, presumably to save space. As one might guess, the actors aren’t exactly great, and it’s all quite cheesy.

And then there’s Darksheer himself. In the comics Darksheer seems like bit of a badass, but you do a totally pathetic job of filling his shoes. His only powers include wearing a cape – not even with a mask! – and his special tools include an item that can make him temporarily invisible, and a grenade. Yes, a single grenade. (Although to be fair, it can recharged, although you use each of these items precisely once.) Throughout the whole game, you’ll run into each of the city’s old nemeses, including Succubus, a sultry vampiress with a taste for lingerie; Greenthumb, who is covered completely in plants; Tophat, an actress with a taste for torture; Drealmer, who can infest people’s dreams; Master Macabre, a sadistic doctor; and Flux, the mysterious character who brings them all together. Some are decent homages – Tophat is a bit like a female version of The Joker, and Drealmer is Freddy Krueger with a lisp. On the other hand, Greenthumb may as well have been taken from Darkwing Duck.

In almost every one of your encounters with these baddies, you get the tar kicked out of you, usually quite embarrassingly. When you run in with Tophat, she ties you to a board, surrounds you with flames and throws daggers right into your legs. Your only escape is to wait until the dopey janitor comes up and lets you down. It doesn’t help that most of the time, you don’t even get to truly defeat your enemy – even getting to nail them in the face would’ve been somewhat gratifying. Many of them end up escaping safely, robbing you of any sense of heroic catharsis, and leaving you badly beaten up. In any of these situations when you’re mortally wounded (all of which are part of the scenario and are unavoidable), a timer pops up and begins to count down. You need to reach your headquarters to heal yourself, or else you’ll die. Usually these time limits are pretty generous, ranging from five to twenty minutes, depending on the scenario. Surprisingly, other than the timed segments, there are very few other spots where you can die. The most frustrating part is one where you need to sneak into an observatory and avoid a series of spotlights, but since you move so slowly and the interface is so cumbersome, it’s hard to properly complete without dying dozens of times. 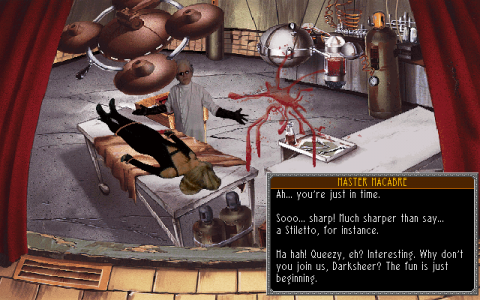 Darksheer is a weenie, true, but then there’s Stiletto, his sexy fair-haired sidekick. When you first meet her, she’s a lousy drunk mourning the loss of the old Darksheer, but she quickly warms up to you once she realizes you can handle yourself in a fight. She wears a tight black latex catsuit which shows off her ample cleavage, and is played by an ex-Playboy Playmate, Hope Marie Carlton, AKA Miss July 1985. Her only super powers include playing up her whorish qualities to get men to comply, and getting kidnapped. In other words, even though she follows Darksheer more or less everywhere (when she’s not being held hostage, anyway), she doesn’t do a whole lot, other than fulfilling the Electronic Arts marketing department’s promise of naked boobies. Which are, to be honest, pretty disappointing.

In spite of the lousy main characters, there are actually a few pretty decent scenarios that stand out pretty well, although they’re buried in the second half of the game. One involves Darksheer and Stiletto exploring a labyrinth beneath the city, and another takes place in a dark dreamscape. Neither would be compelling without the absolutely outstanding background artwork, especially in the nightmare level. In one area, there’s a series of gigantic wine glasses filled with bloodied organs. There’s also an unnerving obsession with gigantic clown heads. The twist at the end of the game isn’t particularly surprising, but elements of it are well orchestrated, enough that it bolsters the overall storyline once you’ve completed it.

Although it has its moments, it’s really hard to tell if Noctropolis is supposed to be a parody, or if it’s just sloppily done. The writing, while decent, is quite self-serious and doesn’t suggest any real sense of comedy, but the high school drama club acting and the sad-sack storyline suggest otherwise. Even as a C-level multimedia production, it never quite reaches the “so-bad-it’s-good” level, and it never embraces its low production values the way the Tex Murphygames did. There’s some enjoyable bits, but there’s still a prevailing sense that the game fell short of its goals, making the whole experience feel a bit empty.