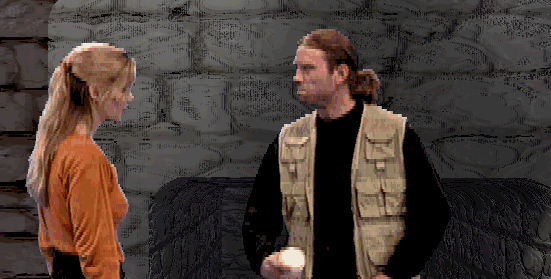 Would it be too harsh to criticize Roberta Williams? She was undoubtedly a pioneer of the adventure gaming scene, but years and years of genre evolution have revealed that maybe she wasn’t the best game designer. Still, while Mystery House and King’s Quest remain important landmarks – the former for introducing graphics to text adventures, the latter for implementing full visuals and character controls – Phantasmagoria doesn’t command nearly the same respect. It’s certainly revolutionary in combining full motion video of live actors with the framework of an adventure game. History eventually confirmed that FMV-based games were an evolutionary dead end, however, marking Phantasmagoria as a call-to-arms for a war that never happened.

It didn’t help that, by most accounts, the game was pretty bad. 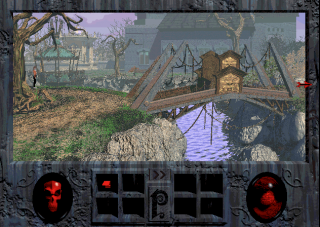 By the mid ‘80s, Roberta Williams was still mostly known for her fairy tale style King’s Quest, with a few dalliances in murder mysteries with the Laura Bow games. Phantasmagoria was to be something different, a truly adult horror story. If King’s Quest IV dared to make gamers cry, Phantasmagoria dared to give gamers nightmares. It’s an admirable attempt, but like practically every FMV-based game, it falls victim to two things: terrible production values and incredibly sparse gameplay. 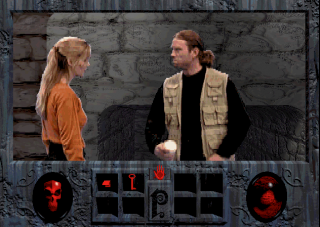 The story of Phantasmagoria is cribbed almost directly from Stephen King’s The Shining. Donald Gordon and Adrienne Delaney, a young married couple from Boston, find an astonishing deal on a gorgeous mansion out in the boonies. It is, of course, haunted – as if the room full of weaponry and the functioning electric chair weren’t some kind of tipoff. As Adrienne begins to explore around the mansion and discover all of its secrets, Don gets possessed by an evil spirit and begins acting psychotically abusive. Furthermore, Adrienne’s sleep is disturbed by gruesome nightmares. As Adrienne eventually discovers, the mansion was previously owned by a magician named Zoltan Carnovasch, who had more wives than Henry VIII. (The “Phantasmagoria” is the name of an escape trick wherein he’s tied to a chair and must escape before his head is sliced by a swinging blade.) Each of his ladies died under tragic circumstances – it should be no shock that he was possessed by a demon and murdered them. It should also be no shock that the same demon that inhabited Zoltan has inhabited Don, whom Adrienne must outwit in the climactic chase sequence of the final chapter. 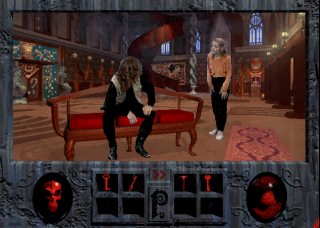 As any horror fan can tell you, suspense is all in the buildup. The plot is so easily telegraphed that you can figure it all out within the first five minutes of play, but there are seven whole CDs to be filled. A good chunk of it involves Adrienne wandering around the mansion, unlocking previously locked doors and conversing with the sparse townsfolk. It feels like time ill spent – there is literally one whole chapter (and one whole CD) solely devoted to Adrienne visiting town and buying drain cleaner. As such, it feels more like you’re just clicking hotspots until the next video sequence plays. 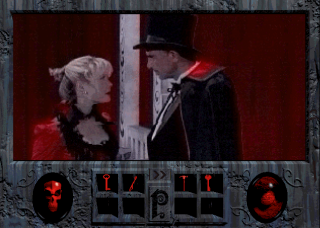 Phantasmagoria arrived a few years after Myst, and its design seems to be trying to capitalize on the casual audience that made Cyan’s game such an enormous success. It was also released during a time when clicking around and looking at the pretty pictures was considered an acceptable game mechanic. To be fair, in Myst there were at least some puzzles so it justified itself as more than just a slideshow. Phantasmagoria has puzzles in a vague sense, inasmuch as there’s an inventory, and occasionally you’ll need to use items in other places to move on. These are never actually difficult, but most of the trouble lies in figuring out exactly where the items are. Your directions are rarely clarified in the narrative, requiring you to hit the red skull button on the bottom of the screen, which gives you not-so-subtle clues to your current goal. The game also realizes that maybe players could get stuck – in which case you can immediately start at any of the seven chapters, although you usually miss some introductory videos. Up until the late stages of the game, there’s no way to die, either. The final gameplay segment is the type where you need to click on very specific items in a short period of time or else you’ll be killed. It’s intense, yes, but not much fun when you have to do it over and over. 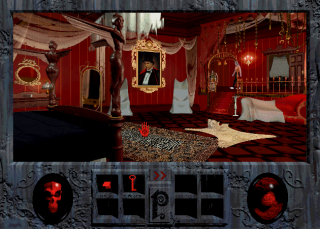 In spite of how large and detailed the mansion is, there’s not much to interact with. Phantasmagoria eschews the multi-icon interface of Sierra’s earlier games in favor of a single cursor to move around and interact with stuff. You don’t directly control Adrienne, but rather, she stands faithfully, arms at her side, staring off into nothingness. That is, until you click on a hotspot, after which she’ll take a few steps towards it and the scene will transition. There’s no “look” command, and very few hotspots. The SVGA backgrounds are quite pretty – they were rendered in that time in the ‘90s when computer generated graphics were very artificial but still attractive, and the mansion and its grounds are still appealing, even today. The fact that it’s so devoid of other characters lends to the sense of isolation, and it does feel rather creepy. 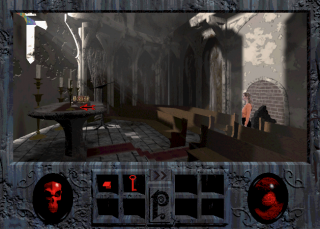 Despite all of this, there’s still some incongruity in the visuals. Although there are some video cutscenes, which play at a lower resolution and are a bit blocky, most of the action consists of the live-action characters walking over the CG backgrounds. The visual quality of the actors varies, but they always look out of place against the backdrop. It doesn’t help that there are still some traces of ghosting around their edges, a remnant of early blue screen technology. The main musical theme is a standard Gregorian chant – clichéd, but effective. The rest of the music is MIDI, and while it’s pretty decent, its tinniness on an FM synth card does it no favors. 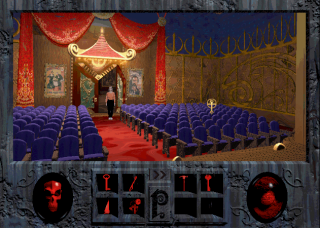 Beyond the vapid game design and mixed visuals lies the video sequences themselves. Let’s be honest – the production values are awful. Adrienne, played by Victoria Morsell, isn’t too bad. Although you never see much of her personality, she plays the role well, and her acting is rarely cringe worthy. Don, played by David Homb, is far too over-the-top to be taken seriously. But even they are better than the embarrassing supporting cast. 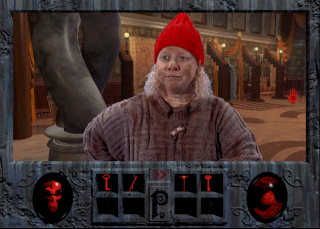 There are numerous scenes that are meant to be disturbing that instead come off as ridiculous. Many of these involve Harriet, a homeless lady living in the mansion’s yard, and her mentally challenged son Cyrus. There is a scene where Cyrus is up against a wall, doing something nasty to Adrienne’s cat. The way the scene plays out, Adrienne walks up behind him and basically says, please, stop beating my cat. He looks confused, puts the cat down, and then walks away. It’s all extremely awkward. Perhaps Williams had shades of John Steinbeck’s Of Mice and Men in mind, but it doesn’t play out that way at all. What’s even weirder is that the guy who played Cyrus, Steven W. Bailey, is the only cast member to graduate into a successful acting career, eventually landing a prominent role on the ABC medical drama Grey’s Anatomy. 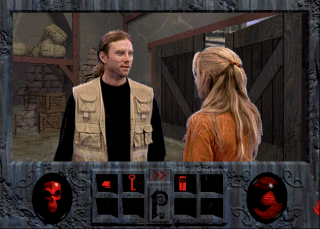 Although the game is filled with weird moments like this, by far the worst is the much vaunted rape scene, which seems to have been inserted solely to prove how “adult” Phantasmagoria was. It worked – it garnered tremendous PR, it was mentioned in every preview in every magazine, computer gaming or otherwise, and it even got into a bit of trouble with retailers, especially considering there was no ESRB back in 1995. But it’s still really badly done. It’s actually not too graphic and starts off relatively tastefully – as tasteful as a rape scene can be, anyway – as Don seduces Adrienne gently but quickly grows violent. As Adrienne falls to the floor, weeping, Don looks off into the distance, furrows his brow in befuddlement, wipes the hair out of his face, and then sorta just wanders off the set. The gravity of the scene is totally ruined. The whole production is just as bad as any of the Z-grade movies that have been parodied in Mystery Science Theater 3000 over the years, but even most of those never held the deluded self-importance that seems to permeate Phantasmagoria. 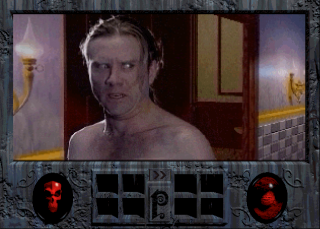 About the only time that the game ever becomes truly enjoyable is during the climax, when Adrienne stumbles upon the ghosts of Zoltan and his dead wives. These poor girls each had a hobby/vice, which Zoltan then used to kill them in ironic manners. Naturally, these scenes are quite gory. Later, when Don really gets violent and sticks Adrienne in Zoltan’s torture device, it also gets fairly bloody. When a cheap-looking CG demon pops out of Don and tears Adrienne’s face off, it’s even absurdly gruesome. All of these death scenes manage to be squeamishly horrifying and grippingly intense, so at least that’s one promise that the game fulfills. At the same time, they’re also amusingly silly, something which was a bit of a trademark of early Sierra games. Like the rape scene, these were probably meant to be taken completely seriously, and they sort of veer off the mark 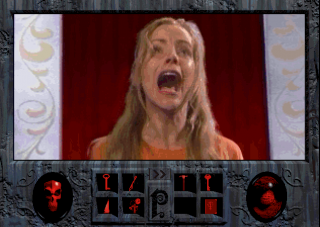 So Phantasmagoria is really just a bad game – it’s something that would struggle to qualify as a direct-to-cable movie, and only barely earns the “graphic adventure” moniker. It’s actually surprising that Roberta Williams herself picked this game as the one being most representative of her career – it probably should’ve been the one that she would want forgotten.

Phantasmagoria was developed for PCs, with DOS and Windows versions shipping on the same discs. However, it was also ported to the Sega Saturn, although that version was only released in Japan by Outrigger and renamed Phantasm. It’s stretched out to eight CDs, and comes in a slipcase that holds two double size CD cases, making it the largest game available on the system. Due to its contents, it was also given a “yellow” age warning, suggesting it’s only for gamers 18 and older without being offensive enough to get a “red” rating, which marked softcore porn. The port is faithful, although everything is dubbed in Japanese. The FMV quality is a bit worse than the PC version, seeing as the Saturn didn’t have great video compression (without the MPEG card, anyway, which this game does not support), but it’s passable. The visuals do suffer during the gameplay segments due to the drop in resolution. The graphical interface framing the main window is gone, though, leaving only black borders. 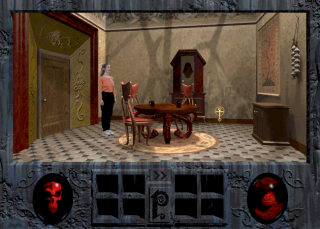