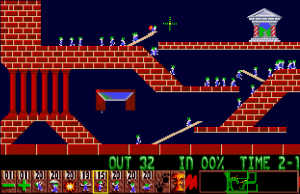 Shortly after the release of the original Lemmings, the game proved to be so popular that an expansion pack was created. This time around there are 100 new levels, split into five difficulties: “Tame,” “Crazy,” “Wild,” “Wicked” and “Havoc.” There are no engine improvements, but there are new graphics and songs, along with new traps, including the “ketchup wheel,” which turns any lemming that walks under it into a blood splatter, hence the name. 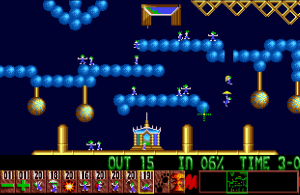 The “Tame” levels are an absolute breeze to get through, but once you hit the “Crazy” difficulty, the game ramps up the challenge and never lets up. It’ll take even more split-second timing and knowledge of how the game works to beat most levels. It’s funny, years before Japanese ROM hackers took Super Mario World and created levels that forced you to exploit the game’s idiosyncrasies to win, a Scottish game developer was already doing that years ago with their own game.