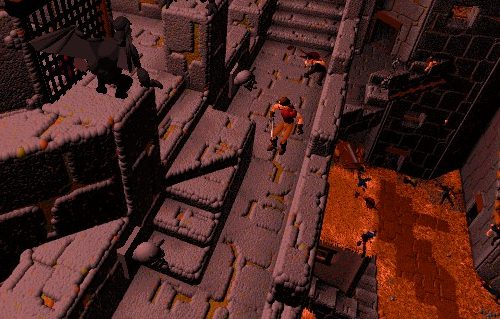 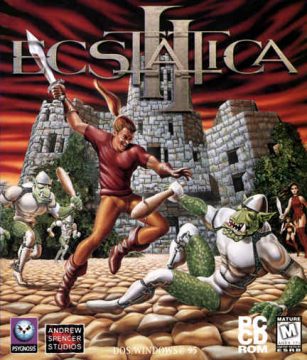 The sequel picks up right where its predecessor left off, with the hero (male only this time) and the witch-in-training Ecstatica fleeing from the forsaken village. Their good fortune doesn’t last forever, though, as the couple is beaten by a horde of monsters and imprisoned within a gigantic castle fortress. After escaping, it’s up to the hero to once again to rescue the damsel, so the two can escape with their lives. 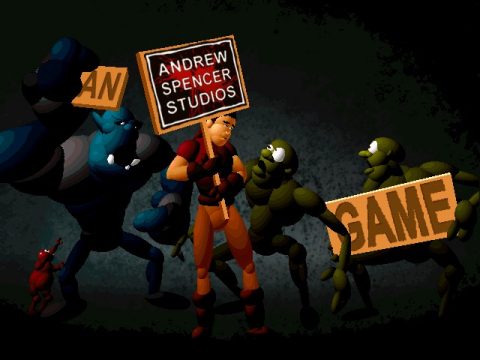 Ecstatica II offers many improvements, and vastly expands upon almost every aspect. The game can now run in SVGA, with much smoother ellipsoids, and the models are far more detailed, to the point where they more closely resemble humans, although they still aren’t textured. From a technical standpoint, it’s much less laughable, but at the same time, from a certain perspective, actually ends up working against it. The bizarre, low-tech appearance of the characters is largely what lent to the appeal of the first game. Here, the orcs still have big googly eyes, but it’s still missing something. But it’s not only that – the random NPCs are gone, too. You get to rescue a priestess early on, who occasionally gives pointers via voiced lines, but that’s about it. Most of the bizarre humor is completely absent too, and it is sorely missed. There are still tons of bodies strewn throughout the castle, but even the violence has been toned down just a little. The visuals are much darker than its brightly colored predecessor, with a permanent blood red sky. 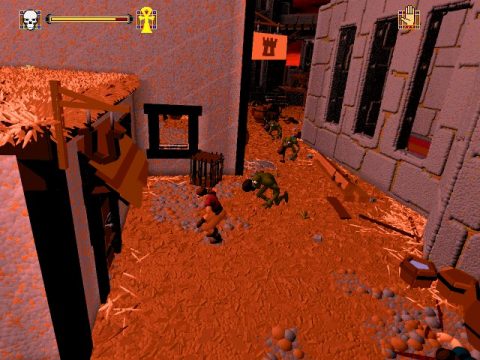 Ecstatica II‘s game world is also substantially larger than that of its predecessor, by several orders of magnitude. Like the first game, you’re still rarely given any clear sense of direction, except that you can’t open certain doors until you obtain items from later in the quest. The overall goal is to obtain several Eldersign pieces strewn throughout the castle. Obviously, this also results in a much, much longer adventure. 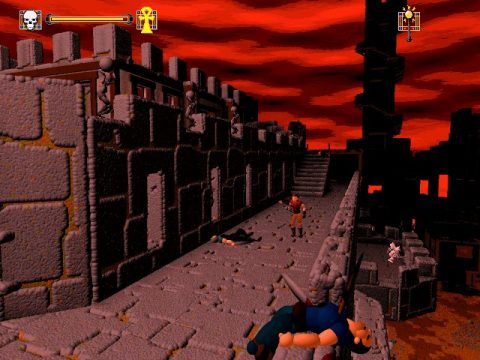 The first Ecstatica was more of a slow paced, survival horror type game, the kind that primarily focused on evoking a constant feeling of dread and despair. The sequel, on the other hand, is far more action focused. It loses much of the intensity, and instead trades it in for a sense of never ending chaos. It’s not uncommon that you’ll fight three or more enemies at the same time. Furthermore, they respawn indefinitely, and will almost never relent in their pursuit, requiring that you stop and fight every time something runs on to the screen. 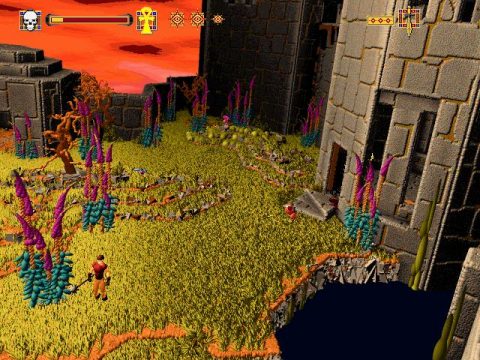 Thankfully, the fighting has been beefed up a bit – you now control your character with the arrow keys, and holding down Control will activate the attack stance while holding Alt will allow for a variety of acrobatic dodges. Your character also moves much faster, so it’s easier to launch attacks, but the hit detection still feels awfully dodgy, and it’s rare that you can find any camera angles that work to your benefits. There are many more weapons to find, including magical items, as well as several magic spells. The enemies are still fast, but they’re significantly weaker than in the first game, especially if you set the game on Easy mode. There’s actually a visible life bar on screen at all times, and enemies will occasionally drop health potions. You can also find treasure spread throughout the castle, which can be exchanged for a full life replenishment if you have enough dough. It’s quite expensive, though. 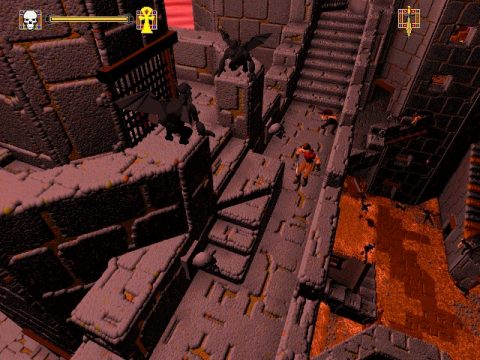 Ecstatica II is one of those sequels that sounds monumentally superior to its predecessor on paper, but not quite in practice. It’s larger and more complex, to be sure, but not necessarily better. Despite all of the new weapons and attack abilities, the amount of combat is tediously excessive. The huge castle is an architectural marvel to behold – almost up there with Sony’s ICO, which wasn’t released for another seven years or so – but there’s no in-game map, and it’s easier than ever to get lost, especially with all of the backtracking. Its ambitions should be applauded, as it still offers a fantastic, spooky world to explore, but it really could’ve used some refinement. 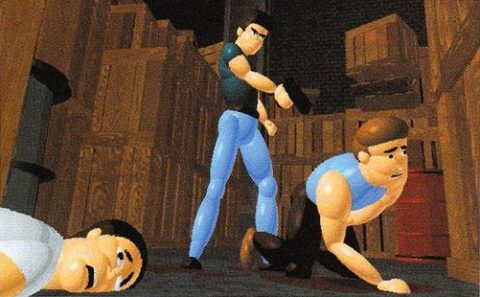 In between Ecstatica and its sequel, Andrew Spencer Studios worked on one more game that wasn’t a direct successor to the series, but also used the same ellipsoids technology. At least in the beginning – after the project was put on hold to finish Ecstatica II, it was to be reconceived as a polygon-based game, so development team member Ken Doyle. However, the de facto creative director apparently didn’t put up with that and quit the company. Then the whole project eventually fell apart. 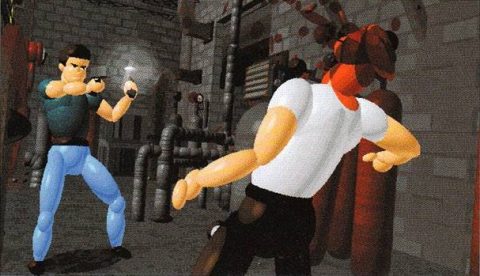 Urban Decay would have moved the scenario from medieval villages and castles to a gritty modern crime story set in the slums of an American city, but kept the same disconnect between the inherently goofy look of the graphics and lots of harsh violence (at least in its first iteration; there are no known images of that supposed polygonal version, if it even ever went that far) and the red sky from Ecstatica II.