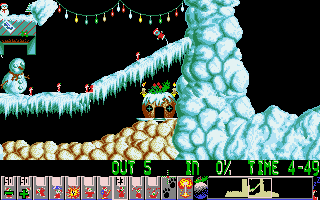 A thing several developers did in the early 1990s was release special Christmas versions of their games as an extra demo, and Lemmings was one of those games. Four were released for the holiday seasons, and they’re all mostly identical except for levels.

There’s a Christmas theme over everything now, even the menus. The lemmings are now clad in red coats and Santa hats, and even the entrance they fall out from is wrapped up in gift paper. There’s only one level theme, but there are a lot of animated decorations like bouncing snowmen that look pretty nice. The soundtrack’s full of MOD versions of songs like “Jingle Bells” and “Rudolf The Red-Nosed Reindeer,” which all sound pretty good. 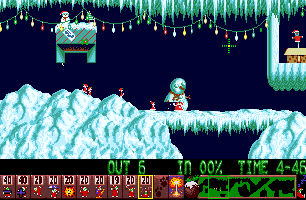 The levels don’t have any new features, although a lot of them give a pretty good challenge if you’re new to the game. For example, did you know that a lemming with the climber power who builds a staircase into a wall will turn around without climbing it? You better, if you actually want to beat these levels. 1991 has 4 levels, with two new Christmas levels and two from Oh No! More Lemmings, while 1992 has four new Christmas levels. 1993 has 16 levels split into “Flurry” and “Blizzard” difficulties, and 1994 has 16 new levels split into “Frost” and “Hail” difficulties, along with the 16 levels from 1993.

Both the Amiga and the DOS versions are mostly identical, although the DOS version still suffers from the same issues as its non-holiday version. The music on the DOS version also sounds different, since there’s no option for the DOS version to play MOD music. Overall, if you really want more Lemmings levels, this’ll give you a few hours of entertainment.