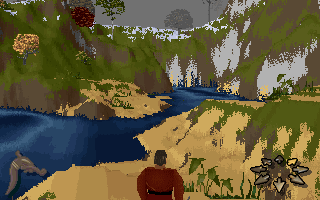 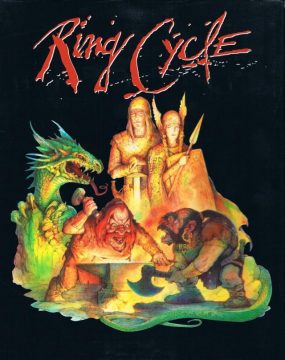 The late Mike Singleton used to be one of the heroes of the UK developer scene. His early fame was mostly founded upon his text adventure/strategy hybrid The Lords of Midnight, but later he became a household name for experimental 3D simulation/action games. Ring Cycle rehashes the engine of his previous effort, which combined both of his trademarks into a 3D Lords of Midnight, where players had to manage and navigate a whole noble house and their affiliates through a fractally generated kingdom. It was an awkward and flawed game, but ridiculously ambitious and full of interesting ideas. Ring Cycle, on the other hand drops most of the simulation elements, and what’s left is just a very awkard and flawed game.

To begin with, the game looks like a nightmare. The terrain outside and in caves is generated using fractals, which may look a bit artsy but also unnatural, and quickly grows tiring due to the utter lack of variation. The overworld is populated by horribly low-detail bitmap trees and shrubberies, and characters more blocky than Lego people. The only visually appealing part are the 2D illustration of the character’s faces during dialog. The controls are horrendous, too, as Siegmund is controlled entirely with the mouse, where moving the mouse up or down accelerates him hovering forward or backward, so it’s almost impossible to come to a halt without running into an obstacle. Besides the standard first person perspective, over-the-shoulder views are also available, but the camera can’t deal with Siegmund turning around or walking backwards. At least the music is good, but only because it simply uses excerpts from Wagner’s opera.

So only two small aspects of the game are good, but at least those are really good.

Based on Richard Wagner’s opera cycle Der Ring des Nibelungen, the game tells the tale of Germanic hero Sigmund, who has to find ten divine artifacts because reasons. At first, Siegmund can only wander around aimlessly, because he knows nothing about the whereabouts of the artifacts. Wait, let me rephrase that: Siegmund knows nothing. He knows not that he is supposed to be searching for the artifacts, nor what he is even doing right now. Or his name. It’s not just that he is clueless, what kills is the sincerity and confidence he displays about his ignorance. This leads to ludicrous conversations when our demented hero meets other people and “interrogates” them. At this stage, every single dialog unfolds like this:

-Greetings stranger. I am [name]. By what name may I know you?
-Alas, I have no name that I can tell you.
-Then what seek you in these parts?
-I seek naught but my destiny.
-What destiny is that, stranger?
-My destiny I know not. That is what I seek to discover.
-Then you seek the unknown. I can do naught to help you. Perhaps we meet again.
-If fate allows it!
-I must bid you farewell, stranger.
-Farewell, [name]!

To know anything, Siegmund first has to find runes that are dispersed all over the land. Luckily, there are talking stones which appear on the mini map and give vague directions (“No northeast, Siegmund!”) So Siegmund may learn to tell NPCs his name and ask for the artifacts of the gods, one rune at a time. If the item in question is close enough, they might even tell him that it can be found in a cave, and then the player has to go through the process of asking them for directions and distances seperately – every single time. The dialogs in general are so full of redundant phrases that are always identical and have to be clicked through one by one, that it quickly becomes a chore just to ask for the way. 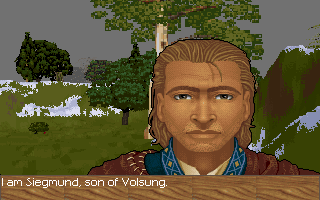 Yes, we know. In fact, we already knew it before you did!

Other runes allow Siegmund to ask for more general regions to find faraway artifacts, demand stuff from NPCs or challenge them to battle, upon which the game starts switching third person camera perspectives like crazy while the two combatants hack at each other automatically. Until he’s found a bunch of the artifacts, Siegmund usually loses. It’s also possible to pledge friendship with an NPC, which doesn’t have any obvious consequences. It’s only an option when interacting with men, though. when Siegmund converses with the opposite sex, it’s time for Romance:

-What seek you in these parts, Siegmund?
-I am in need.
-What is your need?
-My heart has been empty and I need the loving caress of a woman.
-My love I would gladly give to you, if you will accept my embraces, Siegmund.
-Your sweet embraces, I will gladly accept. Though we must part all too soon, you will forever burn bright in my heart. 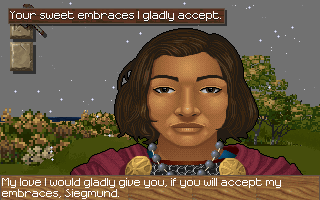 Ring Cycle hails from a time when RPGs were in decline and those that held on to the genre tried to counterreact by letting computers generate marches the size of the United Kingdom. Granted, the area here isn’t quite as big, Siegmund has a mighty stride, and there are (severely limited) items that allow teleporting around the map, but it’s still a ridiculously huge area full of nothing. The terrain being procedurally generated means it’s vast and mostly featureless. The regions may be given fancy names like “Land of the Giants” or “The Riverlands where the Rhinemaidens dwell”, but every place looks the same, aside from alternating between snow and grass, a few mountains and hills, and a large river (presumably the Rhine) going through the land.

Wherever he goes, the same dozen-or-so NPCs keep popping in and out of existence near Siegmund. Might as well, because all their lines are the same, no matter whether Siegmund chats with his supposed lover Brunnhilde or asks the villain Alberich about the ring Alberich made (Siegmund apparently even forgets who he’s talking to). The only deviations determine how they react to duel challenges and friendship offers (no woman would reject Sigmund’s romantic advances).

Sometimes hostile elves attack, whom he can take out with fireballs, and there are houses with nothing in them but ghosts who drop healing items and magical ammunition when given the fireball treatment. And that’s about it for the whole vast land of Ring Cycle. Well, that and the cave network holding the artifacts. Despite clearly entering cave mounds, Siegmund always has to go through a ghost house first, where he is dropped randomly – he might start right in front of the exit, or somewhere in the far corner of a convoluted maze. These are a nightmare to navigate because the corridors are so narrow, the field of vision so limited and the mouselook so oversensitive. When Siegmund finally reaches the cave, things are much more straightforward, and a voice keeps telling him the direction towards the nearest artifact. When walking underground, Siegmund covers much more distance compared to the overworld, which makes no sense but is convenient for shortcuts. There is also no danger here, so it should be a cakewalk to get to the target. The only problem: Some areas that show as passages on the map are blocked by much too low ceilings, including one that would be the only way to one of the artifacts. There would be a giant and a dragon to slay for Siegmund, too, but approaching one of them (who is just a tiny bitmap) without all artifacts in the inventory just warps Siegmund back to the overworld.

That’s the face the critics made, too.

So not only is Ring Cycle riddled with concepts that make no sense, drawn out by a much too large and empty game world and hampered by terrible controls, it also seems to be rendered unsolvable by a game breaking bug. At least no one bothered to investigate, as no hints or walkthroughs can be found online, and who would blame anyone for not wanting to bother with this mess?