At first glance, the second Kyrandia game – The Hand of Fate – might seem identical to its predecessor, as it runs on the same engine, and looks extremely similar. But the change in development staff marked a different direction for the series, one which embraces a quirkier sense of humor, and creates a far more interesting game world. 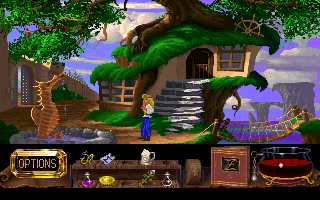 As King Brandon narrates in the intro, the land of Kyrandia is mysteriously disappearing into thin air, piece by piece, and all of the royal mystics are baffled. Conveniently, Marco the magician has just been joined by a human sized hand (think of a larger version of Thing from The Addams Family) who’s devised a plan to find an important artifact in the core of the planet. Zanthia, one of the more colorful characters from the first game and a skilled magician, is chosen for this undertaking, only to find her house robbed of all of her magical items. And so her quest begins to retrieve her stuff, and save the land.

From the get-go, Zanthia proves to be a more compelling character from Brandon. Right outside her house is a giant monstrosity that pops out of the mud to devour her. In a Sierra game, this would have been a solve-it-quick-or-you’re-dead puzzle, but here, without hesitation, Zanthia just grabs its tongue, ties it into a knot, and leaves it to sink embarrassingly into the swamp from whence it came. She’s cheery, if a bit exasperated by the situation, and remarkably resourceful, with a keen fashion sense too. Her outfit is always ruined upon reaching a new location, forcing a change of clothes with each area. She starts off in a hippie-ish blouse and skirt, eventually graduating to tropical dresses and ski outfits when reaching different climates.

Outside of Zanthia’s swamp, the world is much more fascinating. Her journeys take to her a rough-and-tumble pirate bar, where even the manliest men share their feelings with heartfelt poetry. (Zanthia herself delivers a stirring to ode to seasickness.) The entrance to the Center of the Earth is a strangely sleazy tourist trap, filled with sham guides and other such cheesiness. The core of the earth is filled with dinosaurs, and the final area resembles something of a modern ski resort. The backgrounds are brightly colored and gorgeous, again preferring pixel art over scanned backgrounds like LucasArts and Sierra titles.

There are also some running jokes regarding The Hand and his master, the incompetent Marco the Magician. It’s clear from the get-go that The Hand is the one behind this whole mess, but everyone is completely oblivious to it, despite the copious amounts of evidence. Marco himself is a doofus which an obvious crush on Zanthia, who reluctantly rushes to his aid on more than couple of occasions.

The puzzle design is also much, much better. As Zanthia is a master of potions, the amulet from the first game is replaced with a magic cauldron to mix ingredients. Zanthia’s spellbook lays out all of the necessary ingredients for everything you might need, but taking a note from the second act of The Secret of Monkey Island, you’ll need to do a bit of lateral thinking to find everything. One recipe calls for a toadstool – well, you won’t find any mushrooms, but you do run into a gigantic toad, who also happens to own a stool, so that’ll work. Most of the potions are pretty silly too, like the Sandwich Potion and the Teddy Bear Potion. Your inventory is also much larger, reducing the need for all of the item juggling from the last game. There’s still some annoying stuff, like the Tower of Hanoi puzzle at the game’s end, but otherwise it’s all fairly straightforward, and proves to be an immensely enjoyable experience worthy of a place amongst the adventure game greats.