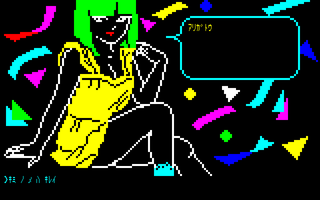 In 1966, Joseph Weizenbaum published ELIZA, a computer program that was meant to replicate human conversation. In its most famous implementation, ELIZA acts as a psychologist, asking the user assorted questions, and then using the responses to formulate further questions.

In 1984, Kogado developed (and ASCII published) Emmy: The Funny Game, released for the Japanese PC8001 computer. It too mimics human conversation, except there’s a visible representation of a girl. The goal is to get her to take her clothes off.

Some images further down are not safe for work! 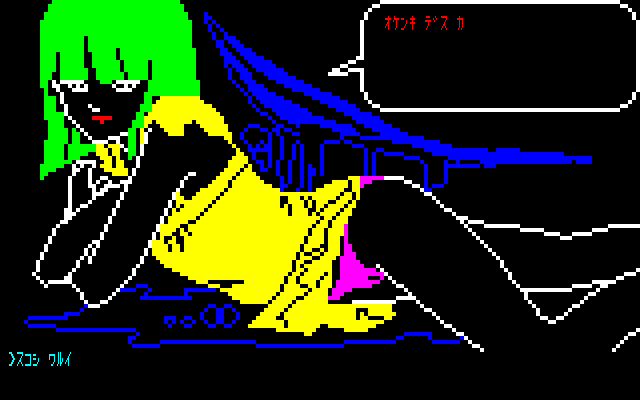 The parser and response is incredibly simplistic, compared to even the earliest implementations of Eliza. If you say things she likes, she’ll react positively. If you say something she doesn’t like or doesn’t understand, she’ll react negatively. Occasionally she’ll take note of the things you say and repeat them back. Sometimes she just sits there and giggles. If you manage to make her happy, eventually her image changes, slowly removing her clothes. If you irritate her, she’ll show you the door and dump you at the command line. If you have a printer, you can have it print out a record of your little chat. 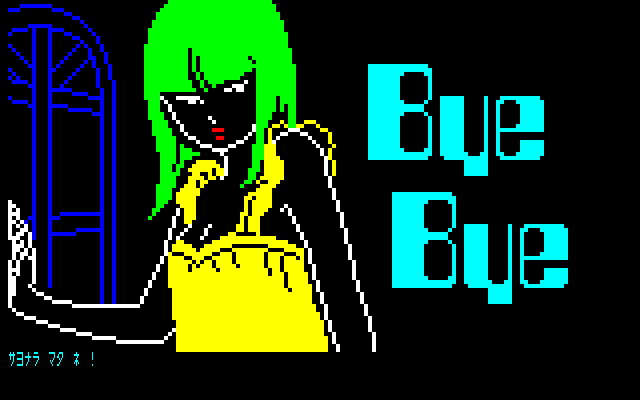 ELIZA was never really a game, and more of a Turing test, to find out how long it could fool users into thinking they were interacting with a real person instead of a computer program. This differentiates it from Emmy, where trying to figure out what she likes is ultimately the goal. Of course, what she likes is seemingly arbitrary, because the game’s vocabulary recognition is not very extensive. Genial pleasantries like “ogenki desu ka” and “konnichiwa” tend to be shrugged off. You can get dirtier, and she may or may not like it. She’s very hard to predict. There are canned phrases that she looks out for, like “kimi wa kirei” (“you’re pretty”) but you can’t use them too often. 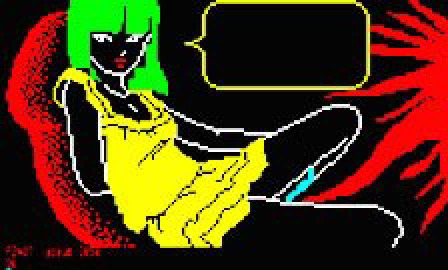 The art is designed in 160×100 pixels in 8 color mode. The coloring is stark – Emmy’s outline is white, while both the background and her skin are dark black, with yellow used for her dress, red for her lips, and purple for her panties. In spite of the extremely low resolution, the artwork is quite expressive, and it makes it very clear when you’ve pissed her off. Some of the coloring of the “props” she poses around are very odd though. A sequel, Emmy II, was later released. It was published later in 1984 for the PC8801 and FM-7, and in 1986 for the MSX2. In-game the title is “Emmy Virgin II”, but the “Virgin” is crossed out and replaced with “Version”. Ha ha! Sex humor. 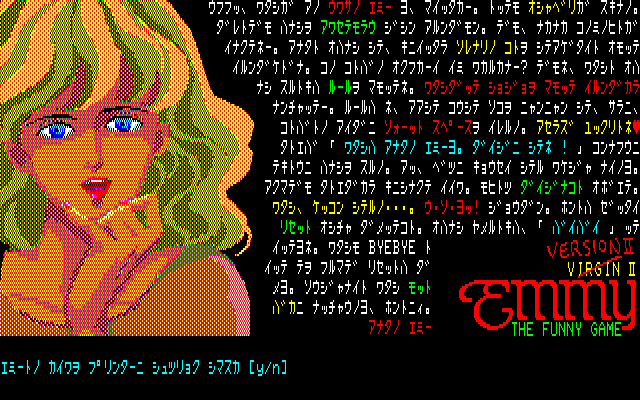 The concept is identical, though this version of Emmy is easier, in both manners of speaking. She won’t abruptly kick you out of the game like her predecessor, at least as often, and seems more willing to engage in nonsense lovey dovey talk. At one point I misspelled “konnichiwa”, at which points she repeated by mangled word and then told me she loved me. 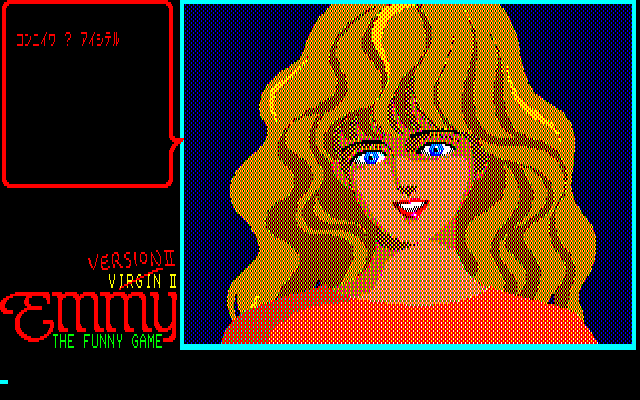 The cover of Emmy II uses a non-Asian model. In the PC8801 game, she’s a manga-styled blonde. But the MSX2 game uses digitized photos for a real life Japanese girl. The “adult” aspects of this version were removed. The visuals in both versions are very much improved over the original game, though it is missing its unique stylization. 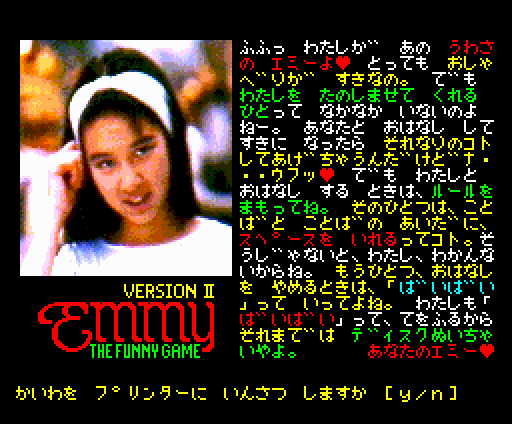 Considering that most ero games revolve around adventure games/visual novels, dirty mahjong competitions and gambling sims, the fact that the Emmy games are based around conversation makes it more noble than other similar types of games. It’s also easy to imagine some poor sap purchasing this game back in 1984. “WHAT DOES SHE WANT FROM ME?!?” he might say. “I JUST WANT TO SEE SOME NUDITY!”This 2009 article on Kotaku Japan suggests that Emmy might be the world’s first “gal game”. Of course, given the number of early Japanese computer games that focused on naked woman, that designation only makes sense depending on how you define “gal game”. 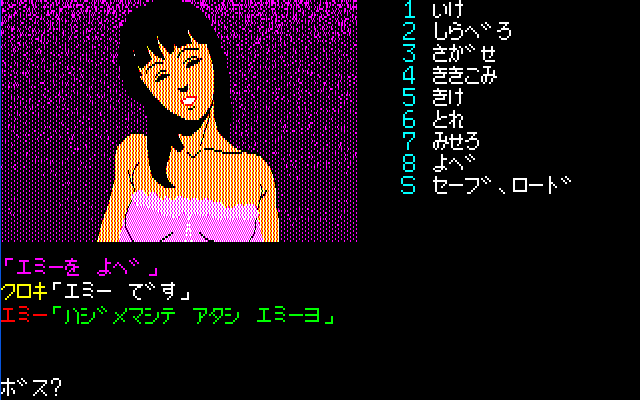