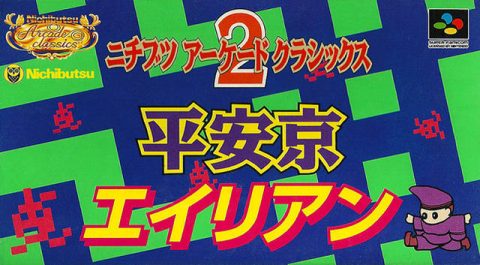 Five years the franchise remained dormant until Nichibutsu published Nichibutsu Arcade Classics 2: Heiankyo Alien for Super Famicom. Released exclusively in Japan, it marks the final console appearance of Heiankyo Alien. If the slapdash quality of this update is any indicator, it was best left buried.

Developed by Syscom, a company known for Pachi-Slot video games and whose only North American title is the PS2 helicopter simulation City Crisis, this port is pretty basic by most standards. As with the Game Boy title, there’s a classic version, an updated arrangement, and a two-player head-to-head mode. Aside from a variety of interesting controller options, there’s absolutely nothing new. 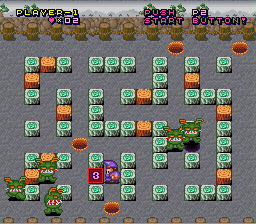 The classic mode is much better than the Game Boy’s, expanding the playing area thanks to the larger screen size. The new split-screen mode makes head-to-head battles far more entertaining. Despite these improvements, the port falls apart once you start up the updated game.

The first noticeable change is that the characters are incredibly ugly. While the kebiishi’s uniform does look more like a purple nightgown, it’s not the worst part. The brown and seafoam green blocks get awfully monotonous, and it wouldn’t be so bad if there was more than one alien design. The game is now back to one creature with little variation in their movement patterns. 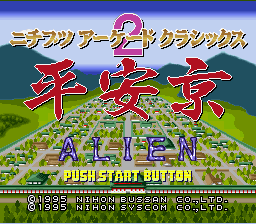 Taking cues from Bomberman, the player can improve their speed and digging speed by finding various power-ups. These can be discovered either through digging in random spots or killing enemies. Despite the new power-ups, the game also constantly throws out power-downs, meaning you have to be very careful with which items you grab. In addition to power-downs, random spots will cause more aliens or blocks to appear on screen, ranging anywhere from one to four extra enemies or obstacles. One nice feature is that the blocks can land on enemies when they appear, effectively killing them.

The game goes on for thirty rounds, with the stages always looking exactly the same. Most stages have only four aliens to start, meaning that even after level 20, some can be completed in less than a minute. With no increased challenge throughout the game’s hour length and no improvements over the Game Boy version, there’s little reason to try this game over any other port. 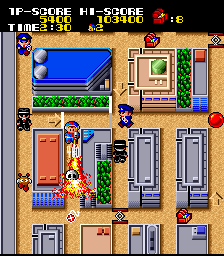 Before the SNES adaptation, Nichibitsu had actually licensed the Heiankyo Alien game in order to create its Kid no Hore Hore Daisakusen series. Although it features hole digging/enemy trapping mechanic, it’s hardly the trap-em-up that Heiankyo Alien is. The real goal of each level is to collect all the items available to exit the level through a door. With the use of other items such as flame throwers and bombs, you could play through the entire game without once trapping an enemy. The game had several sequels, including Booby Kids for the Famicom and Doraemon Meikyuu Daisakusen for the PC Engine. The latter was localized and released on the TurboGrafx-16 under the title Cratermaze, with the Doraemon character removed. 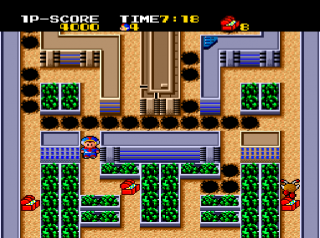 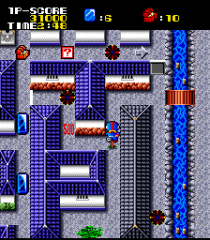