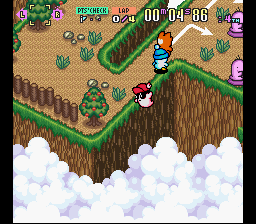 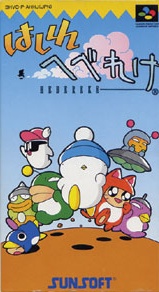 The first thing that appears after the Sunsoft logo when Hashire Hebereke is booted is a message in perfect English that states how this time our friends are going to RUN, RUN, RUN! And in fact the entire game revolves around a running tournament. The premise is once again the same, since Hebe is still in Ufouria and still needs to beat the other characters, but this time the method to beat them is to simply run faster. Or maybe it’s not so simple, because a lot of Super Mario Kart-style tricks and bonuses are involved. 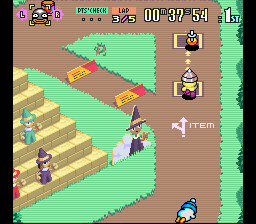 The race tracks are seen in an isometric perspective, and the options menu offers the interesting feature of toggling transparency for the graphic elements that overlap the track on and off. The visuals are unlike everything seen before or since in the series, but nonetheless quite beautiful and detailed (vaguely reminiscent of the console fantasy JRPGs of the time), to the point that the Hebereke characters with their gaudy colors and simple shapes seem a bit out of place. But there still are zany elements such as the UFO and the lake monster with Hebe’s head in the background of the victory screen.

Hashire disregards the skills and abilities of the characters we learned in the first game, so it’s quite a surprise the first time one sees the slow and lumbering Jennifer becoming a tough opponent that is fast both on the road and in the water. The final showdown is against not one, but three Hebe doppelgangers, and the player must come in first each time to beat the game.

The many means to impair your opponents include such tools as a speed boosting strawberry, a star that makes meteors rain down from the sky and fire bombs. The other racers can also be turned into Popoons to slow them down or eggplants to stop them in their tracks completely for a short time. Contrary to Super Mario Kart, characters can hold several items at a time and cycle through them to use as desired. 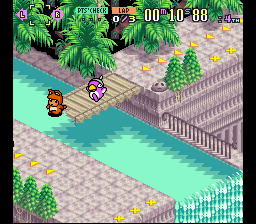 Despite the cutesy premise and pastel graphics, winning is not an easy task: the opponents are merciless, almost never make mistakes and often come out on top by using the items provided by squares on the ground. The player must learn strengths and weaknesses of the characters and the conformation of the various tracks (sometimes quite complex) to be victorious.

The only part that leaves room for failure are the bonus rounds where everyone runs in circles to escape a large rolling cannonball that flattens everyone in its way. If the normal races get too boring, there is also the option to play tag instead – the character who has to catch the others is marked by a huge turd(!) hovering above their head. A two-player splitscreen mode is also available.

The aural and visual quality of the game, combined with the high challenge level and responsive controls, make Hashire Hebereke an underrated racing title on the SNES and one of the most interesting titles in the series.