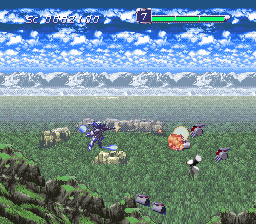 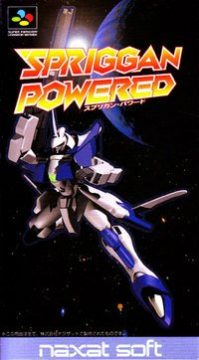 The third (and final) Spriggan game was released in 1996, in the twilight years of the Super Famicom. It was not developed by Compile, who had since moved on to (mostly) developing Puyo Puyo titles, but instead was done by Micronics, a company that was known for terrible arcade-to-NES conversions, though they also handled the SNES port of Raiden Trad. The only relation to the prior Spriggan games is that it’s a shoot-em-up featuring a mecha.

The world design has again completely changed, so rather than Mars you’re just flying over assorted planets and sci-fi scenery, and there’s no in-game story either. You do have a rival, which looks an awful lot like Zero from Mega Man X series, right down to the red color scheme and long blond hair. 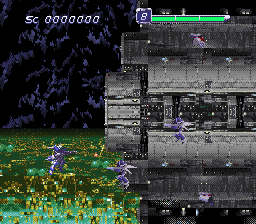 You do still change weapons via colored orbs, though. Your main weapon is a machine gun, which is strengthened by the orange orbs. The other three orbs de-emphasize the machine gun in favor of a secondary weapon. You also have an energy bar, which serves two functions: a power attack, which is executed by holding down the fire button and is determined by your weapon, and a shield, which will protect you from enemy fire but will drain your energy very quickly. You can also graze bullets for a “tech” bonus but this is rarely worth the danger.

The sprites are computer rendered, though they’re so small that it’s hard to make out any details; you can really only make them out during the intro. The levels are colorful, with some cool looking background effects, like the scrolling mountain terrain in the first stage, or the reflection of the shimmering sun over the ocean. The music is alright, but it uses the same kind of instrument set found in numerous generic SNES games, and it’s not a patch on Compile’s soundtracks.

There’s nothing particularly wrong with Spriggan Powered, but nothing remarkable either. It’s lacking both the aesthetic qualities and diverse weaponry of the Compile games, and the grazing mechanic is put to better use in later titles like Psyvariar.

Compile actually began development on an arcade game called Choujuuki Spriggan Powerd. Once again, other than being a side-scrolling shooter starring a mecha, it doesn’t seem to have anything in common with the SFC game. It has not been released publicly, and reportedly only has a single stage or two.