On January 14th 1990, Meldac/Live Planning, the company who published Mercenary Force for Game Boy and Zombie Nation for NES, released a Game Boy port of the arcade classic. It was quickly localized and released for North America in April 1990, marking the first time western gamers experienced Heiankyo Alien under its official moniker. Advertisements for the game tried to play on this, discussing how Americans will finally get to play the game that took Japan by storm ten years ago. 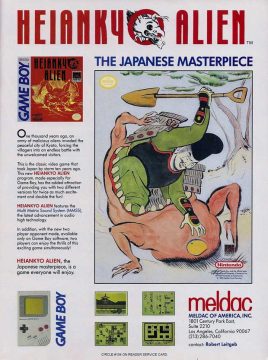 Unfortunately, the game received very little love from critics. Nintendo’s Game Boy Player’s Guide compares the game to Pac-Man, which the original Heiankyo Alien pre-dated by a year. The game receives one of the lowest scores in the entire guide book. Years later, Portable Review gave the game a 23/40 rating. Allgame.com’s review goes so far as to mock the box’s claim that the original is a “classic game” and states that “shooting aliens is a lot more fun than digging holes.”

If you’re looking for a game where you shoot aliens, feel free to check out the thousands of games dedicated to this topic, but this cartridge provides a unique experience that few other Game Boy games offer. While the mechanics are peculiar, it’s all too easy to write the game off as mediocre because it’s different.

Things start off pretty absurd at the title screen, where a spaceship lands, unloads some adorable aliens, and quickly flies away. The player is greeted with two menu options: new and old. The new game is a special update, with new graphics, sound, and gameplay elements, while the old game is a straightforward port of Tokyo Science Group’s hit.

The classic section looks and plays like the original, with one major exception: the Game Boy screen is too small to fit the full playing field. The maze is much smaller, making it slightly more difficult to arrange traps and avoid aliens. While the game designers tried to curb this problem by introducing fewer aliens per stage, it doesn’t help either that the digging speed is substantially slower than any of the other versions. Small qualms aside, it’s a decent enough port.

Thankfully, the new version is far superior. The play area is again smaller, yet there’s added variety to make up for it. Now, there are certain spaces that open and close at random, blocking off escape routes or alien attacks at different times. Another stage has a small boat at the top of the screen, allowing you to travel across the screen fairly fast.

The small play area is largely attributable to the large character sprites. The graphics are adorable, with the kebiishi and aliens given a chibi look. There are now two types of aliens: one that looks like the original games aliens and another that looks like a strange plant. The plants somehow have an even more erratic movement pattern than the other aliens, constantly changing direction at inopportune times.

To counter this, the digging speed is much faster. While the original had digging times of around four seconds, the new version allows the player to dig or fill in less than one and a half seconds. Equipped with a speed to take on eight aliens in a combined space, the game’s dynamic totally changes: rather than trying to trick aliens into holes within the time limit, the player has to focus much more effort on survival. The designers also took note of this change, ridding the game of the three minute time limit before aliens propagate the screen. Since the game now has an ending, the score becomes a secondary concern displayed only before each stage begins.

Gameplay becomes frantic fast, but after mastering the necessary techniques, the game is over far too soon. With only twelve stages, the game can be completed within twenty minutes. While this is status quo for many early Game Boy games, with Nemesis and Super Mario Land‘s average play times being less than half an hour, Heiankyo Alien ends abruptly right when it starts revving up the difficulty.

The good thing is that there’s more to the game than the paltry single player mode. The old game’s two-player mode allows for some fun cooperative play, elevating the lackluster port to some of the best multiplayer on the Game Boy. Both players fight competitively in the new arrangement by trying to capture enemies on their own separate stages. Every time an alien is captured by one player, the alien appears on the opponent’s screen. Once this rebound alien is buried, they are out of the game. This continues until someone dies or gets enough of a point lead.

In order to spice things up, the game will occasionally throw in some brief cutscenes. There are only two: one where the aliens and kebiishi are dancing about the screen and the ending, where the citizens of Heiankyo walk the streets peacefully. Not exactly revolutionary cinematics, but they do help break up the monotony and add to the game’s oddball flavor.

In addition to the improved graphics and gameplay, this marks the first time an actual soundtrack is featured in Heiankyo Alien. Composed by Nakagata Norio, who did soundtrack work for games including Burai Fighter, Low G Man, and Zombie Nation, the few songs here are bouncy and light if a little average.