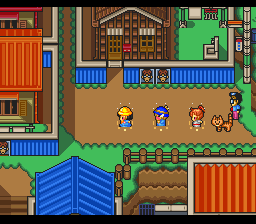 Gokinjo Boukentai (“Neighborhood Adventure Troop”) is one of the many Super Famicom RPGs which never made it out of Japan. It was also brought out by an obscure publisher, making it largely unknown in the West. However, it has a small following in its country of origin, thanks to the character designs provided by Masumi Sudou (須藤 真澄). She is especially famous for her cute manga stories which deal with everyday stories of cats or fairytale-ish settings. Gokinjo Boukentai has a present-day setting and is thus often compared to Mother 2 / Earthbound. Getting a fairly small release by Pioneer DLC back in the late 16-bit days, the game is one of the very few RPGs which actually fetches high prices on the Japanese retro game market.

The game tells the story of a young kindergartner named Mana, who recently moved into a stereotypical small Japanese town with her family. She is known among the adults for acting a little weird and randomly walking off to strange places, but this is actually connected to a special gift she possesses. Mana is able to see and interact with the youkai (Japanese gods and demons), which are invisible to other people. Mana gets called upon by “God” to help him fight the evil youkai in the town, who have been the source of numerous problems. Not all youkai are bad natured though, and some will help Mana along her way. Her sidekick Yuzu the cat will join and leave her party from time to time on its own accord, and acts as a narrator between each chapter, which consists of one weekend day. Other friends will eventually join Mana, and a hidden cave next to her family’s house acts as a base to exchange the characters of your party.

At its core, the game is a very traditional RPG. Like in Earthbound, enemies are visible on the map and can often be avoided. But once they are touched, a battle starts in a traditional first person perspective for some turn-based fighting. The normal battles are all fairly easy and short, and seem to exist to experience the goofy enemies, but boss fights require a little more strategy. However, if a battle is lost, there is no Game Over. Instead the player can choose to enhance one battle-related stat and try again, which makes the game very beginner friendly, though it becomes too easy for experts. Putting the nonexistent Game Overs aside, the fighting pretty much feels like your standard Dragon Quest clone. From time to time, dungeons will feature small puzzles, and while they’re nothing to write home about, they manage to throw some diversity into the mix.

Some features still manage to make the gameplay somewhat unique though. First, there are no magic points, and special attacks instead cost your character’s hit points. After each battle, all HP will be refilled, and the party will always start each fight with full health. Second, some characters have special abilities on the maps, similar to Breath of Fire. Two examples would be the ability to run and the ability to use a grappling hook. Third, the leveling of this game is pretty special. Battles will only provide items to the party, which can be traded for money and items with the townsfolk, but no experience points nor levels are present. Instead, after each chapter the player can choose which kindergarten classes Mana and her friends will take to increase their stats. This affects not only the fights but also the learning of special attacks, as well as the direction the plot takes. Depending on Mana’s stats, the available party members can change, and other daily missions will become available.

The chapters are arranged like a typical 90s anime with self-contained episodes, as the player receives some objective for the day. Once the quest is finished or the baddie of the day is defeated, Mana’s angry mother will come and drag the kids home, come hell or high water. This leads to some goofy situations – if the last fight happens in the sky, she will ride around in an airjet, while water won’t stop her and her power boat. She might simply break through the wall of the building you’re in. Nothing stops a concerned mum!

Presentation-wise, the game is a mixed bag. On the one hand, the graphics are really colorful and cute, and the environment is full of nice details. For example, you will find every usual detail in the convenience store of the town, there are huge amounts of buildings in the town and every place and character seems somewhat unique. On the other hand, the programming feels uneven. If you use special abilities of your characters or there are many NPCs on the map, the game slows down. The music is memorable and features a lot of sweet and characteristic compositions, which seem to come straight out of a 90s anime.

Gokinjo Boukentai is, putting some technical shortcomings aside, everything you would consider to be a hidden gem. It’s beautifully depicted, full of quirky humor and interesting game mechanics. The unique setting and the ever-changing town full of interesting characters and small details will ensure the player is drawn into the game world until the credits roll, and the different story branches give enough reason to play through the game more than just once. This is accompanied with mode similar to New Game+ called V-MAX Mode, which unlocks after the first clear. It shows the player which episodes of the story already have been viewed and cleared so far.

The language barrier is quite high, and players without knowledge of Japanese will probably fail to progress without a guide. There is no fan translation released or in the work at the moment, though hopefully it will be picked up by someone so it can be accessible for a wider audience someday.

As far as supplementary materials, there is a one-shot manga based on Gokinjo Boukentai released by Banboo Comics alongside with the release of the game, written and drawn by the original character designer Masumi Sudou.