Nonograms, also known as Picross, Oekaki Logic, Griddlers and a slew of other names, are a kind of puzzle where you fill in the cells of a grid to complete a hidden picture. They were invented in Japan at the end of the Eighties, and in the Nineties they became something of a fad even outside puzzle magazines. Nintendo brought them on their systems with a few titles for Game Boy and SNES, but only one of them was released in the West under the name Mario’s Picross. The others were never translated because nobody in the USA and Europe really cared much about it despite Nintendo’s many ads at the time. 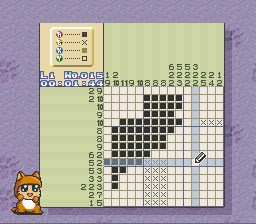 Sunsoft also followed the fad and produced this Hebereke-themed nonogram game for a few systems: SNES, PlayStation, Saturn and even Bandai’s Wonderswan. This time however, as the title says, the protagonist is O-Chan rather than Hebe. As the intro for the Saturn version’s story mode shows (the SNES one has abolutely nothing in the way of plot), the latter has been kidnapped by Utsu. As usual for the series, she needs to travel around the world and defeat everyone in her path. This time this is of course achieved by solving a ton of nonograms.

Another case of a puzzle game with the Hebereke characters slapped on, which nonetheless gained two PlayStation-exclusive sequels. The latter one was released in 2001 as a part of the “Value 1500” budget games.