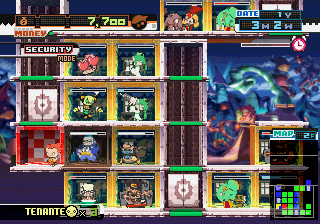 After the PlayStation 2 reached the world in 2000, the library of the original PlayStation began to fill with shovelware, but also some quirky Japanese niche titles with lower development costs that wouldn’t fare well on Sony’s newest system. One Piece Mansion falls into the latter category. Unrelated to the best-selling manga about pirates, One Piece Mansion puts you in the role of a child landlord named Polpo. In the story mode, his little sister is kidnapped by a rival mansion owner named Chocola. Polpo must go through seven missions in order to get his little sister back. It’s a short story mode, but it does a good job of teaching the player how to play the game. Strangely enough, this game was directed by Hideaki Itsuno, who is best known for directing and planning various Capcom fighting games, as well as the majority of the Devil May Cry series. But with One Piece Mansion Itsuno shows that his directing skills can be applied to an entirely different genre.

As Polpo, you have to manage the tenants of your mansion. The establishment in question is made up of several room-sized square blocks, with each housing one or two residents. More tenants means more money, which enables to house more tenants, as well as elevators wherein those tenants make more money. Blocks of tenants can be switched for fifty credits, new tenants added for three hundred credits, and elevators added for five hundred credits. Polpo can also switch his own block with a tenant’s block.

Tenants affect the mood around each other, as they give off stress (shown as red arrows) and happiness (green arrows) in up to eight cardinal directions. The chibi-style folks all have individual personalities that affect their surroundings in different ways. For instance, there’s Ai-Chan, the young girl who gives love in all eight directions; Rounin, the studious blob thing who does not give off anything; Garuchanko, a sumo-wrestler who is constantly training and gives stress in four directions; and many others.

If a tenant starts getting stressed out, the amount of happiness they give off weakens and the amount of stress increases. Some tenants who usually give off happiness in certain directions start giving stress in possibly more directions when they are stressed. The same happens vice-versa. If a tenant gets too stressed out, their apartment explodes and that space is vacated. 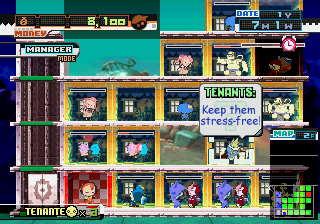 Another element impeding progress is the Syndicate Five. These are five different criminals who set up their own rooms, preventing players from putting a tenant in that space. Additionally, they will occasionally walk out of rooms and cause trouble wherever they go. Polpo must go up to them and blow his whistle to make them go back to their room. This is where elevators come in handy, as Polpo must have a way to reach them if they are on a different floor. This is also where the stress-giving residents come in handy. The Syndicate Five also have stress/happiness meters, and by getting them stressed out, they can be made to explode like the other residents. So whenever one shows up, it is important to put off a whole bunch of stress-giving residents around them. Polpo can also move his room closer to them so it’s easier to catch them when they go off to cause trouble.

Additionally, fires may break out occasionally, which spread out to neighboring rooms. Polpo must leave his room and blow them out with a fire extinguisher in order to stop them, as fires can also cause tenants’ rooms to explode. Every now and then a boss appears, and the player must drive them out like the Syndicate Five.

Graphically, the game is certainly amusing to look at. Each resident has their own little set of animations, from practicing martial arts to sleeping to dancing and playing around to being startled by another resident. These animations fill the characters with life and personality, and make them very interesting to watch as a result. The experimental soundtrack makes use of a lot of synth elements with brasses and chimes, almost a synth fusion if that genre ever existed, and it really fits the mood and art style of the game. The sound effects also do a good job of making a really quirky cartoony atmosphere. 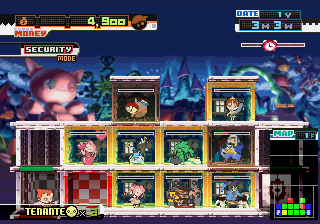 Between trying to keep residents happy, making sure the Syndicate Five doesn’t meddle too much, and preventing the occasional fire from breaking out, One Piece Mansion can be an incredibly hectic game. However, with enough time and practice, anyone can become skilled at managing the mansion. The endless mode in particular challenges you to come up with new and possibly better resident combinations. If there are any flaws with the game, it’s the short story mode and the lack of a multiplayer mode. Having at least one of those would make the game a lot more enduring. But for what it is, One Piece Mansion is a hidden PlayStation gem.