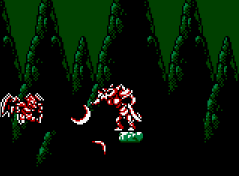 In 1990, Capcom decided to give the lovable red gargoyle character who killed us so many times his own game. Red Arremer is a side-story to the regular series, hence the “Gaiden” adjunct. In the West aptly named Gargoyle’s Quest (the hero is also called Firebrand), it is a major departure from the Ghosts n’ Goblins games in many ways. Foremost is the game’s structure. There’s a lot more depth than the simplistic platforming nature of its host series. RPG-like exploration and leveling elements have been mixed in, and the level design resembles a mix of Ninja Gaiden and Mega Man more than Ghosts n’ Goblins.

The story of Gargoyle’s Quest revolves around a war between the Ghoul realm and a similar realm from an alternate universe, from which an army called the “Destroyers” is threatening to wipe out the inhabitants of Firebrand’s homeworld. Thus, Firebrand is chosen to enter the alternate universe and take down the Destroyers’ leader, King Breager. To do this, however, he will need to acquire artifacts that will give him the ability to overcome various obstacles. Obtaining these artifacts usually involves helping one of the leaders of the realm and going on various fetch quests. 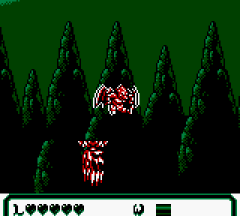 From the outset of his adventure, Firebrand has very limited abilities. He can shoot one weak, slow-moving projectile at a time, jump only a few feet off the ground, and fly for a very short duration. However, as he goes on the aforementioned fetch quests and acquires artifacts, he will gain more powerful attacks and be able to jump higher, fly longer, and also gain more health. This is similar to the overall structure of Metroid, but Gargoyle’s Quest has a particular vice that Metroid lacks; it’s linear. You’re not given the freedom to search around the demon realm looking for the next artifact yourself. You’re always told exactly where to go and you can’t progress any further until you find what you’re looking for. Fortunately, the design of the stages and overall structure of the game keeps this from being a crippling flaw.

The platforming stages are all bound together by an overworld map. Oddly enough, like an RPG, you get into random battles here as well. They play out similarly to the battles in Zelda II, where you appear in a small stage, facing a group of enemies. Random battles happen somewhat regularly and are a bit annoying because they’re just a waste of time. You don’t gain EXP in this game; your only reward for the random battles are vials, which are essentially the currency of the Ghoul Realm, and these are found in great abundance in the platforming stages. Plus, the only thing you can buy with them are extra lives. 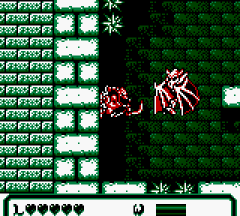 The biggest flaw, however, is the game’s difficulty. It’s severely unbalanced. On the one hand, you have the platforming. Like many games of its day, some of the platforming segments just weren’t thought out all that well, with really badly placed enemies and very unreasonable jumps to make. Often, you’ll be presented with the choice of either taking a hit from an enemy or falling into a bed of spikes/lava and dying. While the enemy placement isn’t nearly as evil-spirited as in the original NES Ninja Gaiden, it can still get pretty annoying. On the other hand, you have the boss fights, which are a joke. They often amount to little more than a shoot out. Simply plug your enemy with as many shots as fast as you can and they’ll go down. No analyzing patterns, no finding weak points.

Visually, the game looks about on par with most other Game Boy games. There’s some nice details in the backgrounds that sell the atmosphere well. Conversely, the music is pretty standout. As per usual for Capcom, it’s a really catchy, but surprisingly dramatic soundtrack when it needs to be. 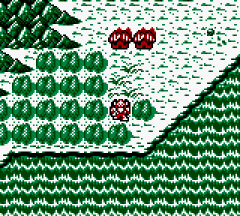 All this summed up makes Gargoyle’s Quest a pretty enjoyable game that’s deeper than your standard handheld fare of the day. Sadly, it’s extremely short, but is still satisfying enough to feel complete. A very welcome departure for the franchise.