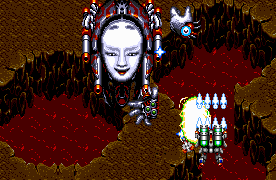 Aleste 2 and Aleste Gaiden were relegated to the MSX2, but Compile returned the series to consoles with MUSHA for the Mega Drive. In Japan, the game is called Musha Aleste, “musha“ meaning “warrior“, with a connotation of feudal Japan. In America, it drops the Aleste name and turns “musha“ into an acronym meaning “Metallic Uniframe Super Hybrid Armor“, which is a sort of clever way to keep a connection between the titles while giving a more culturally appropriate meaning. The game was published by Toaplan in Japan, and Seismic in North America.

MUSHA continues with the Japanese-influenced setting of Aleste Gaiden, though rather than  controlling a character in a cybernetic suit, the hero pilots a flying mecha. The Japanese version uses the subtitle Full Metal Fighter Ellinor, a reference to the heroine. Ellinor is the closest thing that the Aleste series has to a recurring protagonist, but since the game takes place in a different continuity than Aleste 2, they are not technically the same character. The game doesn’t clarify if she’s the daughter of Aleste Gaiden‘s Ray, as she was back in Aleste 2. In the English version, the heroine is renamed Terri.

The plots are slightly different between each territory – the Japanese version takes place in an alternate Tenryaku 91 (which would be something along the line of year 1038) while the American version takes place in 2290. There are assorted other references to Japanese history and terminology which were changed in location, but the gist is the same – a supercomputer named Dire 51 (the same as the original Aleste, “dia“ and “dire“ are spelled the same in Japanese) has gone rogue and attacked earth, leaving a squadron of humans to launch a counterattack. Both the introduction cinema and the first few seconds of gameplay show that this strike goes awry, leaving Ellinor/Terri as the sole member of the squad to complete the mission.

The gameplay is similar to Aleste, though adapted to the Japanese setting. Your main weapon consists of laser-like shurikens, and rather than grabbing “P“ chips, it’s powered up by icons with the kanji “chikara“ (“power“), much like Aleste Gaiden. However, there are only three secondary weapons – bombs, lasers, and rotating orbs. Building off of Blazing Lazers, these weapons are unlimited, though they are still powered up by obtaining more orbs of the same color.

You have control over two small Options called Arms, which provide supplementary fire. By default they just hover next to your mecha, but you can change their behavior by pressing the C button, either fixing their aim, commanding them to rotate around your ship, or automatically fly around the screen and attack enemies. Their attacks are rather weak though, so it’s of limited use.

One of the major issues of most Compile shooters is that they tend to be too long, often clocking at around an hour. MUSHA is much faster paced, with a full run taking about 35 minutes. It’s also a little bit easier – you lose a weapon level when getting hit, and are only destroyed when you’re at the lowest level. It makes up for the fact that your mecha is a slightly larger target than previous Aleste spaceships.

While it builds on the solid core of previous Compile shooters, MUSHA‘s strength really lies in its setting. Many of the enemies are futuristic interpretations of various elements of Japanese lore. The first level boss is a gigantic mobile pagoda, mounted on tank treads and armed with turrets. Once you disarm its exterior, the second stage is set inside, as you fight through the clockwork machinations that cause this anachronism to function. One of the midbosses is a spacecraft with a Noh mask mounted on its front. A recurring foe, a robot in samurai gear, also makes several appearances throughout the game, even making one final assault after escaping from the final fortress.

One stage in particular has a cool graphical trick. After you beat a midboss, the tiles underneath its feet drop away, revealing a sprawling chasm, with an illusion of depth thanks to parallax scrolling. Enemies continue to rush up at you from the depths below. It might seem simple nowadays, but for an early 16-bit shooter, this looks absolutely incredible.

The soundtrack is also brilliant. Provided by Toshiaki Sakoda, who had previously supplied the score to Compile’s Devil’s Crush pinball game, it’s a similarly styled hard rocking heavy metal score. The intro is an arrangement of the classic Aleste / Power Strike title screen theme, and every track during gameplay provides intensity even in the few moments where the game’s pace slows down. Even the ending is a stirring power ballad. The FM synth of the Genesis is harsh but its rendition of shredding electrical guitars is masterful, with only Technosoft’s Thunder Force IV matching it for sheer rocking out quality.

While the lack of weapons is slightly disappointing, ultimately it doesn’t matter. MUSHA looks and sounds amazing, which, combined with its blazing fast pace, makes for one of the best shooters of the 16-bit era.