Thanks to the success of Zanac and Aleste, Compile found themselves as one of the “go to” development houses for quality shoot-em-ups. In addition to the two Xevious spinoffs for the Famicom and MSX, they were also contracted by Hudson to create a new game for their yearly Caravan game contest. At this point in 1989, their previous titles had been the shoot-em-ups Star Force, Star Soldier, and Starship Hector, a switch over to baseball with Power League, and then back to shooters. This entry was Gunhed (Gun Unit / Heavy Elimination Device), also known as Blazing Lazers in the United States. 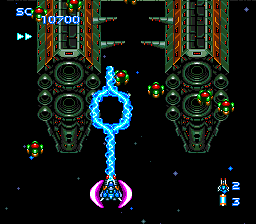 Though visually distinct from the Zanac and Aleste games, Blazing Lazers is unmistakably a Compile title. However, the standard eight weapons have been condensed down to four, each indicated with a Roman numeral. The standard “I” weapon is much like the default Star Soldier gun, and subsequent upgrades fire at many angles. “II” fires wide energy waves while “IV” adds orbs that rotate around your ship, much like in Aleste. But the coolest weapon is “III”, dubbed Field Thunder. At the default level it’s a standard forward firing laser, but when powered up it fires several blazing lazer trails that crawl hypnotically around the screen. It’s the sort of effect that showed why the TurboGrafx-16 was a much more powerful machine than the NES. Weapons are now unlimited and powered by repeatedly picking up the same number, but your current weapon can also be strengthened by grabbing purple orbs. You can also drop bombs, which are in limited quantities, as well as adjust your speed with the Select button.

There’s also an unusual checkpoint system. Typically if you get destroyed, you need to start at an earlier point in the stage. That is, unless you grab flashing orbs, which tend to only pop up if you shoot another power-up several times, or if they float to the bottom of the screen. If you grab one of these, then you’ll automatically resurrect where you left off when you die. The game doesn’t indicate how many of these you have though, so at a glance you can never be sure if you’ll get kicked back when dying.

There are also secondary power-ups. These include an item that fully powers your main weapon, though ironically in some cases these end up being worse than their standard form. For example, the Field Thunder weapon only fires out one homing beam instead of multiple lasers. The rest are standard for shoot-em-ups – a shield, missiles, and Options.

The levels feature a variety of themes, with many taking place in standard outer space levels, but a few are more varied, like an Egyptian stage (where the numerous pyramids fire missiles out their tops), a biologically themed stage (with attacking brain-things), and a level full of bubbles, which is reminiscent of a level in Gradius III despite being released in the same year. Most of the bosses are not particularly memorable, except for one enemy shaped like a human skull. While outwardly similar to a boss in Konami’s Salamander / Life Force, it’s substantially more gruesome, as once you blow off its face, you continue to fight against its pulsating brain. The final boss is, weirdly enough, a woman in a fancy dress who tosses missiles.

While the game looks fantastic, the music isn’t quite up to par. Despite being composed by Compile mainstay Masatomo Miyamoto, the melodies aren’t all that memorable, and the TurboGrafx-16 synth sounds rather abrasive.

Blazing Lazers is an important game because it defined an entire generation of shoot-em-ups. While this was the only game that Compile developed for Hudson, they continued to create similar games across the other 16-bit platforms. Meanwhile, Hudson’s subsequent shooters were all based on the template set out by Blazing Lazers, along with other similar games like Naxat’s Nexzr and Asmik’s Verytex. 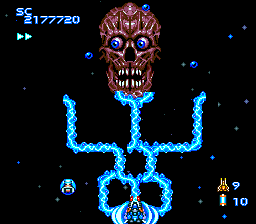 Even though Blazing Lazers was created to be a part of Hudson’s Caravan series, the retail release doesn’t contain any of the necessary score attack modes. Instead, these were relegated to a separate release, Gunhed Taikai. Since the distribution of these was extremely small, they are very expensive collector’s items. The subsequent Caravan games included the extra modes on the regular release.

Despite being mostly developed by Compile, the game credits Hudson’s Tadayuki Kawada as a game designer. He was previously on the “meijins”  who toured with shooter expert Takahashi Meijin, and was the basis for the character Kawada Chuu in the Bugtte Honey anime. He was later credited as the designer for some of the later TurboGrafx-16 Star Soldier games. 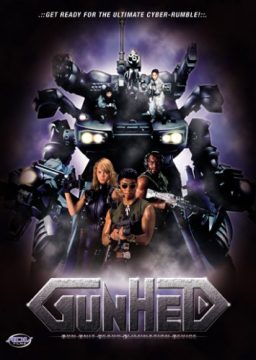 In Japan, the game is a tie-in with the live-action mecha movie Gunhed, which is Japanese produced despite using a largely English speaking cast. How are the two related? Well, they really aren’t. Other than featuring the Gunhed mecha on the title screen, and featuring a transforming ship in the intro, there are absolutely no other connections. In fact, the mecha doesn’t even appear anywhere in the game. 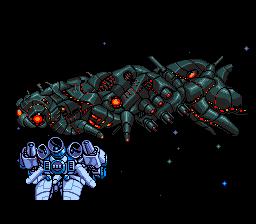 Due to the license, when it came to the Virtual Console releases, Hudson opted to release Blazing Lazers in Japan rather than the original Japanese version.