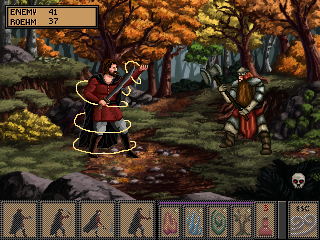 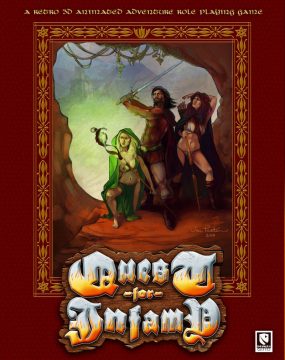 Quest for Infamy began life as a Quest for Glory-inspired fan game, and booting it up feels like a trip back to the ‘90s – aside from the fact that this time around, you’re playing as a magnificent bastard rather than a righteous do-gooder trying to be a hero.

Starring a rascal named Roehm who finds himself stranded in the valley of Krasna after a romantic dalliance goes horribly wrong, Quest for Infamy’s story is a quest involving cultists, a cursed artifact known as the Eye of Jaagar, a corrupt town sheriff and plenty of opportunities for Roehm to save the day while making dirty jokes along the way. Produced by the indie dev group Infamous Quests, Quest for Infamy was spearheaded by Steven Alexander and Shawn Mills, who were regulars in the mid-2000s on the forums of Tierra, a fan game group now known as AGD Interactive. 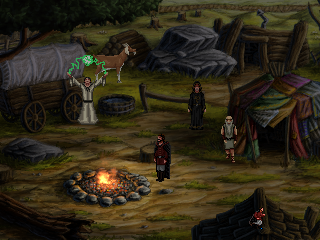 Tierra, which had produced high quality remakes of King’s Quest I and II, attracted fans who believed they could take it upon themselves to design adventures in the same spirit as Sierra’s oldies. Mills and Alexander banded together with like-minded souls to remake Space Quest II and King’s Quest III, but bubbling in the back of their minds was the idea to design a game similar to Quest for Glory from the unique perspective of a “bad guy.”

“One of the first things we realized is that evil and being a ‘bad guy’ are different things,” Mills said in an interview. “Evil is by definition insanity. If we just allowed the player character to walk into a village and kill all the people, well…you can’t tell much of a story from that point. So the first real move we made story-wise was to make Roehm a rogue who’s out for himself, rather than someone who was completely evil.” 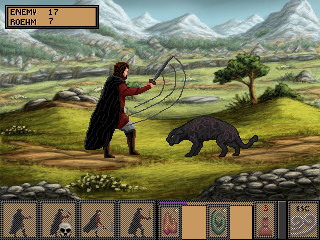 Alexander echoed this, stressing that Roehm evolved from full-on villain to an anti-hero in the same vein as Han Solo: “Someone who is not a goody two shoes hero type, someone who is often on the wrong side of the law…but at heart is not a person of evil intent. Mostly just out for themselves.”

Once Roehm was established, the Quest for Infamy team still had a game to make. Alexander and Mills designed the majority of the project before recruiting a small crew of artists, animators and musicians, some of whom had worked on Tierra’s games. After a successful Kickstarter in 2012 and two years of production, Quest for Infamy was finally released in July 2014, making it one of a select few Quest for Glory-inspired fan projects born in the 2000s that successfully made it from the conceptualization and development phases to finished product. (The other two are AGD Interactive’s remake of Quest for Glory II and Crystal Shard’s Heroine’s Quest: The Herald of Ragnarok.)

“A lot of those projects failed because they were too ‘team’ driven and didn’t have a single person – or in our case, two people – pushing the vision,” Mills said. “I say this not to denigrate any of those teams, but when you’ve got a group of a dozen or more talented and creative people all trying to write a game, it’s going to have conflict that results in stagnation. A single vision needs to win the day. With Steve and myself, we talked about and wrote the game pretty much in its entirety before we approached the rest of the team.”

“Shawn and I were the executive producers, directors and writers on the project,” Alexander added. “We’d work with the rest of the team and often get ideas and such, but in the end, the buck stopped with us. Plus, we’re tenacious – that was always our motto, even when working on remakes – ‘JUST FINISH IT.’ It didn’t matter how long, the goal was always to finish.” 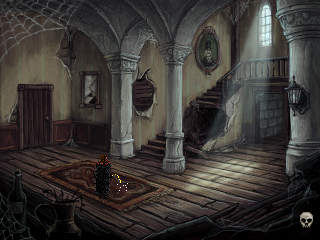 But Quest for Infamy goes farther than merely mimicking its inspiration. It arguably exceeds most of the Quest for Glory games in offering an absolutely giant world to explore, to the point where both Alexander and Mills jokingly call the project “basically one big scope creep.” All of this is evident in the game’s myriad environments – Roehm stomps through not only multiple types of forests (riverside, autumnal, dark and spooky, enchanted) but also farmlands, a quaint town, a Mediterranean-flavored city, a swamp, a graveyard, a grassland, cultist ruins and a huge maze-like mine reminiscent of something out of a dungeon crawler.

Aside from upping the size ante, the game’s three character classes – the Brigand, Sorcerer and Rogue – also offer a twist on Quest for Glory’s Fighter/Magic User/Thief combo. Instead of choosing your class in the beginning, you specialize by apprenticing yourself to a mentor. These mentors provide unique missions as the game goes on – for instance, the Sorcerer’s teacher, a Doctor Strange-looking fellow named Prospero, tasks you with collecting the reagents needed to cast spells, while the Brigand’s buds ask you to partake in a caravan heist and the Rogue’s “colleagues” ask him to, well, steal stuff. This natural method of class progression and quest-giving feels like a decidedly modern evolution of Quest for Glory’s mechanics, and it also presents Roehm as less of a blank slate and more like the ever-adaptable scoundrel that he is.

Quest for Infamy does have rough spots here and there, including crude humor that won’t be everyone’s cup of tea, a smattering of the usual obscure adventure game puzzles and occasionally juvenile voice acting (aside from the expertly-voiced narrator, who brightly shines right alongside Quest for Glory IV’s John Rhys-Davies). Nevertheless, the dedication of Infamous Quests to bring every section of Krasna to life shines through, and Quest for Infamy was honored with four Adventure Game Studio awards in 2014, including a Best Character award for Roehm. 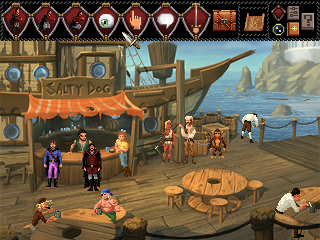 Despite these accolades, sales didn’t quite make up for the huge amount of work required to create the game. As a result,Quest for Infamy 2’s future remains up in the air, though the game’s ending does hint at a sequel, with Roehm venturing into the wider kingdom of Lonaria. At the moment, Infamous Quests is still finishing up smaller projects, including a King’s Quest-inspired duology entitled Order of the Thorne and a short Quest for Infamy prequel, Roehm to Ruin, which tells of Roehm’s ill-fated affair with a baron’s daughter that led him to the valley of Krasna. All three games were successfully Kickstarted in 2015.

“Trying to produce it on a financially feasible budget is difficult,” Alexander said of a potential sequel that would match the size and scope of Quest for Infamy. “But I never want to say never…We have a couple of games to finish working on, and while we don’t have firm plans to make Quest for Infamy 2 at this stage, we do have the story written,” Mills added. “Quest for Infamy is one of the greatest things I’ve done in my life, so I’d love to go back to that well again!”