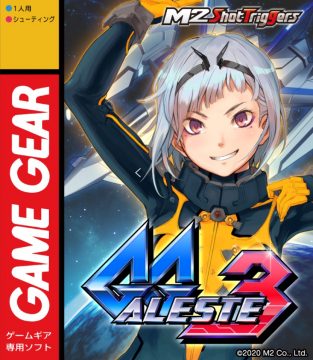 The story focused on pilot Luna Waizen, who must fight back against cyber terrorists that have hijacked Earth’s satellites. The game plays pretty much as the previous GG Aleste games did from twenty years prior, offering a main weapon (powered up by P chips) and one of six sub-weapons, each powered up individually. The bombs from GG Aleste 2 are gone, instead replaced with a shield which will absorb a single hit and is activated when collecting 20 P chips. It’s not exactly an exciting system but it is quite handy.

The most impressive aspect of GG Aleste 3 is that it’s not just developed in the style of 8-bit Sega games but is actually programmed for Game Gear hardware specifications. There are plenty of small touches and impressive visual effects, like the way that the birds fly beneath your ship at the beginning of the second stage, or the missile that rotates beneath you on the fifth stage. The boss fights are similarly impressive – the second level is a satellite colony (similar to the first GG Aleste), which is suddenly cut to pieces by a giant robot with two enormous blades. The third level boss is an enormous crab, which blows our bubbles that won’t kill you, but will temporarily slow down your movement, while the fourth level is a submarine shaped like a manta ray that fires targeted missiles. The final area has cruisers with sleek jet black coloring and bright ruby crystals – it’s quite striking. There is quite a bit of slowdown, but the game seems designed to take this into account, as it helps to weave through some of the bullet patterns; this can be disabled in the Aleste Collection‘s emulator but it makes the game substantially more difficult! Many of these things are typical of 16-bit games and other early/mid-90s arcade shooters, but they look spectacular considering the limited 8-bit hardware. The soundtrack is a bit noisy, but the second level arrangement of the classic Aleste main theme is quite good.

The only potential issue with GG Aleste 3 is an existential one – why the Game Gear? The system has a fairly small resolution (160×144), which means that the playing field is more zoomed in and slightly more square-sized than would be found on the Master System (256×192) or Genesis (320×224). As with the GG Aleste games before it, the sprites are appropriately sized so it never feels too cramped, but it’s kind of a weird choice, especially considering that the glory days of the Aleste series is generally regarded to be the 16-bit era. Perhaps M2 wanted something to use in Sega’s Game Gear Micro console – all three GG Aleste games plus the SMS game are included in it – or perhaps Japan simply has more nostalgia for the look and feel of the Game Gear versus the SMS/Mark III.

Ultimately GG Aleste 3 isn’t pushing any boundaries, but it’s still an outstanding 8-bit shooter, one that looks and sounds great, and benefits from a skilled development team, both programming and design-wise.