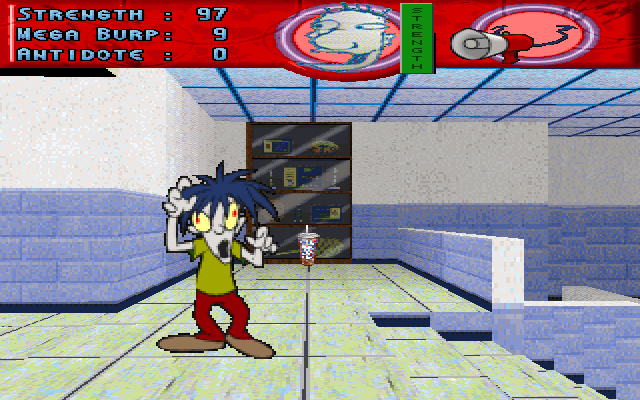 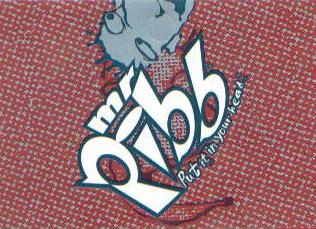 For as long as video games have existed, there have been games based on the food and drink you’ve probably ingested several hundred times in your life. They were especially popular in the mid-’90s or so, with the emergence of Spot, the mascot for 7-Up who ended up getting quite a few of his own games. Some of these games were actually pretty fun, like Treasure’s early effort, McDonald’s Treasure Land Adventure. Some, well… weren’t. Mr. Pibb, for those of you who haven’t had it, is more or less Dr. Pepper. To get to the point, however, the developers decided to take the license and turn it into an FPS. While this sounds like a weird idea, Chex Quest ended up so… well, not terrible that there was a chance this would end up being the same. Sadly, it was not to be.

All the plot is given to you at the start of a program, where a mad scientist has turned all the students and staff of your high school into evil zombies. Somehow, the cure to zombification is to burp at the zombies until they’re transformed back into human beings. The object of the game is to find a way to get to the mad scientist holed up under the school and defeat him to return everything to normal. You burp at him, too. The whole ‘shoot aliens with energy weapons to return them to their home dimension’ idea from Chex Quest was silly, but at least it made some sort of SENSE.

The first thing you’ll notice once the game starts is the large, poorly drawn logo for Mr. Pibb hanging near your health bar. It actually looks like something that came out of Sweet Bro & Hella Jeff, so feel free to scream out ‘IT KEEPS HAPPENING’ any time you end up being frustrated in the game. Which you very much WILL. It’s not actually clear if you’re actually playing as the head of “Mr. Pibb”, but the idea of a giant, disembodied head burping at things is too hilarious to not assume so.

The game runs on an engine apparently known as ACKNEX, going by what it says when you boot the game. It’s somewhere between Doom and Quake in tech. On one hand, there’s water you can swim in and bridges overlooking rooms, but everything’s made of sprites. A couple of years before the release of Quake 2, it might have looked somewhat impressive, but in 1998, it just looks amateurish. There’s only one extra-large level set in a high school, where you search for the keys and items you need to reach the final boss. The game does at least try to look like a school with its limited engine, so there’s actual classrooms you can enter with blackboards and desks, as well as a cafeteria and gym. The problem is that all the geometry still ends up looking the same, although at least you get an auto-map.

The problem with the game that every single part of it ends up being either unintentionally hilarious, terrible, or some combination of both. There are only two enemy types not counting the ‘boss’ at the end of the game, and one is just a recolor that takes more hits to transform. All the zombies do is slowly shuffle towards you and very, very slowly drain your health by about 1 point per two seconds. While they’re easy to defeat, the problem is once they turn back into ‘regular’ people, they’ll stand exactly where you transformed them. Hitting them will cause them to bitch at you and take away some of your health, which is really a pain when there’s enemies standing between them. 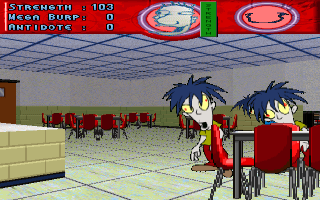 There are three weapons you can use against the zombies. Your standard burp fires so fast and does so much damage there’s barely any reason to use much else, but you can also collect megaphones for ‘Mega Burps’, as well as a straw that lets you spit anti-zombie antidote. And of course, there’s giant cups of Mr. Pibb laying all over the school to restore your health, and with how common they are and how little damage enemies actually do, you really have to be almost actively trying to dip below 100 health. Aside from weapons and health, you also have to collect items to bypass certain obstacles. The problem is that both the items are hidden in such obscure places that you’ll have to scour the level several times over in order to actually FIND them.

While the 3D is decent, decent enough that it supports both being able to swim through water and room over room, the sprites are hideous. They look like something that would come off of a Geocities page, and they all animate about as well. The school also apparently only has two students and two teachers, and then clone them all dozens of times.

The sound is even worse, especially since Mr. Pibb comments on everything you do in a very loud, annoying voice. Every time you pick up health, you get “PUT IT IN YOUR HEAD!” screamed at you, and “NAH-AHHHHH!” every time you walk into a locked door. The sound also has the tendency to double over itself, which can get very painful if you have your volume up too high. The only music is a very loud, repetitve song that starts as soon as the program loads and loops on end forever.

Basically, Mr. Pibb’s game is confusing, annoying, and dated, much like its own mascot. It’s not much fun to play, and if the music doesn’t break your ears, the voice clips will end up doing so. There’s pretty much no variety in anything, even considering the game is only one level long, and the only possible challenge is getting hopelessly lost. Whatever you do, stay far away and play Chex Quest instead.