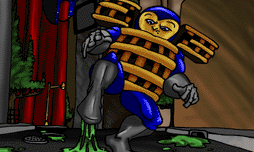 If this game looks suspiciously like Doom, it’s because it is. Chex Quest is for all intents and purposes a promotional total conversion of the classic FPS title. Many of the head members of Digital Café, the media company hired by Ralstons and WatersMolitor to develop the game, were fans and modders of levels of Doom, making this their first professional breakout for the lead artist Charles Jacobi and programmer Scott Holman. 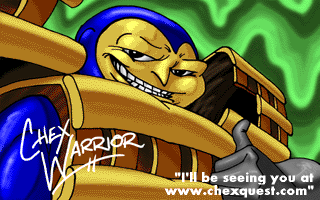 The simple 90s CGI full-motion video intro on the CD starts us at an emergency meeting of the Intergalactic Federation of Cereals about the impending danger from a cataclysmic volcanic blast on a mining planet of Bazoik. The explosion ruptured the fabric of dimensions and causing a legion of slimy creatures known as Flemoids to disperse and feast on nutritious food products, causing them to grow in size and throw the balance of breakfast and peace out of whack. The only way to stop them is to utilize “zorchers” to send those gooey monstrosities back to where they came from before they take over and slime the galaxy. Only one crunchy armored warrior is up to this challenge: Fred Chexter, leader of the Chex Squadron, whom the player controls. The Flemoids themselves look as you’d expect a race of snotty cartoonish alien baddies to look: nothing but googly eyes and a pile of Nickelodeon green gak slime. Their method of their attack is to cover you in enough of their gunk to trap you in place– but no kill you, because that’s not kid-friendly. Likewise, your weapons of choice can merely “zorch” them until they teleport back to their original dimension. If these Flemoids could bleed, you’ll never know, as no trace of them is left, not even a booger puddle, as they disappear.

The Flemoid enemies are almost the same as the low level threats in the first stages of Doom with minor tweaks to their coding. The Flemoidus Commonus and Bipedicus are the Fallen Trooper and Shotgun Guy mobs respectively but without hitscan attacks from afar, making them only capable of close-combat melee damage to the player. Likewise the Flembrane boss of the game is merely a Baron of Hell much like the two fought at the end of Knee-Deep in the Dead episode, with the green wall monster lacking any movement capabilities. The other two slimy dimensional beings are armored Bipedicus Flemoids, which are redesigned Imps; and the Flemoidus Cycloptis, the same as Doom‘s Pinky Demons but drawn to appear hovering blobs in a Krang-like UFO with tentacle arms. All of the weapons many of the items from Doom appear with new looks, with many unique spins of their appearance. Instead of a fist, your weak melee attack is a spoon, which is still able to send Flemoids back to their realm while also scooping up your Chex cereal afterwards (though you might want to wash it afterwards). Silly enough, the Chainsaw weapon is an electric vibrating spork. Most of the standard pistol and shotgun weaponry resemble Buck Rogers-style retrofuture remote controllers due to Ralston’s belief that rayguns looked too violent – though that doesn’t account for the bazooka and satellite dish designed plasma rifle, nor the Large Area Zorching Device (LAZ), Chex Quest‘s equivalent to Doom‘s BFG 9000. To further promote healthy eating, all health pack and potions are glasses of water, fruit and veggies, and the rare supercharged (with Chex, no doubt) breakfast plate to boost the Chex Warrior’s health up to 200% much akin to a Soul Sphere.

The five levels take place upon the planet of Bazoik, starting from the landing pad through a storage facility, a lab, an aroboretum, and caverns deep below the surface where the Flemoids have gunked up the place and held their prisoners of war. It’s not quite Phobos, but it’s quite colorful with its orange tinge. It’s not certain why so many Zorcher weapons and ammo are laying about on the planet before the Flemoids invaded, but that’s game logic. The gameplay matches Doom and many of its clones: find keys to open colored doors, blast baddies, find secrets. It doesn’t rock the genre in the slightest, but the design goes a long way. The cartoonish vivid black outline visuals stand out among many me-too clones trying to look realistic. The level layouts themselves are a lot more thought out than a large chunk of fanmade WADs available on paid shovelware discs and on the net. In fact, for many younger gamers or those not as versed or unable to download individual levels online, Chex Quest offered even people who owned the Doom titles another episode to run through for almost free. The only issues were the small handful of levels in total (Doom episodes offered 8 stages with 1 hidden) and the general lesser difficulty, though the latter was done intentionally for younger new players. Considering the price, it’s a nice short and sweet addition to your cereal purchase.

Curiously, the entirety of the Ultimate Doom WAD resides on the printed CD-ROM. Named the “Leftovers”, all the levels not modified for Chex Quest (Doom‘s E1M6 all through E4M9) are available via level warp cheats. Many of the textures and sounds are either replaced or removed, thus making any item, enemy, or switch invisible thus making any Leftover playthrough far more challenging, along with many walls covered in relatively blank or repeating tiles in order to remove as much of Doom‘s not-for-kids imagery. Even the unused interstitial text strings were replaced with filler congratulatory messages like “YOU DONE IT!” to try to cover as many tracks. Surprisingly, the non-level static backgrounds and music left unused or unaltered are still intact, allowing anyone savvy enough to access the missing stages able to see the moons of Mars and hell tower maps inbetween levels along with the end of episode graphics for episodes 2 through 4. In a pre-GTA Hot Coffee time period, the notion that kids could stumble upon imagery of decaptiated bunnies in a cereal box game would’ve been a PR nightmare.

Distribution of the game was packaged within millions of Chex cereal products that were available for months on store shelves. Added promotion and printing costs for the CDs were handled by AOL with 50 free hours of their internet services given away on the same disc. As an interactive advertisement, Chex Quest was a hit for Ralston. Sales jumped 200% during the promotion duration. The game would even garner two advertising awards for its effectiveness for boosting sales. It wouldn’t take long for the hungry fans to ask for more, and Chex was eager to rake in more sales even without CDs in their cereal boxes. 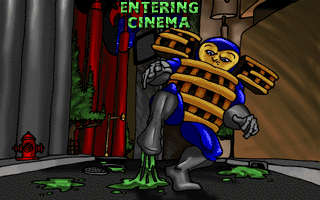 With the success of the first game, a second set of five stages were developed and placed as a WAD add-on mission pack upon the Chex Quest‘s website to further promote the cereal. Mirroring Doom II‘s plot, the plot of this sequel has Fred Chexter returning to his home planet only to find the Flemoid Menance had invaded while he was away. As the title suggests, the sequel takes place in Chextropolis, a vibrant futuristic space metro area, one that’s a lot more colorful and actually more detailed than the tattered grey and black box buildings that passed as skyscrapers in the middle section of Doom II. Once again, Digital Café added plenty of flair with items on countertops, chairs, tables, and other minor objects to make the world feel more alive.

The Chex City levels, for the most part, are built to resemble a more Earthly urban environment with many building centerpieces like a café, a movie theater, a museum with cartoonish portrayals of historical art and other displays, and streets with dark alleys filled with ambushes. It’s a shame that the final stage takes place in a dingy sewer maze, a bland sloggish bane of many games and no different here. The Cinema level was also a weak tread of blocky dead-end rooms to zorch through, enough that it was re-tooled in the compiled 3rd game WAD.

A few changes were made to the rogues gallery. The armored Bipedicus were swapped out for the more distinct and more imposing buff strong-armed Flemoidus Quadrumpus. The flying Cycloptis sadly were replaced with the less unique worm-like Larva mobs. The final boss is once again a redrawn Baron of Hell, though now a beefy mobile threat within a enclosed room, making him far more formidable. A minor tweak was made to the Zorch Propulsor weapon to make it no longer injure the player if he’s too close to the blast like Doom‘s rocket launcher splash damage.

As an added free treat, Chex Quest 2 served well as filling seconds to a nice platter. The ending screen teased a third installment was soon to come, but sadly the promotion had ran its course before development could go into full swing and the download services for Chextroplois were shortly terminated. Fortunately, fans kept the WAD in circulation on websites, along with unofficial mods and sequels and level sets within the community. It would take over a decade for a true sequel promised to come to fruition.

Despite fan mods and packs fueling the cravings for the long-lost sequel, no officially branded product was ever distributed from Chex themselves. It took the former heads of the team and their sound producer, spending months of free time as a labor of love to serve up the end of the trilogy. This late arrival included slightly updated versions of the 1st and 2nd game, all three built on the ZDoom source port engine, meaning that it’s available upon any system that supports ZDoom or any similarly built source port derivative can run all Chex Quest games within one file without fuss. Each game was repurposed as rechristened chapters much like the original Doom release, starting with “Rescue on Bazoik”, “Terror in Chex City” and finally the new set of levels known collectively as “Episode 3: Invasion!”.

One of the major additions to the third game is the usage of items and enemies that never had representation in the Chex Quest series. Early on, you can find night vision goggles used in a few later stages of Doom along with Flemoids based on Cacodemons and Lost Souls as well as the Spider Mastermind-inspired Flemoidus Abominus waiting for you at the end. The levels carry some added detail and complexity to their design, much of it thanks to the possibilites available via the ZDoom source engine. It stands as the most difficult of the Chex games but still falls short of the challenge in many later levels of the first Doom. Such dedication for the fandom for a total conversion series won the 3rd game and ultimately the series as a whole a Cacoward from Doomworld, a website focused on Doom engine mods and WADs alike. Even if the games themselves were the equivalent to mindless junk food, it’s a sweet gooey sugar rush.