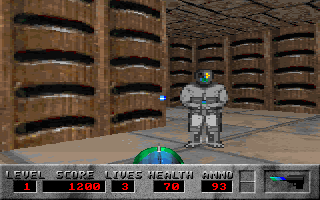 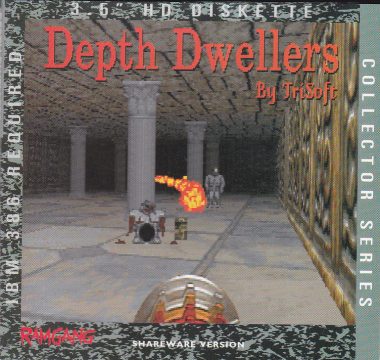 Everybody and their mother had to put out a first person shooter after id Software’s Wolfenstein 3D and Doom hit the gaming scene. Some companies made decent efforts, but others… Dear, oh dear. Some simply shouldn’t ever have been made. Enter Depth Dwellers, just one of many fly-by-night FPSes that came out during the Doom craze. The game’s pitch and package promises riveting action, graphics, music, and sound effects, but that’s nothing but lies.

Depth Dwellers tells the ever so riveting tale of two rival alien species: the Ora and the Ri. The Ri are using the Ora as slaves to mine a precious metal, and they killed the Ora princess. As an Ora sent into the Ri planet, you must free the slaves and stop their plans. The story tries being big and dramatic, but ends up being flat and trite. It’s hard to take such a premise seriously when it’s wrapped in such a turd of a game.

The engine feels a bit like a slightly improved Wolfenstein 3D engine in terms of technology. All walls are at 90 degree angles, with flat ceiling and floor textures. The engine renders walls that are two wall textures in height, but this does absolutely nothing to offset the fact that every single stage seems to take one wall texture and repeat it ad infinitum throughout the entire map. And some of the wall textures are, for lack of a better term, bizarre. Take the “wall speaker” texture in one of the later stages as an example. What do they do, torture the slaves with loud bubblegum pop? And the rest of the graphics aren’t any better. There’s very little in the way of animation, and everything in the game, from enemies to items, is an indecipherable, muddy mess of pixels.

Additionally, the large levels have locked doors and keys are hidden in very out of the way areas, which means that with the identical textures all over the walls, it may take you at least a good 10 to 15 minutes to finally locate a tiny, tiny key to open the exit door.

The engine has another vice: it’s mind numbingly, foot dragging slow. Your character drags along at a snail’s pace, and the run key doesn’t make you move much faster. The same key doubles as the strafe key was an idiotic choice; you’re either going to die trying to run or die trying to sidestep shots either way.

Even level progression feels extremely slow! Levels are very large, yet sparsely or inconsistently populated. Sometimes enemies will be all bunched into the beginning of a level, or into the very end of it, or somewhere in the middle. Furthermore, firing a weapon tends to draw all of the enemies in a map towards you. This has the unfortunate side effect of quickly emptying the stage of any dangers, and after you kill all who come at you, there may be nothing left to shoot at. There are no difficulty settings to speak of, either.

The slaves you’re supposed to save, at least in theory, are either wandering around the stages or chained to walls. You’re supposed to rescue them by going up to them and pressing a key, but it’s also easy for them to get caught in the crossfire and get killed. The game doesn’t penalize you at all for that, which means there’s no reason to bother trying to save them.

There are secret areas, but they’re never filled with anything useful, just items that give points. You might find a health recovery item or some ammo, but those occasions are rare. There are also additional weapons to find that replace your starting gun, which has a horrible rate of fire and will get you killed if you don’t get a new weapon quickly. There is a rapid fire gun, a grenade launcher (which can easily kill the player when used carelessly), and a flame thrower. While the flame thrower does have its use, it eats into ammo like a fly eats sugary snacks. All four guns share the same ammo, so if you run out of bullets once, you’re screwed and can’t attack at all.

There’s only one single music track in the entire game. It’s a simple, very repetitive, very slow-paced MIDI track that sounds more ambiguous and melancholy than you would expect for an FPS. It plays at the title screen. It plays at the menu. It never changes. It never ends. It just keeps going, and going. And if you thought the single music track is torturous, the sound effects are even worse! Nearly every single one sounds like it was made with someone’s mouth, and just slightly pitch shifted to sound a little different. And this includes nearly every sound in the game: firing guns, the goofy sounding “HOI!” of guards, and the moans of chained slaves sound even worse than one of those amateur Doom sound packs.

According to the readme files included with the game, Depth Dwellers was developed by only three people: a husband and wife team and a family friend. Further reading reveals the husband has a background in virtual reality simulations with NASA, so why would this game reek of such amateurishness? Even a complete lack of budget shouldn’t mean the entire game should feel like such an absolute chore to play. Some effort would have been appreciated.

Like many other FPS games that came out in the wake of Doom, Depth Dwellers reeks of one more example of someone trying to get a slice of the FPS pie on the cheap. Even other games that came out from small teams, like Nitemare 3-D, for example, were at least competent on a base level, with enough playability and some form of enjoyment. But the same can’t be said of Depth Dwellers. Nothing about this game is enjoyable at all. Slow gameplay, never changing music, eye burning graphics, and one of the single stupidest endings ever seen in a game (the game simply makes a goofy yell and prints the message “YOU ARE AWSOME !!”) make for an experience not worth having.

This game is everything but.