Back in the mid-90s, when first person shooters were known merely as “Doom clones”, the shareware scene was flooded with titles eager to play with their 3D technology. Many were not particularly noteworthy, but one of the most interesting ones is Radix: Beyond the Void. Developed by Neutral Storm Entertainment and published by Epic Megagames, it puts you in the cockpit of an interdimensional space fighter called a Radix, as you fend off an alien invasion by infiltrating and destroying their bases. On a surface level, these concept seems a little like Parallax Software’s Descent, at least in that it’s a first person shooter where you control a ship rather than a human, so they both take place in zero gravity environments. But the comparison is really only skin deep, for a number of reasons. 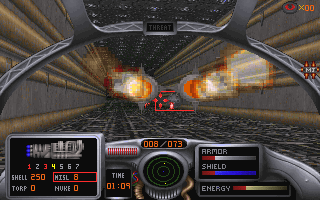 First off, Radix‘s graphics engine isn’t really true 3D – while Descent put you in huge, sprawling tunnels that weaved in every which direction, with full six degrees of motion, Radix is much closer to the 2.5D map designs of Doom. In other words, the map designs are flat, with no rooms over rooms. In keeping with this, the controls are much simpler, as you cannot turn directly upwards or downwards, or even fly upside down. However, the engine does support slopes of various degrees, so there is some advantage over the old Doom engine. 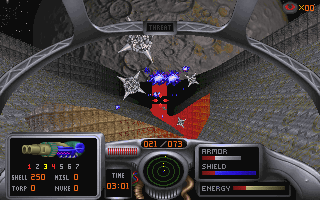 While technically less ambitious than Descent, that’s not necessarily a negative – since the controls are much less complicated, it allows the game for a greater focus on action. Enemies are numerous, with rooms often being totally packed with them, but they’re generally pretty weak and go down after a few hits. It’s a much faster paced game than Descent, making for a more immediately gratifying experience. 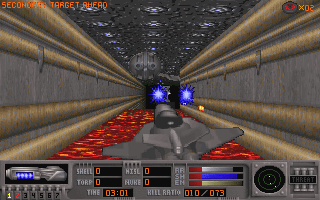 The controls are still a little cumbersome though. In the original release, your ship constantly moves forward, without any ability to stop in place. You can use the mouse to pilot the ship, but still need to use the Alt button the keyboard to strafe, as this was before the days of WASD. The left mouse button fires the default Neutron Cannons (which can be upgraded several times via upgrades found lying around) while the right button activates a speed boost. Both will drain an energy meter, forcing you to ration both your firing rate and your speed. Beyond the default Neutron Cannons, there are also a number of other weapons, which eat up separate ammo rather than energy. 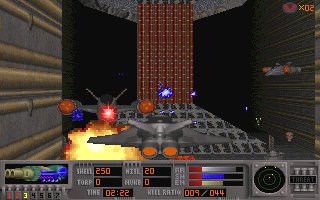 In a patch dubbed Radix REMIX, dubbed version 2.0, the controls were significantly reworked. Your ship can now hover, and the right mouse button now acts as an accelerator, which no longer uses any energy. The change is definitely for the better, as the maneuverability of your ship improves drastically when you’re not constantly bumbling forward. The patch also tweaked assorted other aspects, like level designs and weapon balance. 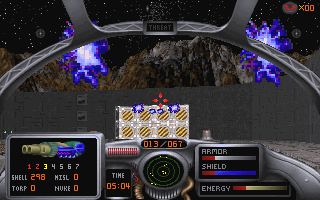 Once over the small learning curve, Radix: Beyond the Void becomes quite enjoyable, at least for a little bit. It’s hard to play gracefully, but it’s still a lot of fun to zip around, open up a barrage of fire on hapless enemy robots and watch them explode satisfyingly across the landscape. Things do blow up rather nicely in this game. But in the long run, it does get a little repetitive. The briefing at the beginning of each mission breaks down the primary and secondary objectives, and they all boil down to “blow up this thing” or “destroy these enemies to open up the next room”. That alone isn’t an issue, but the level design is so indistinct that they quickly begin to blend together. The layouts alternate between large, open rooms and the tunnels that connect them, with the same single texture plastered all around. They just aren’t particularly interesting to navigate. 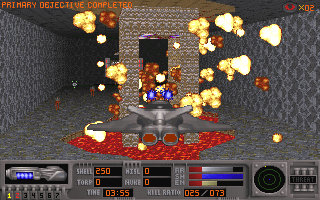 The visual design is typical of the era, with the interface having that 90s pre-rendered CG feel. All of the sprites – that is, your ship, the enemies and the power-ups – are CG renders too. There’s an option to set the camera behind the player for a third person perspective, but the game clearly wasn’t built for it, because it controls awkwardly and it’s impossible to actually aim at anything. Plus, by 1995, the Doom-like technology was being outshined by the Build engine, and of course, Descent as well. The music is decent though, offering a number of MOD music tracks, a raw style shared by many other shareware titles, particularly those from Epic Megagames. 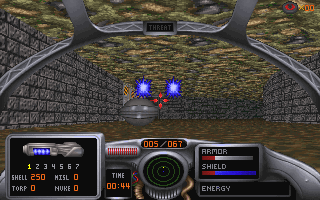 Despite its fairly unique take on the FPS, Radix failed to make much of an impact. Nonetheless, despite lacking in interesting level design or character, it’s a fun shooter from the rest, at least worthy enough for a quick shootbang diversion. 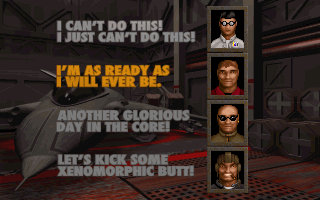 Also, as an amusing homage, one of the areas resembles one of the first rooms found in E1M1 of Doom. 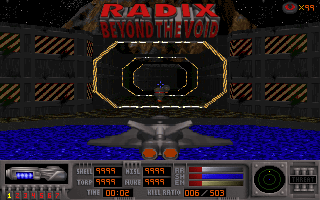