For those who grew up gaming with a DOS PC, a lot of people will hold the same reverence for Apogee that console gamers would have for Capcom or Konami. While the quality of their output varied from game to game, there’s no doubt that they were one of the best source of console-style action games during the DOS era. While they had dalliances with genres like shoot-em-ups, first person shooters, and even fighting games, they also released a multitude of platformers. Out of all the platformers to come from their own studio, Monster Bash (no relation to Sega’s arcade game or the 1998 pinball table) is definitely one of their most memorable. It’s a decent platformer that’s worth playing, if you can deal with some of the frustrations it offers.

One stormy night, young Johnny Dash is worried sick about his missing Dalmatian Tex. A monster under his bed soon informs him that his dog has been captured, along with all the other dogs and cats of the world, by the evil Count Chuck. (In an example of that inter-company trash-talking you never see nowadays, Johnny initially suspects Epic MegaGame’s Jill of the Jungle, and threatens to “kick her butt again”.) Count Chuck is planning to turn the captured animals into an army he can attack the human world with, and Johnny takes it upon itself to rescue the pets first. Armed with only a slingshot and a magic rock that gives him unlimited ammo, Johnny ventures into the Night Realm and battles against its army of horrors.

The goal of each stage is to free all the dogs and cats trapped within cages, and then find the exit. Levels are somewhat more linear than what you would see in your average Apogee platformer, but still far more open, almost labyrinthine, than what you’d see in most console platformers. The cages you’ll need to find are typically scattered across all corner of the level, however, and are often placed in out of the way corners that are easy to miss. The most help you’re given is a compass on the status screen that points in the general direction of the nearest cage, but this rarely ever leads to its direct path. It can be easy to get lost at times, but usually, following any direction that hasn’t all the enemies and collectable candy cleared out of it will eventually lead you towards where you need to go.

You’ll also encounter a variety of enemies between you and the kidnapped animals, from the living dead, to roving golems, wandering pairs of boots, and things from the swamp. Johnny’s primary form of offense is his slingshot, which can take out enemies in a handful of hits. One particularly interesting quirk is that the rocks you fire actually have some physics to them, as they’ll drop with distance and bounce off of surfaces. There’s plenty of points where the game will make use of this for certain puzzles, and while it can make certain things difficult to hit, it does help the game stand out. Every so often you’ll also come across special ammo, which will give your rocks the ability to split apart, turn into homing missiles, or drip down deadly napalm.

All of this combines together into a game that can easily become very frustrating. One particular issue is the game’s low resolution, which places a lot of enemies and obstacles just out of your field of view. Vertically, this isn’t much of a problem, since you’ve got buttons that’ll scroll the screen upwards and downwards. When you’re moving horizontally, however, it never feels like you have quite enough space to really get a good feel for what’s around you. Given how thick the average level can get with enemies, spikes, and precision jumps, this can lead to taking a lot of cheap hits. Playing on the game’s easiest difficulty is basically a must, since this will give you the most hit points to survive whatever you run into. 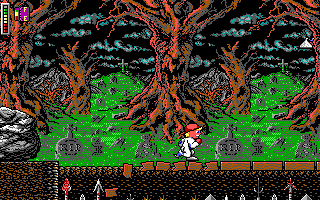 It really needs to be emphasized just how unfair the level design can get, as there’s so many little frustrations that add up. There will often be spikes plastered across the stage, forcing you to keep making precise jumps to avoid them. Some hazards are barely visible until you get near them, like the two red pixels that warn there’s a snake hiding nearby. Less lethal are mechanics that aren’t explained very well, like the way you can shoot certain blocks to move them around, or the way Johnny can climb up waterfalls. The biggest sin of all, however, are the fact that it can be easy to miss some of the hidden pets by the time you find the exit. Should this befall you, you’ll have to deal with all the aforementioned once more. You may even be forced through it more than once, depending on the last one-use checkpoint you last found.

The difficultly isn’t completely insurmountable, provided you take each trek of the level very carefully. Health powerups and checkpoints are just common enough that it never quite feels that you’re starved for them, provided you know how to conserve. Still, unless you’ve got some idea of what’s ahead, you’re basically dealing with a situation of attrition, where you’ll have less health and lives to get you to the next stage. The biggest kindness the game offers you is the ability to save your game at the start of each level, which can be invaluable if you have a particularly bad run. It’s this one feature alone that really saves the game from being too difficult to be fun, even if it’s still a major challenge.

On the rare times when the level design isn’t being your worst enemy, the game does manage to remain pretty enjoyable. The controls are responsive, although the jumping feels a little floaty at times. There’s some fun touches in the level design when it isn’t being overly unfair, like points where you have to use certain useful monsters to make your way from one point to another. Once you figure out how the pieces actually work, the puzzles aren’t especially challenging, at least compared to the constant array of hazards you’ll have to deal with. Figuring that out can leave you stuck for a while, as even the in-game hints offered don’t always explain things clearly.

Unfortunately, much like other shareware platformers of the era, the gameplay doesn’t really get shaken up too much between the three episodes. The biggest shift in gameplay comes in a stage at the very tail end, where Johnny gets a broom that lets him fly freely for the duration of the level. There’s also a handful of boss fights, including some mid-boss encounter with an evil Johnny clone, but they actually tend to be far easier than the levels themselves. Even the final encounter against Count Chuck is more about actually reaching him.

The presentation helps to make up for the game’s issues as well, if only a little. The Halloween theme is clear and present throughout the game, especially where the gore content is concerned. There’s a uprising amount of blood, as enemies bleed and explode into gibs when shot at, and you’ll frequently find guts wrapped around the copious amounts of spikes you’ll find. Thankfully, none of this violence befalls the young hero himself, which keeps it just on the right side between “spooky” and “uncomfortable”. Even burdened with a 16 color pallete, the sprites are colorful, reasonably large, and varied. Unfortunately, the same can’t be said for the backgrounds, and you’ll often spend just a little too long staring at a brown dirt wall. The copious use of digitzed samples adds a lot to the presentation, and are best used instead of the PC speaker effects if at all possible. The music, while not amazing, remains thematically appropriate, and the Adlib cover of Bobby Pickett’s ‘Monster Mash’ is fun to listen to.

Monster Bash comes close to being a truly great DOS platformer, and there a few rare moments when it achieves that goal. Unfortunately, its underlying flaws are too difficult to ignore. What enjoyment you might get out of it really depends on how patient you are, as anybody lacking in such will probably give up pretty quickly. Still, for anybody looking for something new to try for the Halloween season, the fact that its portion is still free means there’s plenty of potential enjoyment for anybody looking for spooky fun.

Realms of the Haunting
Night mode