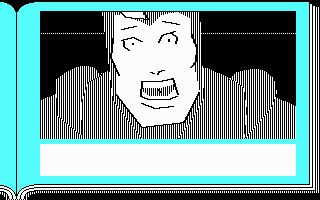 By 1988, text adventures were on their way out. Infocom kept hacking it at, but their overlords at Activision realized they needed to try a different route. Instead of developing graphic adventures, though, their first idea was to create a new type of product they called “Infocomics.” They were not actually games, but rather animated stories with minimal player interaction, being cheap to develop and released at budget prices.

The releases were met with equal amounts of apathy from consumers and derision from critics, and as such, there were only four released. Two were based off Zork, one (Gamma Force) was based on an original property, and one was based on Lane Mastodon, the ’50s sci-fi TV serial homage featured in the comic book included with LGOP. They were not actually developed by Infocom, but instead outsourced to a group called Tom Snyder Productions, which may explain their terrible quality. Beyond sharing the Lane Mastodon character, there is nothing else to connect this game to the Leather Goddesses of Phobos series. 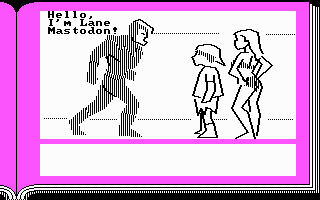 As the story begins, random animals are being enlarged to gigantic proportions by a mysterious ray from space, causing mayhem around all of the planet’s landmarks. The perpetrators are the nefarious Blubbermen – fat, shape shifting monstrosities with a taste for world domination. The only one who can stop them is Lane Mastodon, who’s out on vacation and stranded in the middle of nowhere. After running into two kids on a seemingly derelict vessel – the genius 13-year old boy Lambert Edison and his attractive older sister Ivory – the trio returns to Earth to face off in a climactic duel against the treacherous Blubbermen.

So, for the most part, all you do is sit back and watch the story unfold. The only interaction comes when you can choose to follow the plot threads of different characters. Watching all of these divergences is necessary to fully understand the story, so at any time you can choose to fast forward or rewind, skipping stuff you’ve already seen or backing up to choose a different branch.

It’s an interesting idea, but for all of the grandstanding about creating a new form of media, it completely falters because it looks awful. Developed for the Commodore 64, Apple II and CGA-era IBM PCs, the artwork is abysmally simplistic, looking pathetic compared to Sierra’s AGI games, which, by 1988, were pretty dated themselves. There’s some cool scaling and panning trickery, and occasionally bits of animation, so you’re not just watching static frames, but that doesn’t excuse how incredibly sketchy it all looks. The IBM PC version has a higher resolution than the other versions, but those have better coloring. To top it off, the writing is terrible. It’s supposed to be a cheesy comic, but it comes off more like a kindergartner’s picture book. Meretkzy was apparently involved in the production, but the text shows none of his wit. Its humor is also pretty dull, other than a few amusing allusions – Lambert wields a sonic hammer, a take on Doctor Who’s Sonic Screwdriver, and there are a few fourth wall breakages which show the story being viewed by a pair of Siskel & Ebert caricatures. But it’s a far, far cry from real Infocom games, and its reputation as a disaster is completely justified.