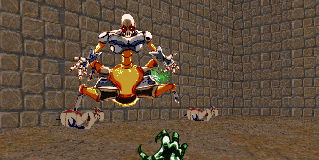 Quiver was developed by Mike Taylor under the banner of ESD Games, which has no other video game projects to its credit. Taylor developed Quiver as a Doom clone that could run smoothly on low-end computers, but still provide a fun Doom-like experience. To achieve this, Quiver was developed on “an archaic 486DX33 system with an ancient 512K VLB (VESA Local Bus) VGA card” according to the readme file. A noble effort to be sure.

The joke was on Taylor, though, as even low-end computers, weaker even than the one he developed it on, could run Doom without too much trouble. He should have focused less on making a game that could run on obsolete hardware, and more on a game that was distinct, memorable, and even fun. 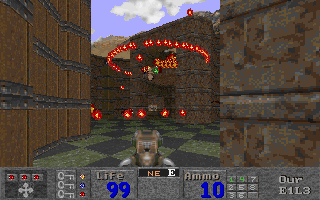 Everything about Quiver is unremarkable. Casually blast your way through unremarkable levels portraying indistinct locations, using indistinct guns to shoot unremarkable fireballs at unremarkable enemies. Even the plot is forgettable, and is conveyed in a single, short, disinterested paragraph: aliens have stolen your race’s time orbs and gone back in time to alter your history, presumably for the purpose of an easy takeover. Even Chasm: The Rift, another unsuccessful FPS, handled this premise much more effectively, with unique monsters, distinct environments, palpable atmosphere, and a cool limb-severing mechanic. Quiver is just ugly and dull.

The sound in general is muted and lackluster: you usually can’t tell one monster from the next by their sounds alone, despite each enemy type having a different alert sound. The music is okay at least, composed by David B. Schulz (Nitemare 3D, Rings of the Magi) who was not incapable of generating spiffy tunes.

The graphics aren’t quite the same flavor of amateur hour as, say, Depth Dwellers, but the textures really only come in three varieties: dull gray bricks, stale chocolate cake, and Friendship Is Magic. The monsters are all hand-drawn and badly rendered, with severely limited animation; indeed half the monsters are just palette-swaps of each other. The projectiles all look the same. And good luck telling your guns apart at a glance (it’s a lot like modern shooters in that respect, at least).

Like the enemies, all weapons basically shoot “fireballs”. The spiker, your starting weapon, rapidly shoots little spiked balls, and there’s no backup weapon if you run out of ammo for it. The fajita maker rapidly shoots three fireballs in a spread, and the blaster slowly shoots five in a spread. The alien shredder very slowly winds up and pitches a widespread cluster of exploding spike balls. Noticing a pattern yet? 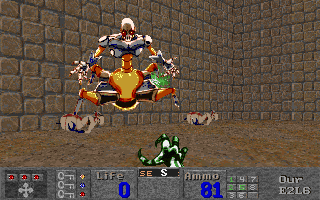 A couple of weapons do manage to distinguish themselves at least. The shredder (the regular one, not the “alien” shredder) fires a cluster of red bombs that sticks to the wall, then detonates in a ring of fireballs after a one-second delay, or detonates instantly when it touches an enemy. The coolest weapon is the medusa sphere, a 3D glass orb with a nifty distortion effect: it reflects all enemy projectiles back at the shooter… as long as you’re hit from the front.

Ammo and health pickups are 3D cubes like those in Quake, with the picture of said ammo type on the box… usually mislabeled. You’ll see a box with the spiker projectile on it, and grab it on the assumption that it’s spiker ammo, only to have the HUD tell you it was a pack of fireballs for the fajita maker. Also, if you’re wondering why your maximum health is so high, it’s because some of the alien weapons use your health as ammunition. It is doubtful you would bother using them when every gun seems to deal roughly the same damage, though I suppose they make for suitable “last resort” weapons when all other ammo reserves run dry.

Even less distinguished than the guns are the alien baddies you use them on. Though there are about a dozen or so monsters throughout, you can boil them all down to a mere three: robot spiders, flying aliens, and turd worms. The robot spiders come in a variety of sizes, from super tiny R2D2-faced droids, to large ‘bots with generic terminator torsos, all easily killed and tediously numerous. The alien invaders are wasp- or polyp-shaped flying creatures that don’t pose much of a threat, and sometimes have tutti-frutti robo-orbs backing them up. They all shoot you with large individual fireballs, or spam you with an endless stream of little fireballs. The only monsters with no projectile attack are the turd worms, which look like badly-rendered snakes made of undigested hushpuppies from Long John Silver’s. And sometimes there are “boss” critters at the end of an episode (the game is divided into three, like Doom, plus a slot for an add-on episode that was probably never released).

Quiver does allow for a few cool features that Doom lacked, such as bridges you can pass over and under, horizontally sliding doors, and jumping. The jumping is badly executed, though, and feels more like a slow ascent via rocket boots, which then drop you like a rock at the peak of the jump. 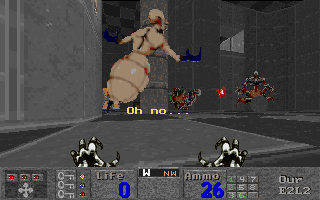 Ultimately Quiver is a faster-paced and slightly more interesting Depth Dwellers: ugly as sin, amusing for the wrong reasons, but not totally unplayable. The fact that its maps are Doom-ish and not Wolf3D-ish does add to its replay value, but at least Depth Dwellers is bad enough to be laughed at. Quiver is just… well, unremarkable, which is probably worse. At least the gameplay isn’t slow as molasses, though.

Play it for the novelty of experiencing an obscure Doom clone developed in somebody’s basement, but don’t expect to be blown away, nor to ever play it again.