Combining a point-and-click adventure with a first person shooter, two hot genres in the computer gaming scene in 1993, should have been a brilliant idea. It wasn’t. Isle of the Dead, developed by flight-by-night outfit Rainmaker Software takes the worst elements of both genres and turns them into an overtly shlocky mess. You play as a random guy who crash lands on an isle filled with zombies, and must fight them to rescue a damsel in distress of some kind, and destroy the local mad scientist. 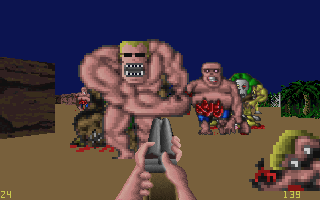 The first person segments are created using something akin to the Wolfenstein 3D, and looked immensely dated compared to Doom. Other games, like Blake Stone and Corridor 7 had also been released around the same time using similar technology, but at least those were playable. Isle of the Dead starts off having you run around in circles on nearly identical looking maps until you find the textures that look slightly different from the rest, allowing you to chop them down with a machete or otherwise enter them. There is a map screen, but it only shows the immediate area and doesn’t indicate any exits, making it largely useless. There are tons of items strewn about, but you need to hit the G key in order to pick anything up, which practically requires that you stop in your tracks to grab anything.

Whenever you enter somewhere that doesn’t involving shooting or exploration, it changes to the adventure segments, which also utilize a first person perspective. The only real goal behind these scenes is pixel hunting – there’s no real writing and attempting to look at the scene of bloodied, crushed bodies in the airplane crash will only be met with the response “Nothing of interest”. Looks pretty damned interesting to me! Per usual protocol, missing items in one spot will result in unwinnable situations later on and there are plenty of instant deaths. The first weapon you find is booby trapped with an explosive, and it will blow up in your face if you fire it without oiling it.

Death is pretty much everywhere, obviously. There are roughly half a dozen zombie-types who all act the same way, but their quality is roughly the level of a Wolfenstein 3D fan mod. Although they have no distance attacks, they do attack in great numbers. Mowing down legions of them with a shotgun and watching their absurdly overdone death animations is briefly amusing, but there’s little feedback to indicate that you’re taking damage, especially from behind, resulting in many situations where you appear to die out of the blue.

The only real reason this game seems to exist is for the numerous death animations, done in animated comic book-style format. They’re unnecessarily gruesome, and while watching a horde of zombies feast on your entrails while tossing your decapitated head to the side is a little bit goofy, quitting the game results in a scene of your character blowing off his own head with a shotgun, which verges too close to the side of tastelessness. (The video scenes are all in FLIC format in the directory, so you can watch them outside of the game if you have an appropriate media player.) Given the cheesy introduction and general scumminess, it’s clear the developers really wanted this to be more no more than a Z-grade Troma-style game, and in that way they almost succeeded, but that’s not really a high bar to reach for, is it?