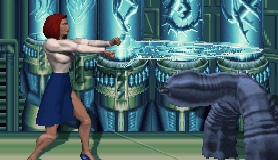 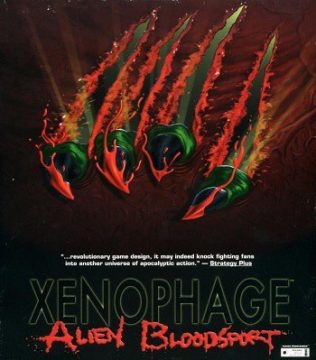 Back in the mid ’90s, fighting games had reached their peak of popularity, and every major developer had at least one under their name. Fighting games on the PC tended to be much rarer, however. So it was more or less guaranteed that Apogee would make one of their own, especially since Epic had published the robot versus fighter One Must Fall 2097 a year earlier. Something great could have been in the making, but then Apogee outsourced the game’s development to Argo Games, a shareware company best known for their Reversi clone Hexxagon.

The plot is your standard fighting game fare: An alien race has captured eight different species and put them in a death tournament. The losers apparently have either their breeding rights revoked or their planet destroyed. Which outcome isn’t made entirely clear, as the voice over claims it’s the first one over a clip of a planet exploding. The best part of the intro is the reaction Nick, one of the game’s human characters, gives to this news: A bored “Oh, no,” that makes it sound more like he’s just lost his keys. 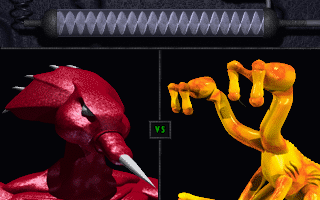 As for the rest of the characters, the other human is Selena, who happens to somehow happens to be even more poorly modeled than Nick. She is the only character affected by “orchid” cheat code, which causes her to stop move and start to “stiffen” every time it’s entered. Toad is a large, reptilian creature that looks a little like a mutated Yoshi, while Mouth is small, stubby blue creature that fights in an alien observatory. Squid is large creature that looks like an anthropomorphic octopus, which would have a much cooler design if it didn’t have a giant belt buckle around its waist like the one you find on a cartoon pilgrim’s hat. Worm is strange looking alien made of four tubes, with one for the head and two for legs – he’s one of the more interesting looking characters seen in a fighting game, even if its design looks as lazy as it does.

Bat is the fastest character in the game, who’s able to fly across the screen with its wings, and Spike is a large, two-headed reptile-like creature that uses the claws on its limbs like spikes. Hence the name. Parasite is one of the cooler looking aliens, who uses its legs to move itself around like a pinwheel, and serves as the game’s sub boss. 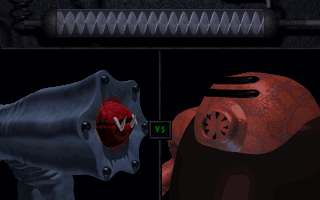 Champion is the game’s final boss. Given that he’s a fighting game boss from the mid ’90s, it’s expected he’ll be entirely unfair. First off, his projectiles actually go over your character’s head, so you can’t even win a fireball war against him. Secondly, he actually changes to a quadripedal second form and gets all his health back once you beat him. You don’t get health back, yourself. This wouldn’t be really as bad if he didn’t point and laugh at you like he was Nelson from the Simpsons when he beats you.

There’s also Blarney, a joke character that can only be unlocked by editing the game’s configuration file. It’s obvious they weren’t even trying to hide who this purple dinosaur was based on, so the developers must have been trying to catch onto the “Kill Barney” craze from the ’90s that all the 13 year olds loved. He’s practically unusuable as a playable character, since his only attack is to shoot hearts at his opponents. He also tends to crash the game.

The fighting uses your standard SNK-style button setup, with two buttons for punches, and two for kicks. Unfortunately, the actual fighting tends to be slower and clunkier than even some of the worst PC ports of better fighting games. Performing special moves is spotty at best, and even though the game has a combo counter, how you actually execute them isn’t clear at all. Everybody also tends to take way too many hits to die, meaning more than one match is probably going to end in a time over whether you want it to or not.

The AI also tends to be pretty nasty, usually predicting anything you try to do and countering before you get the chance. The best tactic is to use a spammable move lower its health and start playing keep away until time runs out. Unforunately, the last boss has an infinite timer, not to mention you have to beat both his forms on one life bar. That wouldn’t be nearly as bad if you didn’t have to beat the game on three continues.

Compared to One Must Fall 2097, Xenophage looks even worse. There’s no pre-battle quotes or any other semblance of character personality, no secrets, or anything to unlock besides the boss characters. There is a training mode, but even that is basically worthless since the inflatable clown dummy you’re forced to use as an opponent will always pop back up and hit you every time you knock it down. 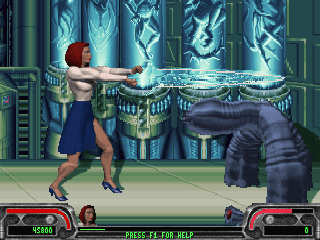 The graphics are made of the cheap, blocky CGI that infected most of the mid ’90s, and the humans are modeled so poorly that they’re straight in the middle of the uncanny valley. The aliens tend to look a little better, although even the best designs tend to look like they came out of somebody’s copy of Spore from the future. The actual backgrounds themselves are much better looking, and a few of them have some interesting details. Spike’s stage has little larva that crawl across the ground, while Selena’s stage has a clock that actually matches with your system clock. As you’d expect from a cheesy fighter like this, there are fatalities, referred to here as “Meat” moves, but they’re all just boring head rips. The move that you can perform after them that makes them spontaneously combust is…interesting, though.

The music, composed by Bobby Prince of Doom fame, is actually the best part of the game, and a couple of the tracks are the fast-paced metal stuff you’d expect him to compose. Although his inspiration for the Doom soundtrack is common knowledge, it’s pretty odd that nobody noticed that the training mode has a song that sounds WAY too close to the theme from the Mortal Kombat movie. One other amusing thing about the sound is that this game has an anti-Perfect: Lose a round without getting a single hit on your opponent and you’ll get a “Pathetic!”.

Even with such a tiny selection of PC fighting games, even back then, there’s pretty much no reason to play Xenophage, especially since One Must Fall came out a year earlier. It’s ugly, hard to play, and unfair. It’s easily one of Apogee’s worst titles, which is probably why it ended up being released as freeware on the 3D Realms website.