The success of Xanadu on PC platforms was too big to ignore, so plans came together to create a version for the Famicom. The job went to Hudson, who would later work together with Falcom on Ys. Rather than porting it, they tossed out almost everything from Xanadu and created an entirely different game, named Faxanadu. The reason why has never been made entirely clear, but it’s probably because the developers felt that the original computer game was too difficult and obtuse, and instead created something more suitable for the console audience. The title comes from a portmanteau of “Famicom” and “Xanadu“.

The player takes control of a wandering Elven adventurer who returns to his hometown of Eolis to find it in a miserable state. The local Dwarven population has been turned into monsters and began attacking the World Tree, cutting off their water source. As the only able-bodied warrior, you’re chosen by the king to enter the tree, defeat the evil forces that corrupted it, and save the village. 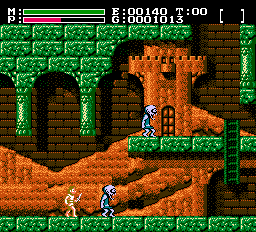 While it’s not close enough to deem it a rip-off, Faxanadu is very clearly inspired by Zelda II. It’s a side scrolling action-RPG where the player must explore towns, kill enemies for gold and experience, and find equipment to clear barriers. However, there is no overhead map or random battles, making for a more consistent experience.

At the beginning of the game, controlling the hero is a little awkward, considering it takes up a couple of steps to ramp up to full speed, and jumping doesn’t quite feel right. Plus, the weapons at the early stages of the game are very short and tough to use. But these are things that you can get used to, and you eventually get better weapons as the game goes on. In addition to melee weapons, you also get magic spells, most of which are forward firing projectiles. For some reason, you can’t duck, so magic is the only way to kill certain enemies that lie close to the ground, otherwise you need to jump over them. Similarly, magic is also required to beat the bosses. Unfortunately, your MP is in limited supply, and there’s no way to replenish it without recharging at the towns. It’s always a bummer to beat a dungeon and have to crawl your way back to the entrance with no magic. In one of the few nods to the original Xanadu, you gain experience when fighting, but only gain levels if you visit a church. This will increase your rank, though the only thing this actually changes is how much gold you receive after dying or restarting a game already in progress. There is no battery save, but there is a password system. 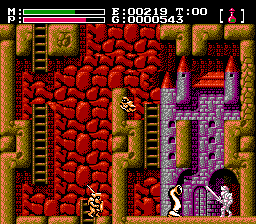 Compared to a lot of action-RPGs from the era, Faxanadu is remarkably straightforward. While the levels occasionally require a bit of exploration, you’re rarely at lack of direction, and the townspeople actually give relevant clues on how to proceed. There are some minor translation snafus, but it’s still remarkably less confusing than something like Castlevania II or Falcom’s own Legacy of the Wizard.

The graphics aren’t exactly attractive, considering the overtly brown color palette, but there are very few games that take place almost entirely inside of a gigantic tree. Most of the levels are set by its roots, jumping up and around its branches, or delving into rooms built into its skin. The character’s sprite also changes depending on their equipment, which was a novelty in this era of RPGs. The music is chirpy in spots, but some of the main themes are catchy. 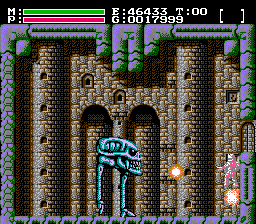 There are also some rather rather goofy looking shopkeeper portraits. It was published before all Nintendo of America’s censorship policies were finalized, so many townspeople are seen smoking. However, the religious iconography has been removed or changed. The password-giving members of the churches are clearly supposed to be priests, even though they’re called “Gurus”. The Japanese version also lets you name the main character, whereas he’s nameless in the English versions. 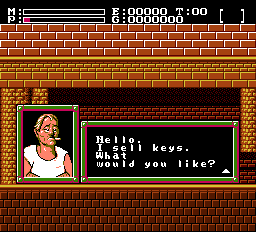 In North America, Faxanadu was clearly marketed as a follow-up to the Zelda lineage, with the cover artwork even features a shield design meant to invoke the original Zelda. It’s not quite up to the level of quality of Nintendo’s games, but as far as action-RPGs on the NES go, it’s not too shabby, and it’s aged one much of better than the PC Xanadu.