It comes to no surprise that Outrun was a major hit in the arcades. While racing titles were a staple before and well after its release, Sega’s little cruising simulator spawned many a clone where the only race is against time as you speed through the countryside. Obviously, many of the imitators lacked the hardware or magic touch to rival AM2’s masterpiece, but even then, many ports of the real Outrun were difficult to port over to inferior home consoles and computers. Indeed, the NES was not the powerhouse the arcade board was, but many technical tricks for simulating driving into a vanishing point has been widely used on 8-bit systems before Nintendo’s baby was born. Their own in-house F1-Race was an early release for the console, but that was 1984 and trying to match Namco’s Pole Position. Anyone wishing to not be left in Outrun’s dust on the system would have to step up their game. 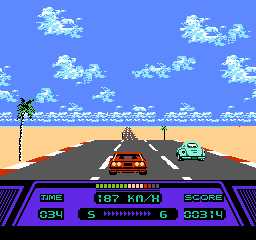 Before Square made their landmark last-ditch effort of Final Fantasy, they dabbled in many genres. After hiring programming wiz Nasir Gebelli for his faux-3D sprite coding, they developed 3D WorldRunner, a running platformer title that draws many parallels to another “super-scaler” arcade classic by Sega: Space Harrier. Their follow-up continued with another show-off of their programming abilities on the NES, going for a tried-and-true method of showing speedy faux-3D with a racing game.

It’s quite easy to think of Rad Racer as the Nintendo platform’s answer to Sega’s Outrun. Both deal with driving down a long highway rather than a track, have traffic to avoid, sport a red Ferrari (this one a 328 Twin Turbo, to be precise), offer a handful of tunes to choose from like switching radio stations, and both have their first level take place on a palm-tree lined road next to a beach. The driver even has his girl sitting passenger side the whole journey, although this bit of info isn’t shown until the ending, where the girl drives off with the car while the boy is still waving bye. However, Rad is split into 8 distinct linear levels rather than a continuing trek with branching pathways. Rad also implements a turbo boost to crank up the speed when needed. Unlike in Sega’s sequel, Turbo Outrun, boosting is unlimited once you already driving at 100 km/h with no fear of overheating – although that added speed may cause collisions with other cars. Also like Turbo, Rad is a drive across varying points and cities across the United States, or areas that could feasibly be in the US. That is, except a trip through Athens with distinctly Ancient Greek temples like the Parthenon in the background, but again, the roads aren’t linked stage to stage. Rad Racer also gives the player the choice between a Ferrari or F1 car to drive, though the difference is cosmetic only, with the other cars on the road being switched out with fellow F1 racers. 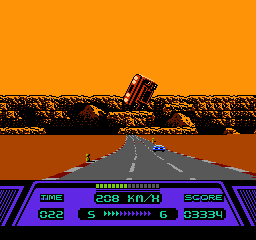 Square’s team certainly were able to crank out the sense of speed. Though the sides of the 3-lane highway are sparse, everything whizzes by at a blazing clip, outdoing even Sega’s Master System port of Outrun. The background helps with the effect, having different scrolling bars for the fore and distant objects along with a rising and dipping horizon line for turns and hills. The lines on the road itself are also crisp with little jaggedness like Nintendo’s earlier racing takes on the system. The colors also pop for each stage’s palette with some vivid night courses through California metros of Los Angeles and San Francisco. A handful of levels also have sky color changes to simulate weather or time shifts during progression. The sound effects have a nice kick so the rev of the engine and screech of the tires on a turn add to the visceral thrill, even after taking a hit at high velocity that sends you and your car flying high into the sky. The music doesn’t quite measure up, unfortunately. While the trio of songs can be catchy enough, especially Track A, the lack of any bass causes them to lose any oomph. Clearly, Nobuo Uematsu was still finding his way with the NES sound chip at this point. The choice of no music is an option, though.

Rad Racer does keep its difficulty at an arcade level. Liberal usage of the brake is essential for each and every turn. Aside from that, the other cars prove to be an ever-present gauntlet to weave through. Later stages love to throw more and more cars that change lanes as you approach, and any collision with them is liable to send your car soaring or bumping right into an off-road hazard, and these final levels give barely enough time per checkpoint for any car-flipping accidents. A simple A+Start with allow the player to continue from their last stage, but be prepared to perfect each course. Many runs may have the player slowly coasting after the time runs out, hoping to inch over a checkpoint or the finish line to keep going. 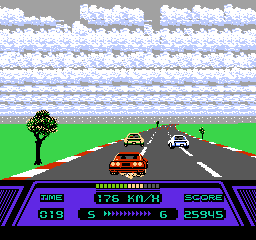 Ultimately, the major fault to Rad Racer has been time itself. Advances in the genre coupled with easier methods to play even the arcade classics it was aping make returning to this NES title less than optimal for high-speed thrills. The lack of a personality makes the game stand out less amongst later peers. That didn’t stop the game from being a moderate success in its heyday Stateside, with Rad still bringing from fun on its own merits if played in the mindset of its release.

Japan had an added perk with its release. The game was compatible with the rarely-used Famicom 3D System shutter shades. Hitting the select button switches the graphics to a flickering stereoscopic effect. This too copies the trick used when using Sega’s SegaScope 3D Glasses with Outrun 3D on the Master System (which was a EU-only release published a number of years after Rad Racer). The Famicom headset peripheral was never released outside of Japan, so the other regional versions were recoded to flicker from a darker blue & red color scheme and used standard paper 3D glasses packaged with the game. The effect is less than desirable, with the stages losing their distinct palettes in the process. 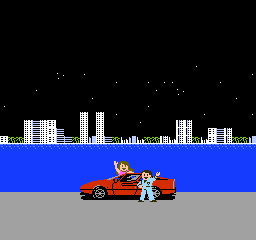 The Playchoice-10 edition removes the 3D option entirely. It’s unknown if the name change from Highway Star to Rad Racer was to bank on 80’s tude, to distant itself legally from the band Deep Purple’s hit single of the same name, or both. It also generates some confusion because there’s an unrelated computer racing game by the same name by System Sacom.