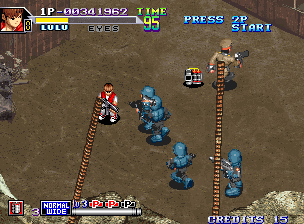 What’s most immediately noticeable about Shock Troopers: 2nd Squad isn’t the few ways that it expands on Shock Trooper‘s gameplay, but rather on what’s been removed from the original. The amount of levels, paths through the game, and amount of characters have each been severely reduced. After the first level you are given the choice of two sets of two levels, through either a mountain route or a sea route, and then will play the same fourth and fifth levels, for a total of seven levels and two possible paths through the game. Inexplicably, the character selection has been reduced to four, and, worst of all, Team Mode has been removed entirely. Maybe this game had stricter time or budget constraints, but its still disappointing to have all these things that worked so well in the original taken out completely. At least the four playable characters are fresh:

Nicknamed “Lion Heart”, Leon is a commando who wears glasses, with the highest possible Attack and Defense rankings, but the lowest possible Speed and Evasion rankings. His weapon is a standard machine gun, his melee weapon is a knife, and his bomb is a napalm bomb that causes a path of explosions and eliminates every bullet on screen – making it probably the best bomb in the game.

VERY oddly nicknamed “Ceramic Arms”, Angel has Speed and Defense rankings of two out of four, but makes up for it with Attack and Evasion rankings of three out of four. Her weapon is a double barrel machine gun that fires two streams of bullets, her melee weapon is tear gas, and her bomb is a napalm bomb that explodes to its left and right and stays on screen for a few seconds, making it great against bosses. She also has a very small shirt and extremely large… uh, hair.

With the strange nickname of “Lightning Eyes”, Lulu has the highest possible Speed ranking and an Evasion ranking of three out of four, but the lowest possible Attack and Defense rankings. To compensate for her lack of power, she wields a firearm that shoots in several directions at once. Her bomb is a standard video game bomb and her melee weapon is a revolver. Lulu is kind of like 2nd Squad‘s equivalent of Fio, in that she is portrayed as being cuter than the other characters.

Completely nonsensically nicknamed “Ice Brain” (!?), Toy wears a t-shirt with a skull on it and has an absolutely ridiculous hairstyle in a ponytail. His Attack and Evasion rankings are two out of four, but his Speed and Defense rankings are three out of four. His weapon is a laser beam, his melee weapon is a TASER of sorts, and his bomb causes an explosion to engulf him and makes him temporarily invulnerable. 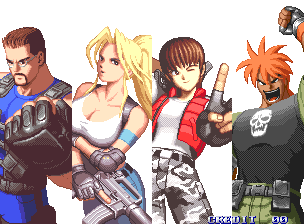 The basic gameplay is pretty much identical to the first game, but it’s been expanded on and modified with varying results. The buttons for jumping and bombing have been switched, and the D button no longer does anything because there isn’t a Team Mode anymore. Shock Troopers‘ health bar has been retained for 2nd Squad, but rather than a lone life you have three lives per credit. However, its difficulty has been given a major boost, and 1cc-ing the game will prove to be extraordinarily difficult. Each hit you take knocks off at least a good third of your health bar. The evasion technique works the same way, but it does not move your character as far out of harms way.

Combat has been changed a bit to give it more variation. Rather than being limited to either a standard shot or a slightly wider shot, each character has their own distinct weapon. Finding three power up items that are denoted with a “P” will raise your weapon’s level up to a maximum level of three. If your character is hit, a power up item is knocked to the ground and has to be quickly reacquired. You will find vehicles along your way in the form of tanks, jeeps, and mechs. You have to jump into them to enter them, and jump again to exit them. Holding the A button will charge your vehicle’s shot, but if you are hit while it is charging, then the charge will begin again, making this technique less beneficial than it could be otherwise. Lastly, while in a vehicle you can perform a technique called a “Shock Attack” by pushing both the A and B buttons at once. Otherwise the vehicles control identically to your character, except without a melee attack. 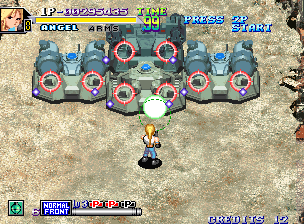 Shock Troopers: 2nd Squad has a different scoring system from its predecessor. After each enemy that you kill with your melee attack, a point multiplier will go up. As long as you keep attacking with your melee weapon only, and do not get hit, it will progressively move through a pattern of x2, x3, x4, x6, and x8, at which point it maxes out. Interrupting the pattern by getting hit or attacking with any other weapon will reset it to x2. Bombing multiple enemies with the same bomb will cause the same multiplier to go up and follow the exact same pattern, but only for that individual bomb. Your next bomb will reset the multiplier to x2. Killing multiple enemies with the same shot from a vehicle will give you the same multiplier for each. How high exactly the multiplier goes is determined by how high you charged the vehicle’s shot, but it can only go up to x6. You are also rewarded a rank after finishing the game, but I have absolutely no clue what exactly determines your ranking.

The plot of the game is simply that there is a organization called Dio Corporation that is trying to do something not so nice, and you have to stop them. The fifth and final level leads to a confrontation with the enemy’s leader in a large office room decorated with several suits of armor where he is seated behind a desk. He laughs and escapes down some kind of trap door, and the view then changes to a scene from inside a missile silo below the compound. The enemy leader confronts a eye-patch wearing man who, after a brief exchange of words, proceeds to shoot him in the chest, killing him. After this a fight against the real final boss begins with him on a giant spinning thing in front of the HUGE missile in the background. After he is defeated, he will practically explode in a fountain of blood and then plummet to his death. The missile will collapse as well and the world will be saved. 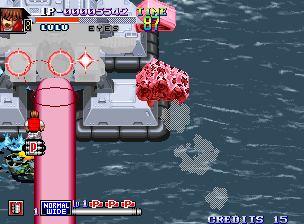 2nd Squad‘s graphics have been given a complete overhaul from those of Shock Troopers. First of all, just about everything has a computer rendered, vaguely inspired by Donkey Kong Country and similar to Blazing Star and Pulstar, two other shooters for the Neo Geo. They look alright, but they’re also a bit dated looking in comparisons to the original’s more traditional pixel artwork. The boss designs though, have significantly improved. Shock Troopers: 2nd Squad has HUGE machinery as bosses, like in Metal Slug. Each consists of multiple segments that need to be destroyed piece by piece, and a few don’t even fit entirely on screen.

Shock Troopers: 2nd Squad is often viewed as a disappointing follow up the original. Just like with Gunstar Super Heroes, Shock Troopers: 2nd Squad really only makes the mistake of sharing its name with a superior game. If judged by itself, it is really a great game and if it had been released as a stand alone with a different name, it would be recognized as such, rather than as an inferior sequel. The biggest reason for its reputation is obviously that so much has been removed from its predecessor, but at least it did introduce vehicles to the series and give the characters more variation from each other. Even if you ignore everything that was removed, there is slight slowdown when the screen gets filled with enemies and bullets. Its slowdown really isn’t bad enough to be a problem or anything, but it obviously does little to make it better than the original.