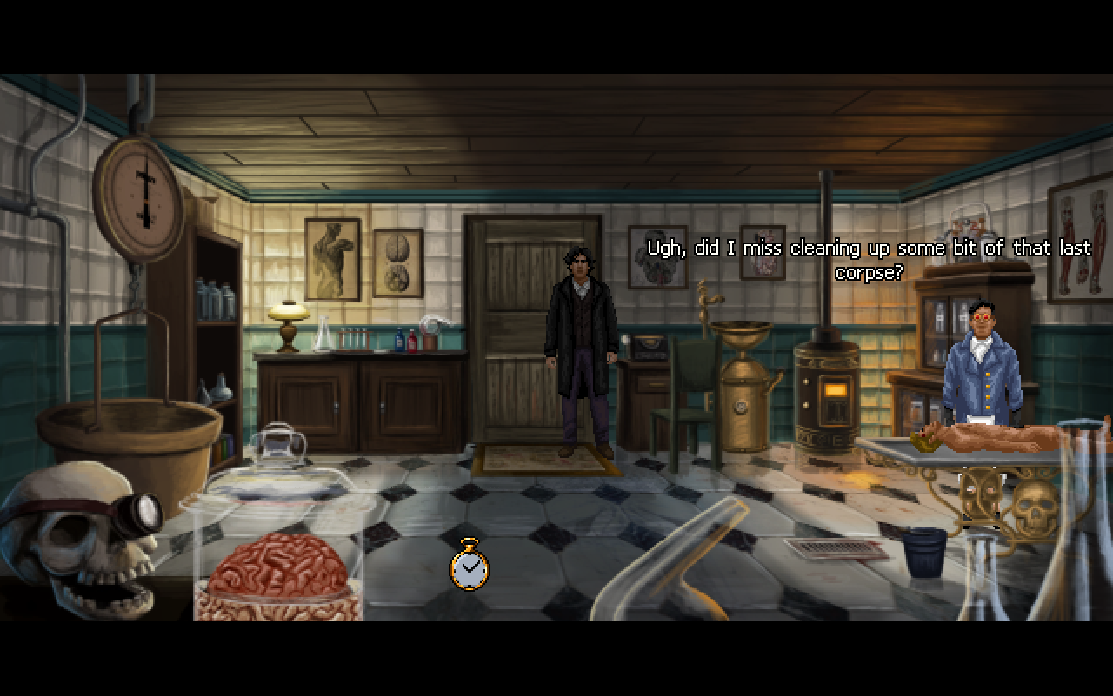 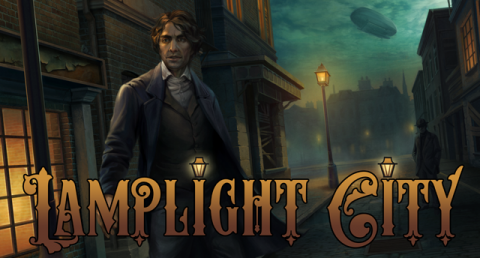 Shortly after Dave Gilbert released Unavowed, arguably one of Wadjet Eye’s best games in their growing history, studio contributor Francisco González released his own title under his own studio, Grundislav Games. Keep in mind he’s one of the major creative leads behind Shardlight, arguably Wadjet Eye’s best game alongside Technobabylon, not to mention the underappreciated A Golden Wake. González has been living under the collective shadows of Wadjet Eye and artist friend Ben Chandler for awhile now, but Lamplight City is definitely going to change all of that. With this game, González finally cements his own personal styles in art and game design, and the end result is a refreshing new point and click that doesn’t so much expand on what the genre can do as completely re-frame it through the influences of detective games. 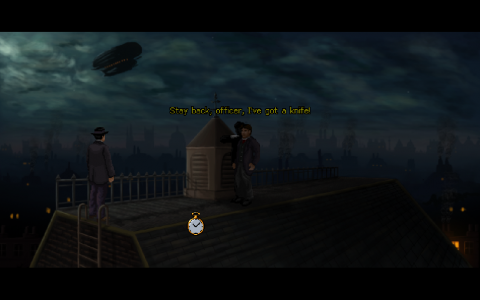 You play as Miles Fordham, one of the most decorated detectives on the force in a steampunk 1840s American New England city New Bretagne. He and his partner Bill are out to handle a small time robbery case at a flower shop in the slum area of Cholmondeley (aka “The Chum”), but things end up going bad as Bill dies during a confrontation with the perp (either by being pushed off a roof by the perp or accidentally shot by Miles). A month passes as we find Miles a mess, addicted to soporific and hearing Bill in his head, begging him to go find the flower shop burglar and get some closure for the both of them. From here, the game follows Miles as he solves cases under the nose of the police department and struggle with new addictions to drown out Bill’s voice, straining his marriage, the ultimate outcome depending on your choices and your ability to solve cases.

Lamplight City shares a lot of structure with A Golden Wake, both following incredibly talented men with crippling personal problems and their struggles with dealing with them. The plot is also structured in a similar manner, showing us a day in the life and cutting ahead a significant amount of time, though it feels more natural here through the case structure. Miles isn’t doing much in between jumps other than languishing, the cases acting as his moments of actions and self-definition. It helps that the these scenarios have the player more personally involved by actively solving mysteries instead of experiencing a real world history tour. 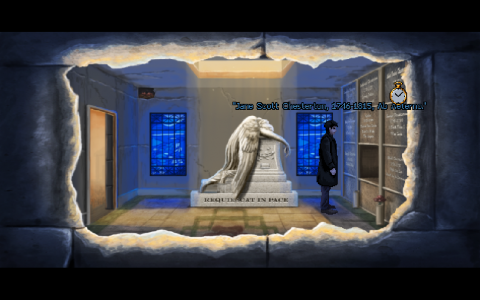 Miles central struggle manages to be a powerful to boot, a rare exploration in very real emotional turmoil games often don’t know how to grapple with. Where Dave Gilbert excels at character creating characters with personality and life you want to follow, González manages to create a cast of simple characters that let the central lead bounce off of them to explore their layered and flawed self. It’s a classical literature character arc mixed into familiar pulp and genre writing, like smashing together old stage plays with a detective serial. The addiction theme is even explored in a clever mechanical way, as often some of the choices you get aren’t really choices but a tone shift for a bad choice Miles has already made without your judgment. It inspires frustration in a way that mirrors what it’s like dealing with real people with addictions, a neat narrative trick that removes you from Miles perspective at the right moments for narrative impact.

What sets Lamplight City apart from other point and clicks is how it approaches the investigation set-up. Where Unavowed used an RPG set-up to explore puzzle design through your party members, this game takes a more traditional angle and focuses more heavily on being a detective than we usually see from point and clicks that share the mystery theme. The big change here is that you can actually screw up cases, which can have radical impact on your play-through in unexpected ways. However, solving cases perfectly can unlock new paths or shortcuts in later cases, as the effects of your actions spread throughout the city. On top of this, your deductions end up having rippling impact on Miles’ personal life, his marriage, friendships, and profession career, tied together and all threatening to unravel from his personal weaknesses. It doesn’t create as much replay value as Unavowed, but this does make the gameplay and narrative segments with Miles fit together better. Your ability to observe and your problem solving skills are ultimately the deciding factor in what happens to Miles and the people involved in each of the five cases. It’s not so much a screw over for not finding a single item at the very beginning of the game to solve an ending puzzle, but showing the player’s actions impacting the protagonist and making you want to do better for his sake. 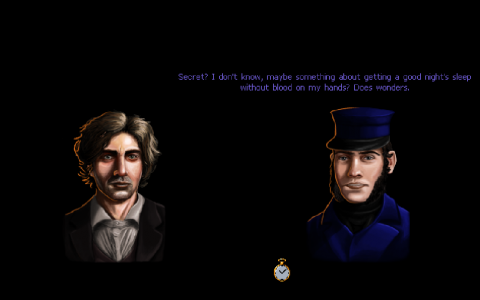 To keep the game from bloating, several systems are streamlined. The big thing is the inventory, which is non-existent. If you have an item on you, it’s solely for a quick use somewhere in the room or set of rooms that’s heavily telegraphed, with the odd exception. Puzzles mostly take place in one screen events, or they’re based around your ability to make sense of information you’ve gathered. So instead of a traditional item inventory for puzzles, you’ll mostly be looking at your case book, which keeps track of your investigation goals (even helpfully not removing goals if there’s still an event yet to trigger in an area), clues, documents, and suspects, ala L.A. Noire. You’ll be checking this a lot, as while part of the aim is to get enough to make someone a viable suspect you can pin as the perp, the main aim is to sift through everything you’ve found to make the most reasonable estimation of who the crime was committed and by who. The case ends when you decide it ends, there is no end state you reach naturally. Once you make the call, you see how things play out and hear of fallout later on. 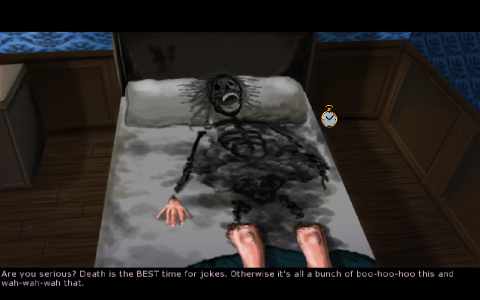 Actually gathering information is pretty painless and even a tad addicting. Lamplight City takes the character question system of Gabriel Knight (even copying Sins of the Fathers‘ character portraits in a black void screen) and simplifies it down to necessary questions and some flavor text, no constant asking to tell me about voodoo or snakes to be found. Exploring areas for important items and information is made way easier with the clear art style, but it still requires an attentive eye for the small details that can completely flip around your perspective on a case. Some areas also disappear from the map after you’ve found everything you need to find in them, cutting out some needless backtracking if you hit a wall in your investigation. Even with all these touches, the game is the meatiest of González’s work, clocking it at roughly ten hours if you take your time to go for a perfect run. It’s also much more involving, as where getting stuck on a puzzle in a traditional point and click is just frustrating, it feels a bit invigorating here because you know there’s a logical solution there waiting to be found, you just have to connect dots you haven’t yet. In other words, you have to be a better detective, managing to capture the investigator formula better than most games in the point and click world.

This is all great, but the insane amount of polish González put in here is what really brings everything together. His artwork in previous games has been lacking a feeling of life and polish Ben Chandler has been rocking for years now, but Lamplight City finally shows us González’s real A-game. His more natural lighting and shadowing result in much more lived in areas, places that don’t feel so much like illustrations as they do photographs or film shots. The less detailed character sprites and portraits also benefit greatly from the animation on display, giving the world a pulp 1800s sci-fi feel to it when mixed with the exaggerated real style. There’s just so much attention to detail in the most unexpected places, the highlight easily being what appears to be a rotoscoped sequence where Miles pulls something out of a sewer drain. The music is less notable if satisfactory, though the credits theme is actually performed with a real choir in a cathedral, resulting in some incredible acoustics. 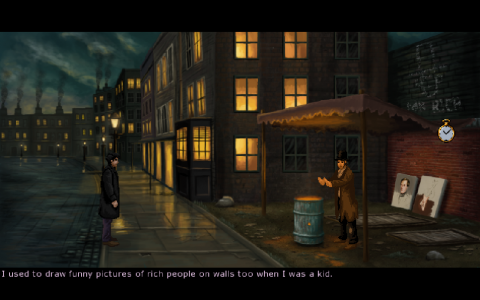 On paper, Lamplight City doesn’t seem like anything particularly fresh or exciting, lacking a particular hook that makes it stand out among the crowd. Actually playing it, however, reveals that the reason to check it out is for sheer masterful design and execution. There are few point and clicks this fun to just play and explore, less focused on getting to the finish line as enjoying the moments in between on the way there (not too unlike Unavowed, funny enough). It does everything either good to great, making one of the tightest, most constantly great games among modern point and click adventure game releases. Originality can go a long way, but sometimes all you need is true mastery of the craft, and that’s here in spades.