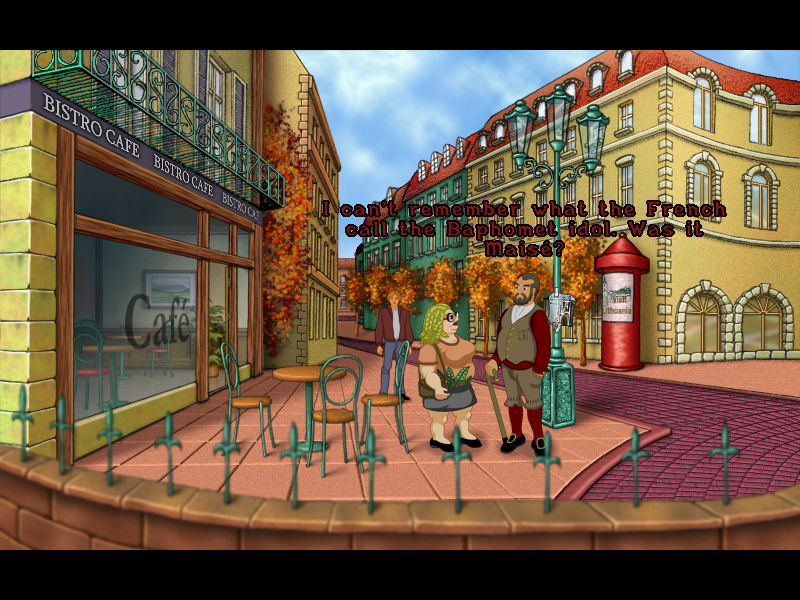 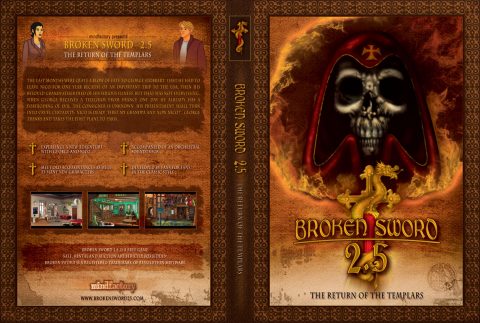 In 2001, a group of German fans who called themselves MindFactory began work on their own Broken Sword game. Between then and the time it was released in 2008, two official Broken Sword games had been released. And yet those seven years of effort paid off in an astounding way. Officially known as Broken Sword 2.5: The Return of the Templars, it utilizes the same 2D art style as the first two games, and thus feels closer to being a “true” Broken Sword game than even its official 3D sequels.

As the title suggests, Broken Sword 2.5 takes place in between Broken Swords 2 and 3. George has left for America once again to tend to his dying grandfather, when he receives a shocking telegraph – Nico Collard is dead! He takes the first jet to Paris and finds her alive, if not particularly well. She’s quite distant, and furthermore, seems to be involved in an assassination attempt on the governor of Paris. Of course, the truth isn’t quite apparent, but it does involve the resurgence of the Templars, naturally. In digging further into their history, George and Nico learn of an ancient connection to a Chinese emperor – and naturally, the two must travel the world to stop another diabolical Templar plot. Along the way, they’ll meet a few familiar faces, including one character from the original Broken Swordthat, by all means, should have been dead.

It’s astounding how professional this game feels. The game actually runs in a higher resolution than the first two Broken Sword games – 800×600 vs 640×480 – which means the graphics are even crisper. Many of the assets needed to be redrawn, or at least touched up. There are plenty of familiar locales, and while the redone artwork isn’t quite as detailed as it was in the first game, everything still looks very nice, and the new locations are just as well illustrated. Even the music, despite missing a live orchestra, sounds fantastic. All of the dialogue is fully voice-acted too, and they even got the original voice actor for the German games to reprise George. The English version has a decent replacement for George (no Rolf Saxon, unfortunately), and Nico… well, Nico’s been played by four different actresses in four different games, so it’s not like they had any real consistency either. It’s also surprising how well written the dialogue is too – it’s quirky and funny, as it should be, it just cements the fact that you probably wouldn’t know it’s a fan game if someone didn’t tell you. 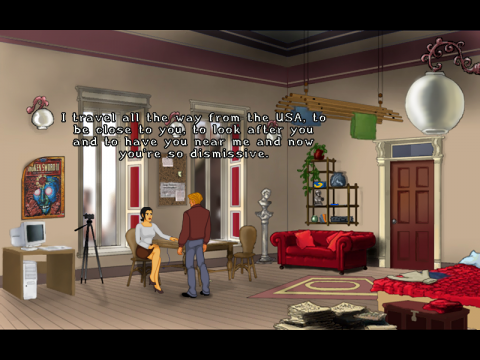 Well, that and the cinemas. Asking for fully animated, hand drawn cutscenes might’ve been a bit much, so we have to do with computer rendered cutscenes, which don’t look great, but are sparse in number. The rest of the stumbling blocks are few, and many are common with the rest of the series. A few of the puzzles involve tiny objects that require lots of pixel hunting, and the plot doesn’t really pick up until near the end, by which point the game’s almost over. The adventure is quite a bit shorter than the other games, and a bit too much takes place in Paris, making it a bit overly familiar (or perhaps, nostalgic) to players of the first game. Still, there are plenty of new locations, and it’s cool to talk to old characters, like the waitress in the cafe, who’s considerably less shaken up.

Broken Sword 2.5 is available for free download on their homepage.