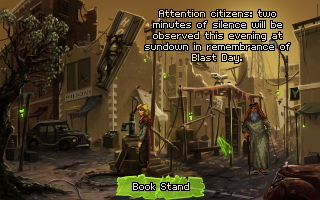 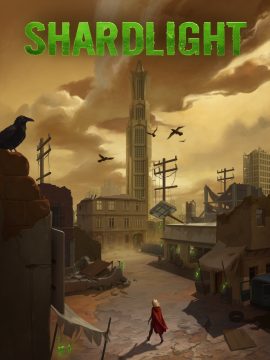 Back in 2012, Wadjet Eye Games and Wormwood Studios released Primordia, a post-apocalypse adventure about machines surviving the world man left behind. In 2016, Wadjet Eye decided to return to the wastelands with a more human story with Shardlight, and it may be one of the best games in their entire library. Unlike Primordia‘s focus on black humor and existentialism, Shardlight is much more grounded and, well, human.

The game follows Amy Wellard, the daughter of a fix-it man whom was born into the world as it was blown apart through the onset of nuclear war caused by resource disagreements (of course). It’s been twenty years since the world changed forever, and Amy has Green Lung, a disease ravaging the remains of the world. She’ll die eventually, but there may be hope as she finds a dying man during a lottery job that promises a way to save her and everyone suffering from the plague. She ends up meeting a rebellion lead by a motivated woman named Danton, but is also tasked by the Aristocracy’s major leader Tiberius to act as a government spy, with payment of vaccine for her success. Wanting mainly to live long enough to fix her dad’s old car, Amy finds herself as the key player in a conflict that will decide humanity’s future.

Primordia and Shardlight are practically night and day as far as themes go. Primordia was focused on ideas of redemption, faith, and sacrifice, but in a more grand sense. It was about the race that took over the planet after the last, how they saw it and what they wished to do to continue. Shardlight, on the other hand, has more in common with the likes of works like Children of Men (which was an inspiration and even gets referenced in one of the late areas), focusing on humanity’s reaction to horrific suffering and the need to keep some semblance of structure. Both are tragic, but Shardlight really gets to you in ways that probably won’t be expected, especially the big final choice the game throws out.

Amy herself is a great lead, very normal and relatable. There’s a little optional scene where you can play jump rope with some kids and sing nursery rhymes, and it just oozes humanity, from the actress’ performance to the contrast with the crumbling world around her. She’s a strong willed girl who wants to help those dear to her, and she gets dealt a horrible hand and tries to get through it. She has moments of confusion and despair along side her celebrations and heated spirit, and it all makes her come off as one of the most fleshed out protagonists in Wadjet Eye’s history. She works especially well in the horrific wastelands, a living being among the dead and decay trying to continue on and support those who need it. She represents hope in a world where hope has long passed, and she’s offset with a mess of characters that all do the same in more twisted ways, including a cult that worships death itself and the violent revolutionaries.

It’s hard not to emphasize with every character on some level, even the manipulative Tiberius. Reasoning and motivations for everyone’s actions, from helping to hurting, makes sense on some level, and nobody is trying to do more harm to the world or justify their own ego. When the final choice kicks in, it’s almost gut churning because the moral dilemma really has no easy answer. The pace is just right and moves every major beat and turn right when it needs to engage you in the story a bit more, and it builds a rich world filled with memorable characters and a truly horrible beauty.

There’s life in every scene, even in dead landscapes, and some absolutely fantastic sprite work for the group. There’s one part that tries making a reference to a painting of the River Styx that’s especially haunting, not to mention the salt lands. Character designs have a cool neo-colonialism theme going on, used especially well with Tiberius’ gasmask designed to look like the face of a Greek god. The music fits in well too, going for strong mood pieces that waver in and out of the background. The world-building is fantastic, making use of public announcements via speaker and a few old books you can read (and the art book has a pretty nifty bit of foreshadowing). There’s a feeling that this place existed, with tons of little details like that spread around.

Even the puzzles are especially strong. They’re all rather logical, and the hardest puzzle is early on and really makes you feel good for figuring out. The story never stalls for obnoxious brain teasers, though they feel too simple at times. Few moments really test your brain after awhile, and a few solutions are reused, mainly making a hookshot. That said, it’s better than typical moon logic.

It’s honestly difficult too find too much fault with the game. It’s not particularly innovative or fresh, especially since Wadjet Eye already did a post-apocalypse game, but it’s just damn good and well designed. It never feels bloated and moves at just the right speed, leaving you with the want for more. Maybe some better brain puzzlers would have been nice in the late game, but then it may have been a tad too much on the march to the climax, sort of like Technobabylon‘s issues with needing to get all its cast in a certain area for the finale in an overly drawn out way. This is a must play for all point and click fans, but do be warned this is also one of the most violent titles Wadjet Eye has ever done. Don’t put Amy in a corner, baby.