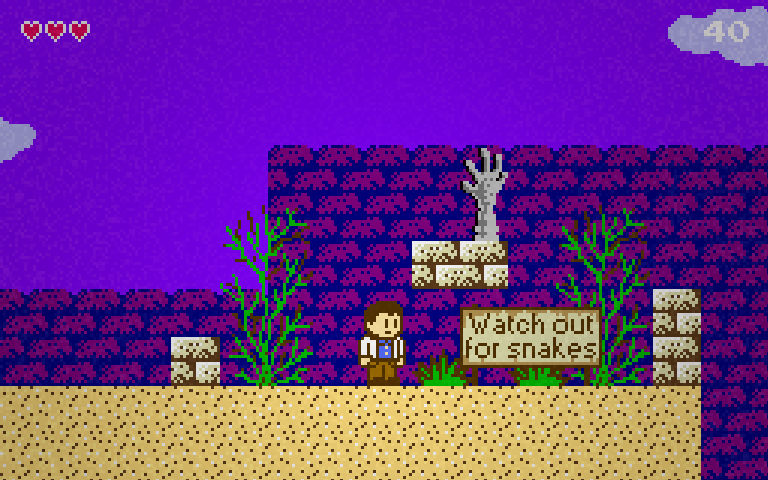 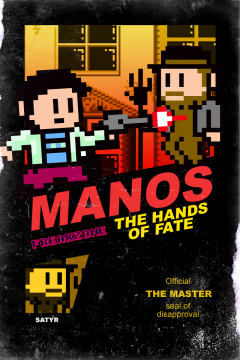 In 1966, a Texan insurance and fertilizer salesman filmed one of the worst movies ever made. This botch of cinema laid dormant from the public’s mind until it was unearthed and subjugated to Joel and his bots during the 4th season of the TV series Mystery Science Theater 3000, where its cult status boomed. Naturally, being created around 30 years before the release of the NES, no 8-bit tie-in cartridge was ever made, but Sam Beddoes and co. at FreakZone crafted a “what-if” retro spoof of what a classic platformer spin on the film would have surmounted.

Manos is loosely based on the threadbare plot of the source material. As the movie consists mostly of dead air, driving, and women wrestling in gowns to the tune of muted jazz, several liberties and nods and creatures from other B-movie schlock is added in to bolster the action. The game places you in the role of Michael, father of a small family that got lost searching for a lodge and stumbles upon a remote house of horrors run by The Master. What was originally a small ranch abode in the film is expanded in the game into a Castlevania-sized array of catacombs and the surrounding desert countryside. Each is littered with cameos from various MST3K-mocked movies, including killer shrews, screaming skulls, hobgoblins, as well as bosses lifted from infamously terrible flicks like The Giant Claw and Robot Monster. Armed with his trusty revolver, Mike’s only powerups are an easily lost 3-way spread shotgun and several hands of fate hidden away that boosts his max health and go towards earning the good ending. After all, the only stage obstacle worthy enough to be picked from the film itself is the random couple making out in a car. 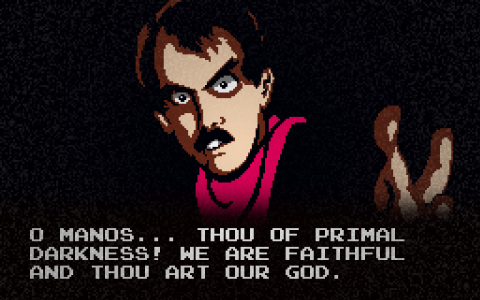 The fundamental flaw of Manos is that it mimics an NES knock-off too well. All the issues with unpolished titles of the era are mirrored here: slippery controls, cheap hits, bad enemy placement, and more. The graphics also don’t rise above early NES game appeal, nestled into the blocky tilesets from 1986-87 releases. However, the music does an admirable job replicating the film’s meager score into 8-bit sound channels. The playthrough is also very short, being over at a runtime quicker than the film it’s based on — which for many is a perk. Difficulty levels are available, but they only increase or decrease the amount of powerups and health packs.

For a game created on a dare, Manos is a fair, middle-of-the-road 8-bit showcase that is made for those that are MST3K fans or fans of B & lower-grade films in general, as the references within are handcrafted for their ilk. It’s a serviceable, very by-the-numbers and rather nonsensical, typical for many titles in the genre. The development by FreakZone is laudable as a test run for other licensed tough throwback platformers they would create like their Angry Video Game Nerd titles (a web series Sam Beddoes states was a huge inspiration for Manos). A “Director’s Cut” of the game was released in 2015, which upgrades the presentation with better sprites and pixel cutscenes, though thankfully the obscuring film grain effect can be switched off. The update also includes a new graveyard stage based off of Plan 9 From Outer Space along with an unlockable playable fan-fave Torgo Mode.