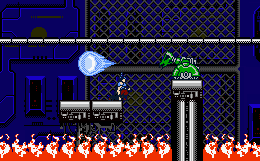 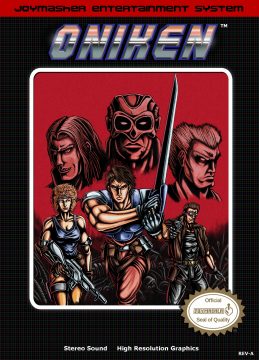 You like Ninja Gaiden on the NES? Vice: Project Doom? Shadow of the Ninja? All of them? Well, then Oniken is just the retro throwback indie game for you, as it’s a huge, perfumed love letter to those titles. Developed by Joymasher, some cool dudes from Brazil, it channels just about everything there is to love (or hate) about good old 8-bit sidescrolling action platformers. 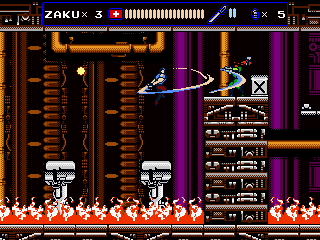 It is the year 20XX (of course), and the modern super ninja mercenary Zaku is hired by the military to take out the “Oniken,” a terrorist ring that is about to take over the world. (Oddly, their leader is not Japanese at all, making one wonder why the organization is named Japanese for “Demon Sword”, but this is not the time for heavy thoughts.) Supported by the two sidekicks Jenny and Rico – who, like Ninja Gaiden‘s Irene and Robert only show up in the story, but never in the actual game action – Zaku takes on the Oniken gang, with their army of cyborgs and rogue ninjas, but is saving the world his only motive? Oniken tells its simple story in cinematic cutscenes of the kind many know from Ninja Gaiden, but their pacing and style is actually more similar to Vice: Project Doom. Just as in those classics, dynamics are created through cuts, the shifting around of sprites and palette rotations, “actual” animation is barely existent. If you want to cut right to the action, they are all skippable; not so the handful of in-engine cutscenes, though.

Despite being the toughest badass there is, Zaku’s skills are actually very basic as far as video game heroes go. He can jump, slash enemy soldiers and machines with his huge sword, throw grenades and grapple along ledges. Finally, there are boxes lying around that may contain, besides extra grenades and health refills, sword upgrades that greatly extend the weapon’s range. Sacrificing a stock of those allows Zaku to turn invincible for a short time. That’s about it, no fancy extra weapon system, slide attacks, wall or double jumps. Keeping it simple works well for Oniken, though, as it allows the game to create its challenges without relying on gimmicks or worrying too much about over-or-underusing its mechanics. 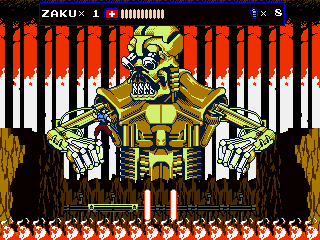 And challenge, there is plenty. One of the key definitions for NES style action games to the developer was “Nintendo hard.” Oniken is forthcoming enough to allow to select all stages directly once they’ve been reached once, but outside of this convenience, the game shows its wholly uncompromising side. You get a total of three lives per stage, and when you run out, it’s back to the beginning, no questions asked. Stages always consist of at least two sections with a boss each in between and at the end, so it’s always quite a trip to the next permanent save point. There’s not even an easy introductory stage to get accustomed to the mechanics – Oniken throws you right into the mess, so sufficient experience with the genre is almost required.

But Oniken also reveals the ugly face of old school difficulty. There are no respawn points before bosses, making it impossible to focus on practicing them. This gets especially frustrating with later bosses, who can kill Zaku instantly by pushing him down a pit. Yes, the “recoil” stun that accounted for thousands of deaths in Castlevania and Ninja Gaiden is back to wreak havoc on your nerves. Thus one often ends up repeating sections that have long become routine dozens of times, just to get back to the really hard parts again. The biggest blunder are the randomized item drops, though. Getting enough sword upgrades for invincibility right before the boss can render an originally excruciatingly hard fight pointlessly easy. 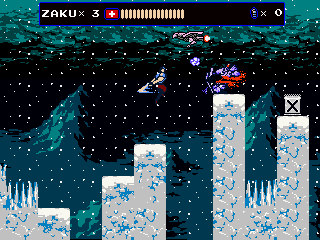 Every once in a while, Zaku gets on a hoverbike for fast-paced autoscrolling shooter stages, which nonetheless still put a lot of focus on jumping over obstacles. When on the bike, grenades are thrown backwards to give a means to attack enemies that approach from behind, but it takes time to get accustomed to. Especially later in the game it is often required to fire away while jumping, which can get very straining on the hands, even more so when playing with a keyboard. They’re not the most difficult stages in the game, but certainly among the most annoying. At least the bike accounts for an exciting chase scene with a cyborg polar bear, can’t say you see that every other day.

Despite the many high obstacles Oniken puts in the player’s way, it eventually turns out a rather short ride. NES veterans will likely clear the six regular stages within a few days. An online scoreboard is supposed to raise the replay value, but it’s a bit bothersome to sign up for it. Scores are saved for each stage individually and then accumulated to the overall score, so one can concentrate one’s efforts when trying to improve. After clearing the main story, boss rush mode awaits to separate the wheat from the chaff. It’s played survival-style, with the remaining health carrying over from battle to battle, and a healing item thrown in only every couple fights. No extra lives, no special weapons – now is the time to bite your controller. 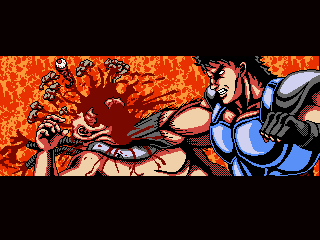 Even after its release, Oniken received quite a few revisions. Some bosses had been quite glitchy in the original release but a patch came out just a few days later which seems to resolve at least that problem. One especially mean boss fight was made easier by covering up the fiery pit that covered the entire bottom of the screen with just mildly hazardous spikes. Some might also have been thrown off by the initial lack of customization options for the controls, especially since the jump and attack buttons are aligned contrary to what many have been conditioned to in the NES age. Later updates also brought some cosmetic changes, like a few improved enemy sprites and repeated backgrounds replaced by unique ones.

The most significant addition, however, was the new stage 7, which follows Jenny in her hostage rescue mission. This episode plays a lot like Contra, as Jenny fights with a gun which can be fired in all eight directions and repurposed as a grenade launcher. There are also Mega Man inspired elements, like the famous vanishing platforms. Her stage is pretty long – the third and last segment almost too long – and contains three boss fights against a giant metal skull. Unfortunately there is no special reward for clearing it, not even a new cutscene. If the game wasn’t hard enough already, the Steam version also adds a hardcore mode, which starts Zaku with a single life, does not replenish health at the beginning of sub-stages and can only be played in one sitting. 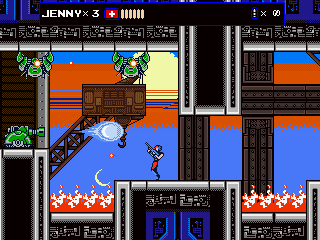 Oniken sets out to evoke NES feeling with its presentation, too, although it cheats a lot while doing so. The color palette seems about all right, but the larger bosses would make the Super NES proud. The occasional parallax scrolling is also more advanced than the 8-bit hardware would allow for. The screen resolution is thankfully also oriented towards modern non-widescreen displays, and of course we’re spared the NES-typical sprite flickering. While those are minor details the most noticeable difference from the classics is a change in tone: human enemies die in a gory mess rather than just bursting into flames like the machines, and there are some very graphic cutscene deaths of the main antagonists. The lack of Nintendo brand censorship also extends to the script, which contains occasional strong (yet safe-for-work) language. There’s also something in general about the way the sentences are written that just doesn’t feel true to the NES era. Having to fit the English sentences into the space of a much more economic Japanese original gave games like Ninja Gaiden an unique feel of brevity and urgency, whereas Oniken feels a wee bit more verbose.

The soundtrack gives an even more faithful impression than the graphics, although additional audio channels betray the music’s recent origins as well. Most of the songs are above average to very good, only the most frequently heard boss music is a bit crappy. The purchase of Oniken also includes the music as MP3 download, alongside some pieces of concept art.

Oniken is a formidable love letter to classic 8-bit action platformers, and the perfect remedy who misses the fun, the challenge, but also the pain inflicted by Ninja Gaiden before it turned 3D or Castlevania before the Metroid influence hijacked the series. Every sprite, every level, every bastardly placed pit serves to testify the amount of dedication that went into this project. On the other hand that also means that it inherits some of their flaws as well, and players who despair at any of the aforementioned influences won’t be much happier with this one either. Oniken offers no new solutions, no great innovations, but just a very good variation on a mostly forgotten formula. The game is pretty cheap to get, and a demo is freely available as well, so for fans of the genre there is no reason to not at least give it a try.