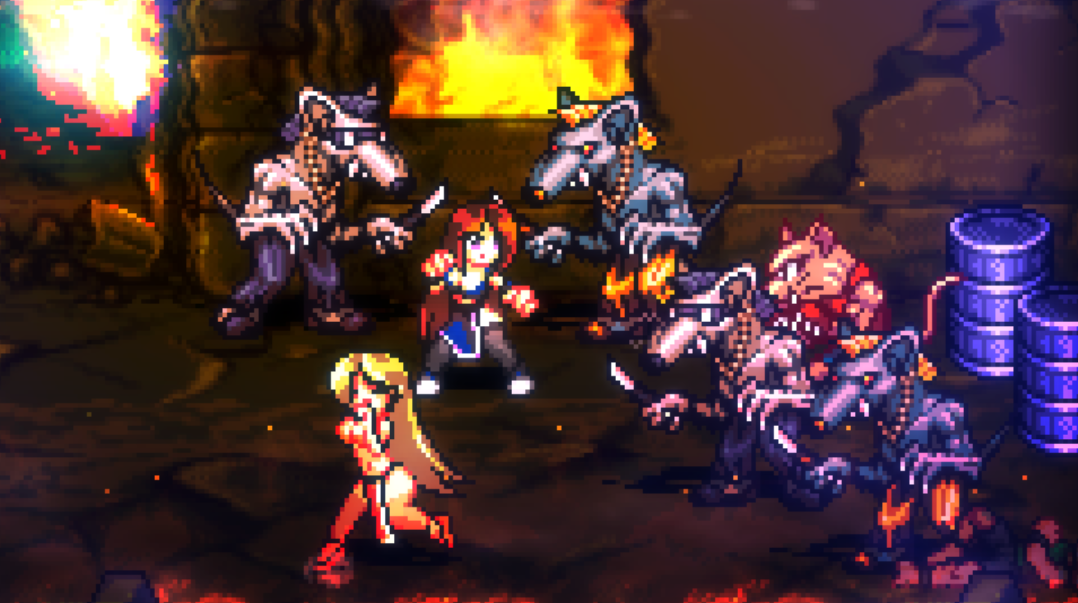 The success of Castle Crashers in 2008 spurred a small resurrection of the arcade beat-em-up genre, but few pay such tribute to the glory days of the 90s as Seba Games Dev’s Fight ‘n Rage. The most obvious homage is the title, an amalgamation of Final Fight and Streets of Rage, but the ethos goes far beyond just the title. 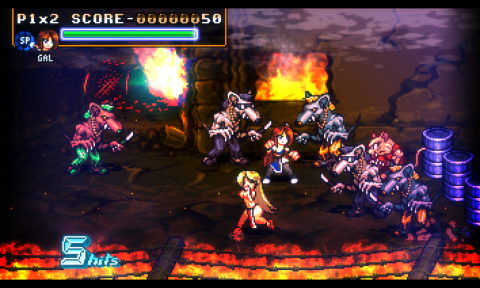 The game takes in a post-apocalyptic future, where humans and animal-mutants live together in disharmony. There are three playable characters: two human and one mutant, while nearly all of the enemies are anthropomorphic animals (save for a few cutesy women). The game offers three player simultaneous play, though local only. 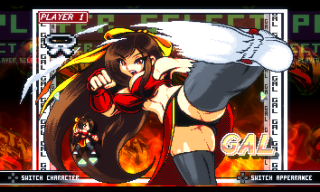 The agile fighter, and clear center of the game’s sex appeal. Her name is obviously meant to be just a female take on Guy. 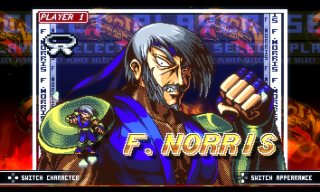 Although F. Norris borrows Guy’s basic design (including his running animation), he’s actually the balanced character, with a good center between speed and strength, though his endurance is relatively low. 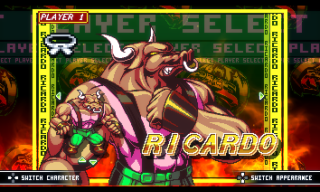 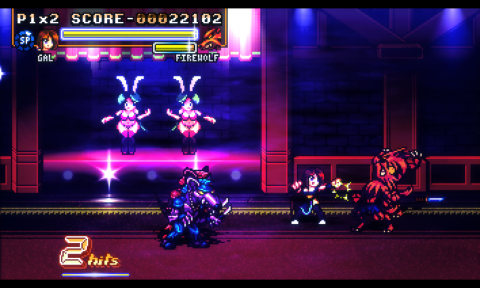 The characters are presented in squashed, slightly deformed manner, somewhat similar to Paul Robertson’s work on Scott Pilgrim (and especially noticeable in the extreme bounciness of the women) but still has its own distinct style. And in contrast to the cutesiness of the women, this is a dark, dark game, if not one that’s particularly gory.

The fighting system might seem simple – there are just three buttons, to attack, jump and use a special move – but there’s a remarkable amount of depth that lies beneath this. There are various dash and jumping movies, and three different types of special attacks, depending on whether you’re walking, running, or jumping. There’s a special meter that dictates when you use your special attack, which quickly recharges on its own, though you can also use them whenever you’d like at the expense of some health. Most of this should be familiar to anyone who’s played Streets of Rage 3. Also, during a combo, you can also hold Up to bash your opponent(s) forward, or Down to toss them backward. You can also parry a la Street Fighter III by hitting towards an attack about to hit you, which also allows the free use of a special attack. Each of the three characters has a single unique hidden move too. If you manage to pummel an enemy with strong enough attacks, you’ll also make them explode! 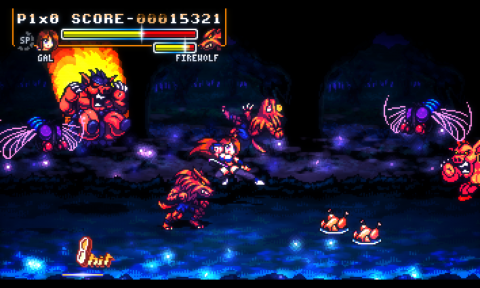 While the moveset isn’t gigantic, it’s put to fantastic use due to the tight combo system and enemy design. Each foe has its own limited type of attacks and behaviors (with strength levels dictated by color, of course), but each can be exploited if you know how to approach and dodge them. Much of it simply involves stunning enemies, then trying to keep a combo going on as long as possible, thanks to the ease in which you can juggle them. At first, this is fairly simple, as the enemies aren’t too difficult or smart. But the difficulty ramps up significantly in the back half, where it tosses you cats (dressed up as M. Bison from Street Fighter II, complete with his slide move), Muay Thai birds (inspired by Sagat), kung fu monkeys (complete with track suit homage to Bruce Lee), and, the worst of them, Doberman Pinschers dressed like bouncers, who move with both incredible speed and strength. Dealing with these on a one-by-one basis isn’t difficult, but when you’re facing a dozen enemies (or more, in a few cases) simultaneously, using your crowd control moves to isolate all of the enemies is essential, not only to effectively attack but also actually see what’s going on amidst the crowd of bad guys.

Additionally, there’s a fairly wide distinction between the three player characters. Primarily, Gal may be really fast, but she’s also really weak. In the right hands, she can create near infinite combos in certain situations, but simultaneously, it also feels like you need to do much more work to get the same damage output as F. Norris (though if you’re good at it, that in itself is quite gratifying). This is especially an issue with the boss fights, which makes them feel like damage sponges when you’re playing as her. The game doesn’t telegraph this, but she’s much more of an expert level fighter than the other two. 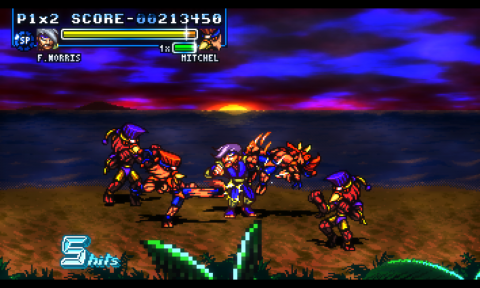 Indeed, there’s actually a lot about Fight n’ Rage that seems hidden, or at least not well explained. For example, you might overlook the arrow that signifies that you can actually run away from the opening stage, to a completely different branch set of levels. And at the end of the first level, the boss takes a hostage, and if you directly attack, she’ll be killed. It might seem like the game is being needlessly cruel, but if you managed to sneak in the sword from the previous scene, you can chuck it at the boss to save her. (The command isn’t listed in the tutorial, though it’s the same if you’ve played Streets of Rage: Jump and Attack buttons simultaneously). In doing so, you’ll go down an alternate set of levels.

Various choices like these will send you through different areas, though many later on simply revolve around entering (or not entering) certain doors. Depending on the path you take, you can get one of eight different endings. And then there are different endings for each character, and variations for when playing with multiple players, for a total of over 50. So to be sure, there’s a ton of content here, orders of magnitude more than any classic beat-em-up. In providing so much content, it also sidesteps the issue of indie beat-em-ups having experience and skill building systems. These aren’t inherently problems, but they did cause balance issues in most of the games that used them, and free of such inhibitions, Fight n’ Rage is more strongly balanced towards promoting skill over grinding. 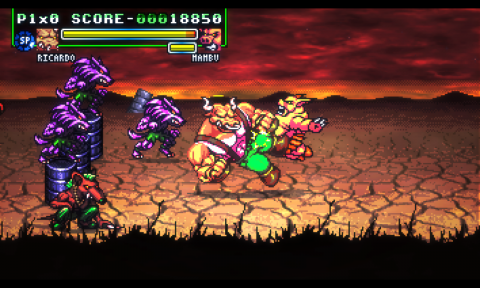 That said, there’s a lot of stuff to unlock, including nearly every enemy characters for use in the one-on-one battle mode, plus extra colors and costume variations for the main ones, and some extra modes. But actually unlocking them takes tons and tons of coins (earn by translating points earned during the main game). And since they’re just extras, they barely have any special moves of their own, so they’re not much fun to play as. The amount of time necessarily to unlock everything just doesn’t correlate to how much of a reward you get.

Fight n’ Rage is fairly long. It changes on the route, but a full playthrough takes about forty five minutes, and that’s not including time spent replaying areas if you die. (Thankfully, continues are unlimited.) That’s a little on the long side by itself for an arcade beat-em-up, but the game also doesn’t save any of your progress if you quit, meaning you need to start over from scratch every time. That’s just too inconvenient for a title that expects you to beat the game at least 50 times to get everything. 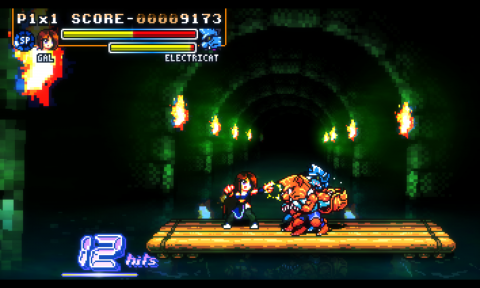 Plus, by nature, the game does get fairly repetitive, even with all of the level branches and enemy types. Most of the stages are typical flat planes, though there are surfing and motorcycle stages, and a requisite elevator scene, as found in nearly every 90s beat-em-up. But then again, the game’s worst stage is the one that changes things up by setting it on top of a raft. It looks cool, using scaling attacks as the raft slowly floats through the sewers in 3D, before letting out into open water. But this particular area also has tons of flying enemies, including the boss, and it’s far too easy to find yourself leaping off the edges.

Visually, the game is excellent, with a whole ton of excellent spritework, though you’ll definitely need to accept the aggressive boob jiggling and panty shots. It does go a little overboard on the flashy effects, so it’s not exactly authentic to 90s arcade hardware (though not in a bad way). By default, it actually starts off using graphical filters to replicate an arcade monitor, that are a bit overdone in the romantic way that people seem remember arcade cabinets looking like rather than how they actually were. It does look snazzy, though they can be disabled.

Most of the game was designed and drawn by Sebastian Garcia, though the soundtrack is provided by Gonzalo Varela. Much of it is hard rock, with some tracks bringing in other types of instrumentation, though the best tracks are easily the ones that recalls the glory days of the Guilty Gear soundtracks. Owing to the large size of the game, there’s a ton of music too, with the OST offering 44 tracks.

It definitely demands a lot from the player, but Fight N’ Rage is not only one the best modern beat-em-ups, but thanks to the fantastic combat system and huge amounts of replayability, is substantially better than vast majority of the games it pays tribute to. Plus, it looks cool and it sounds great, making it essential for fans of the genre.