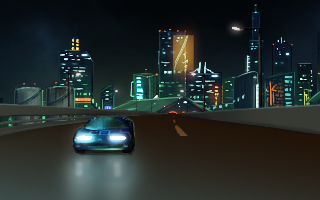 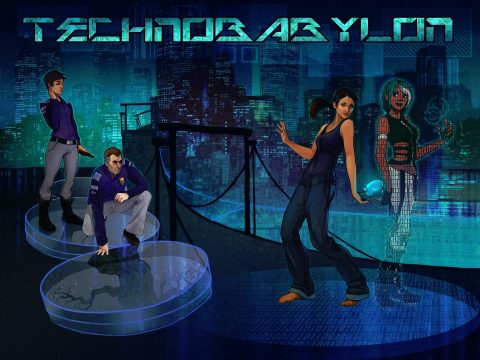 Back in 2010, a small indie group called Technocrat released three episodes of a planned ten episode game series called Technobabylon, a cyberpunk thriller of a point and click that took things back to the old school sensibilities. Then, the project silently disappeared, as the team went on to make games like “Nancy the Happy Whore and the Perfidious Petrol Station” (yes, really, and it’s apparently not that dirty). Not where most would put their priorities, but whatever. Come 2015, the game finally got a full and proper release with the help of Wadjet Eye Games, the creators of the Blackwell series and countless other adventure game gems from the past few years. All ten episodes, the three finish and seven planned (with added content in the second episode), were finished and given a new coat of paint by Wadjet Eye’s talented art team (aka Ben Chandler working on Technocrat’s 3D models and making masterworks), then compiled together into one full title, making it one of the largest games in the studio’s entire library up to that date (if not THE largest). It took about four years, but the wait was certainly worth it. It was the big hit Technocrat needed, but as far as the title weighs on Wadjet Eye’s output, it came up with a few issues. 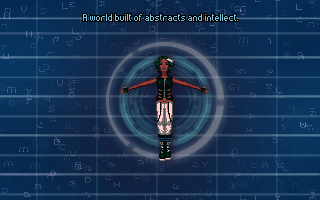 The game’s story proper follows three main characters in the cyberpunk city of Newton. The first character is Latha Sesame, a junkie of Trance, a sort of internet of the future that loads itself directly in the user’s brain. Her normal day trancing goes wrong when she’s locked up in her home by faulty tech, then nearly killed when a bomb goes off one apartment under her, just as she’s managing to escape. Her story intertwines with the stories of Charlie Regis and Max Lao, two members of the CEL. They work as investigators for the city and are on the track of a dangerous mindjacker that has been killing hundreds of people across the city. Things become complicated as Regis finds himself being blackmailed by an unknown person, and things quickly start spiraling out of control and his past starts catching up with him. Among all this is Central, the world’s greatest AI that runs Newton, and the center of all the conflict that’s occurring. 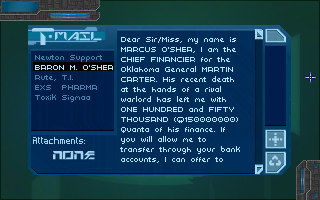 It’s hard not to see why Wadjet Eye took a liking to the project. It’s very much in their familiar wheel house of mystery focused thrillers. It shares a lot with Resonance in particular, even including themes of technology’s dangerous evolution and man’s involvement in guiding it. They both even start with murder mysteries and explosions that force its characters out of their comfort zones. They brought a lot to the project, mainly in their technical know how and addition of voice acting, but the project is still very much Technocrat’s, much like Resonance was still very much a xii title. There is overlap with Wadjet Eye’s design sensibilities, mainly everything borrowed from the old school adventure game design style, but there’s also a lot of elements here that are strictly and completely added from the game’s original creators. 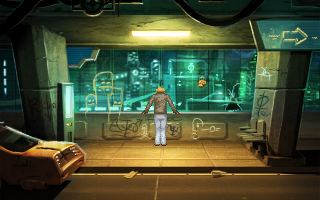 One major difference is how the game divides itself into segments. Unlike other Wadjet titles, which give you a map of areas to explore, every chapter of Technobabylon is its own beast. You’re given a set few screens to explore and interact with, where a surprisingly complex series of puzzles are set-up. The tired old strategy of using everything on everything doesn’t really work that well here, as the item selection in most every area is very limited. Instead, most puzzles revolve around picking the most logical course of action in a given situation, a more new age style of design. The trick given here is that several of these puzzles require understanding how to best use unfamiliar technology and experimenting with their uses. Chapter three introduces a really fun puzzle involving switching around an android’s brain to get information, switching out its base function, personality, and memories to eventually find the right combination that gets it to spill the beans. It’s still a logical solution, but it forces you to think with new rules in mind in a believable way. 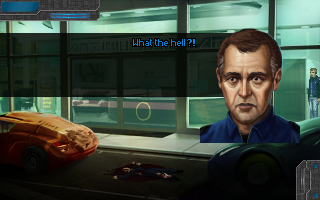 All three characters also play a bit differently in their respective parts. Latha is useless in the real world, but she’s an experienced user of the Trance and has a lot of puzzles based around affect things in the real world to better benefit her in the trance world, like sabotaging a rival gamer. Regis, being an investigator, has to talk a few people to get what he needs, and also ends up in a lot of harsh situations where he has to figure out ways to stay out of sight or make take downs. Lao’s few sections sort of breed the two styles together, though she doesn’t get nearly as much limelight. Her one solo chapter is a slog if you don’t know exactly what to do. Regis gets the most exciting segments, but Latha gets some of the best puzzles of the bunch, especially in the trance den segment. She plays out in a more traditional way than the others. 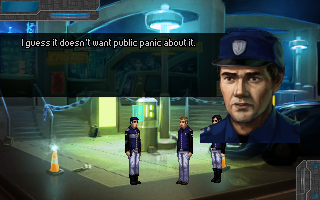 This keeps the pacing in each chapter lively. You get a chance to play everything a bit differently every hour or so, keeping things from getting stale. Every character also reacts very differently to events and people, with Regis’ old man wisdom and frustration matched well with Latha’s snark and love of technology. They’re all also very likable and relatable in some way, and if you can’t relate to one, they’re all so different that odds are good that someone will stick. The supporting cast also gets some great personalities and fun lines as well, especially the people you meet during the restaurant chapter. 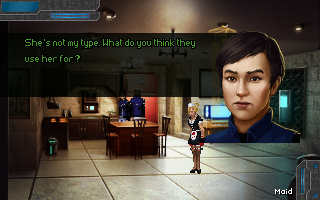 It’s the world itself that feels like the real major character, thanks heavily to Wadjet Eye’s assistance. This is simply one of the most beautiful and technically impressive games in their library, with exquisitely detailed back drops and areas. So many moving do-dads and flashing lights litter Newton and give it a real sense of life, and the game isn’t afraid to show off what it can do with set pieces, like the first time you enter “Nuke ‘Em” and see an atomic bomb go off. And that’s just a minor event in the game. The world of Technobabylon is lived it and realized in the styles of all sorts of cyberpunk classics. The oppressively sleek look of Blade Runner, the harsh grime of Akira, and even the hopeful and idealized trappings of 50s era sci-fi. It’s all here in some form, mashed with all sorts of little cultural touches from different countries and regions. This also mashes well with the incredibly diverse cast, as the city of Newton has become a sort of center for all the world. There’s even a lot of additions to the lore through news posts, giving you a look into the politics of this world. Sure, knowing about an attempt to change time measurement to a system based in ten seems pointless, but it says a lot about how much logic and science has become so important to the world. 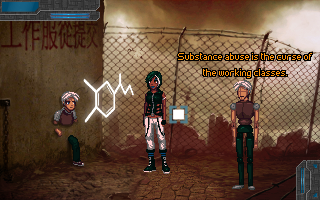 Sadly, unlike Resonance, Technobabylon lacks a good twist to end its tale. Once the flashbacks with Regis’ wife start, it becomes very clear on where the story is headed and what the importance of all three characters are, not to mention the actual bad guys. There’s only one real direction this sort of story can go after all the revelations it makes, and it works great for creating a solid, emotional end, but it comes at the cost of any real surprise, which is pretty important for a game so heavily focused on mystery. The one big twist in the story isn’t made initially clear until you read the voice credits, butt it doesn’t significantly change the context of the story too much. And while the game is pretty damn long at around eight to ten hours, it doesn’t translate to better quality. 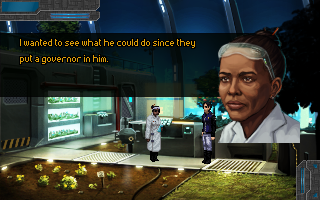 A lot of the puzzles aren’t really brain twisters so much as just going through basic logical decision making and using items at the right time, which is not difficult when you have so few options at your disposal. They’re sandwiched between the fun stuff, thankfully, but these moments do bring some disappointment, especially during the last few chapters that are trying to get things wrapped up quickly.

While Technobabylon doesn’t go down a real classic in Wadjet Eye’s library in terms of story or puzzles, it gets a special place for the sheer look and sound of it. It’s a truly immersive game filled with care and love in every nook of its lore and locations. In the modern day, there were few games released that had quite the same scope as Technobabylon in terms of world building, and in a medium focused heavily on world exploration, that’s a huge advantage.