While shoot-em-ups were king in the late ‘80s, the popularity of Street Fighter II caused a shift towards fighting games. In order to compete with the SNES and Genesis, NEC developed the Arcade Card, a HuCard for the PC Engine that expanded the system RAM to 18 megabits (2.25 MB). This (for the time) humongous amount of extra memory allowed for some excellent ports of assorted Neo Geo games and a few wrestling and fighting games, but not much else. 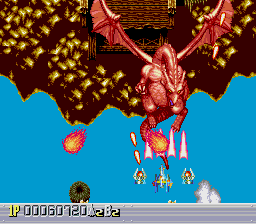 In spite of the genre’s waning mainstream popularity, Hudson commissioned one last final Arcade Card game, one that would act as a showpiece for what the system could do. CAProductions, the developers of Gate of Thunder and Lords of Thunder, were working on a third game in their “Thunder” trilogy, when Hudson looked at the popularity of their Galaxy Fraulein Yuna adventure game series – loosely defined as “cute girls in space” – as well as the success of bishoujo games in general. Mika Akitaka, designer and writer of the Yuna games, was brought onboard to create the character designs, and develop the ultimate PC Engine shooter: Ginga Fukei Densetsu Sapphire (“Galaxy Policewomen Legend Sapphire”). 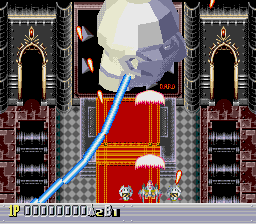 In the future, time travel is commonplace, and has become so deeply integrated into society that flying cars can be used as time machines. As to be expected, not everyone who travels through time has pure intentions, so the shiftier criminals and terrorists have taken to hiding contraband and weapon stockpiles in the past. This leads to the formation of an all-woman team of police officers called the Burning Rabbits, and the story follows them as they chase one particularly nasty enemy through history. 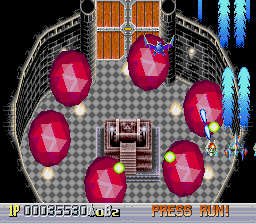 You can pick from four different women – Sapphire White (blue), Charotte Syphon (pink), Helena Evangelin (green), and Jasmin Willoung (violet) – each with easily distinguishable brightly colored hair and a matching ship to go with them. Each ship has a different weapon loadout, as well as movement speed. It’s a little bit strange, considering most other PC Engine shooters let you pick speed on the fly, but works to balance out the weapon strength. For example, Helena’s ship is the strongest, but moves so slowly that it puts her at a significant disadvantage. 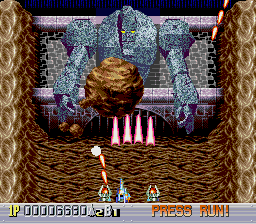 Sapphire‘s weapon system is very similar to any number of other shooters that use the tri-color weapon scheme. While each ship has its own arsenal, they are equipped with different colored gems, making for twelve weapons total, with several power levels. Each color has its own specific weapon – red is typically a wide shot, blue is a straight laser-based weapon, and green does something strange that usually covers the back of your ship. When powered up, two pods also fly next to your ship. If you let go of the fire button for a few seconds, these can be charged up and shot outwards, causing immense damage and giving a score multiplier based on how many enemies are killed. The pods can also absorb enemy fire, but since they only hover at the sides of your ship, and they aren’t very big, their usefulness is limited. Each ship also has a limited number of bombs. 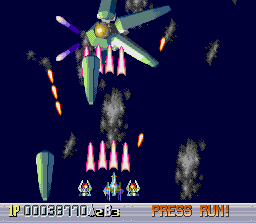 The difficulty is adjustable, but on the default settings, Sapphire isn’t too difficult. Losing a life only powers your weapons down one level, and you can pick up to nine credits on the option screen, which resurrect you where you die. There are a couple of cheap moments where the bosses fire lasers that come out of nowhere, but otherwise, it’s pretty lax as far as shooters go. It also throws extra lives and extra continues at you if you really exploit the scoring system. 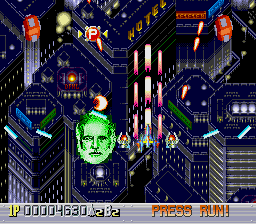 There are five levels, each one taking place during a different time period. The first one takes place in a futuristic Blade Runner-style city, with flames billowing from pyramids and neon signs everywhere. The second is in medieval times, filled with castles, dragons, and enemy space ships disguised as gargoyles. The third takes place in ancient Japan, where you’re assaulted by mythological creatures such as phoenixes and a kirin. The fourth level has an ancient Egyptian theme, where you fight a Sphinx battleship and storm a pyramid. The last level is in space, with the occasional R-Type style monster made of flesh and metal. The stages don’t always scroll straight upwards either, and occasionally have hazardous terrain to avoid, which is somewhat unusual for overhead shooters. Altogether, the game feels rather short – while the time traveling theme allows for diverse landscapes and enemies, there are only three levels that take place in historical settings, so this concept feels underused. 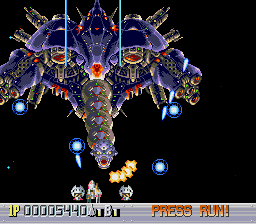 Similarly, while the character designs are attractive and the mechanical designs are fantastic, the pilots barely appear outside of the introduction and ending. There are brief interludes between each stages where they’ll say “roger!” or complain that the enemy has run away yet again, but for a game that was supposed to be loosely associated with the story-heavy Yuna games, it’s a missed opportunity.

Regardless, Sapphire‘s biggest trick was convincing gamers that the game could render polygonal graphics in real time. This was believable, considering many enemies are made of simplistic, boxy polygonal models, with little or no texture maps, accompanied with extremely smooth animation. This isn’t the case though, as these graphics are prerendered sprites that take advantage of the massive RAM of the Arcade card. (For an effect that uses legitimate polygonal graphics combined with 2D sprites, see Mega Man X2 and X3 for the SNES, which required the use of a math co-processor chip.) There are also tons of other cool graphical flourishes, especially the morphing effects, like the digitized holographic faces on the rooftop of the first stage, or the gargoyle that changes into enemy ships in the second. There are even scaling effects used in a few places. The animation of such frivolous details is often stunning. 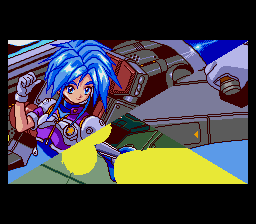 The music, per usual PC Engine redbook standards, is excellent, filled with hard rocking music and high powered synth, that ranks up next to other classics on the system. The soundtrack was produced by T’s Music, and it sounds a lot like their work on Lords of Thunder (the cleaner Sega CD version as opposed to the rawer production of the PC Engine CD tracks). 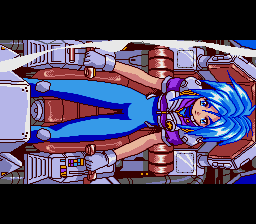 Sapphire is considered one of the holy grails of PC Engine collecting, with incredibly high prices only rivaled by Sylphia, another similarly rare overhead shooter. In many ways, though, its reputation has overshadowed the quality of the game itself, leading to high expectations and some inevitable disappointment. Sapphire is an excellent game, but its strengths lies in its sights and sounds. It’s both a little too easy and a little too short, and despite the large arsenal, there’s nothing particularly innovative about how the game plays. 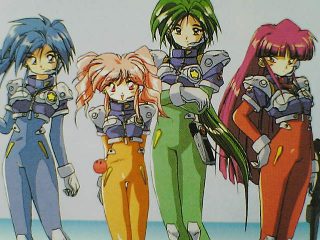 For a long time, due to its price and rarity, Sapphire was for the most part inaccessible to most audiences. In 2008, however, Hudson released Sapphire again in Japan as a part of a compilation on the PSP, called Ginga Ojousama Densetsu Collection. It’s a perfect port and serves as a pretty good shooter as far as PSP shooters go. It also comes with two of the PC Engine CD Galaxy Fraulein Yuna games.