One of a small group of games exclusive to NEC’s ill-fated SuperGrafx system, Madou King Granzort is probably best left untouched. While it has colorful graphics, like other SuperGrafx exclusives it feels very rushed, and is generally boring to play as a result. The SuperGrafx itself is, for all intents and purposes, a PC Engine system with more RAM. 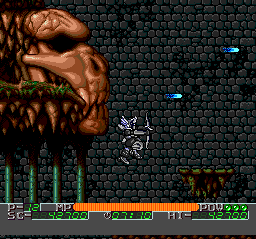 The most notable thing about the game is its resemblance to a certain title from the Hudson’s past. Some gamers will notice that Granzort controls identically to Keith Courage in Alpha Zones on the TurboGrafx-16 and even has very similar character designs, weapons and enemies. In the US, it was even referred to as a direct sequel to Keith Courage in an issue of EGM. 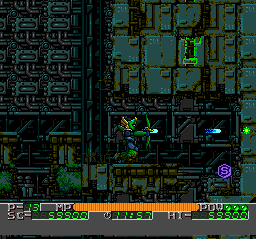 While there isn’t a direct connection between the games themselves, both are licensed tie-ins from two different children’s shows produced by Bandai (and both animated by Sunrise) in 1989. Toyo Ashida did character designs for both franchises, and many of the same staff members from Sunrise worked on both, so the recycled look is not surprising. While Keith Courage‘s source, Mashin Hero Wataru was short lived, it became very popular in Japan, China and Spain. Madou King Granzort was more of a fad, making a big splash and then quickly vanishing.

The premises for both shows are similar, involving a group of kids that summon giant robots to solve their problems, though Mashin Hero Wataru takes things in a more interesting direction with its many quests and tiered challenges the characters must overcome to confront the show’s villains. 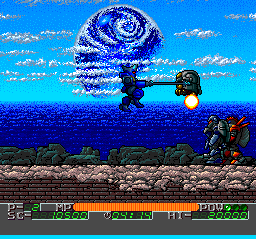 Both shows are comedic in nature, and the goofy tone, along with the tiered level design of the robot sections of Keith Courage are actually pretty accurate to the anime it’s based on. With Granzort, however, the human characters that control the robots are nowhere to be seen on the game’s packaging or in the game itself. This let Mutech prioritize the game’s graphics and large bosses. However, the bosses, while impressive visually, have barely any animation and are generally easy to defeat. They also take far too many hits to defeat given how boring their attacks are. Most of the game’s challenge actually comes from the levels themselves, as you can only take one hit before being sent back to the beginning of the stage (or a halfway checkpoint if you make it far enough).

Either way, despite not being made by Hudson’s regulars like Keith Courage, Granzort developer Mutech took it upon themselves to design the game as an even more dumbed down version of Keith Courage. Since none of the human characters make an appearance in Granzort, you just play as the giant robots. You have three different robots you can switch between at any time, each with different abilities. Since the levels scroll in every direction and have multiple hidden areas and paths, you’d think having multiple characters would make things more interesting. 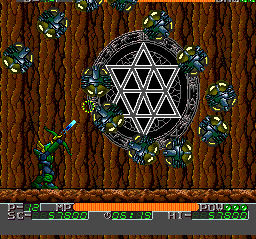 Instead it does just the opposite. The main robot you play as can do nothing but swing a sword in front of it. Another form has a staff with much longer range and can also create a useless force field around itself. The third though, the third one can shoot a rapid firing projectile in almost any direction and can fly. Since any items you pick up are shared between all three, and if any one of them takes a single hit you lose a life, there’s no reason to use anything but the one that can shoot projectiles across the screen and also fly. In addition, you can defeat enemies by jumping on top of them, so the flying character has an even bigger advantage over the other two.

One unfortunate similarity this game has to Keith Courage‘s robot levels is that while the enemies are colorful, there’s very little variety between them. The SuperGrafx’s small library in general failed to impress because they were all made with the mindset of having a strong visual presentation first and foremost, but that presentation is barely an improvement over the best PC Engine games, and no CD games were made to take advantage of the system’s expanded capabilities. SuperGrafx games prices were also ridiculous for the minor improvement, often approaching $110 per game when they were new. 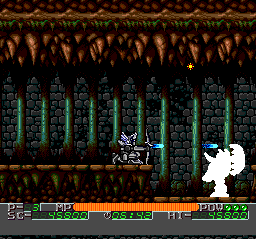 With all that said, for a rushed out licensed game based on a kid’s show, you could do worse than Madou King Granzort. But the simplified structure compared even to Keith Courage in Alpha Zones and boring levels make the relatively high price it often sells for today not really worth it. That doesn’t even factor in actually owning a SuperGraphx system as well. Still, it shows that Mutech was a competent, if unremarkable developer. “Mutech” itself only developed a few games (Granzort and a few visual novels, some based on the manga/anime Yawara!), and many of its members went on to find success on other projects. Its catchy soundtrack and sound design as an example was done by Norihiko Yamanuki, who would later compose a great score for the ambitious Produce RPG, The 7th Saga. The game’s designer, credited as Kyon Kyon would go on to direct both the excellent Super Bomberman for Hudson as well as Super Adventure Island. In general, like with many licensed PC Engine games, Madō King Granzort is important less as a game itself and more as a transitional proving ground for developers who would find more success on bigger projects on the SNES and other newer systems. At the same time, it’s not quite great presentation and very simple structure also serves as a singular statement of everything that was wrong with the design and launch of the SuperGrafx system.