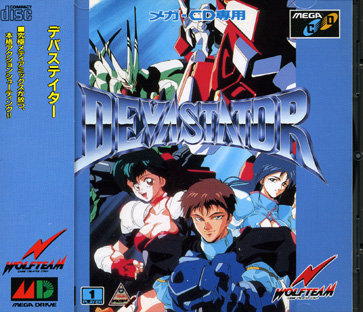 Often with licensed games, developers deviate from their source material to keep their game from being dry. If Capcom, Dreamer’s Guild, and LucasArts have taken liberties with their sources, then Wolf Team has taken an entire Charter (perhaps for the better) with their 1992 Mega CD sidescroller Devastator. The game was released to be a promotional piece for the obscure anime D-1 Devastator. In D-1 Devastator, there exists an alternate dimension which is entered when a vehicle reaches a speed of 300km/h (~185Mph). A civilian bullet-train has found its way into this dimension and is attacked by demonic creatures named Devastators. 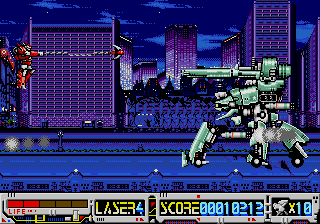 Though this Junji Nishimura anime leaves Wolf Team with little material to begin with, there are a few missed opportunities. In the beginning of each stage your mecha transforms from a car to a robot, but this has no impact on the gameplay. Perhaps, in addition to platformer and shoot-em-up stages, there could have been OutRun-style sections. Maybe there could have been a Top Gun-style minigame with the player dodging obstacles until they achieve a speed of 300km/h. Besides a few enemies resembling those in the anime, they’re exclusive to the game.

Your mecha is equipped with an anker [sic] which reaches halfway across the screen. Your weapon can be powered-up by collecting dropped items left by flashing enemies. The power-ups available are: a spread shot, a double helix laser, and a splitting bomb weapon. These can be stacked to increase the weapon’s power. After being stacked four times, the power-ups only grant bonus points. Flashing enemies also drop health packs and question marks which give extra points. When items are collected, your mecha becomes temporarily invincible. 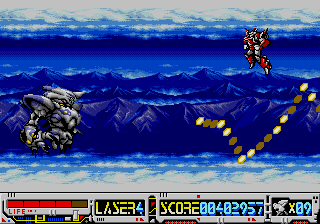 Devastator packs a nice and balanced challenge without much frustration. With unlimited continues and 1-ups easily found, most players will complete the seven-level campaign in a few sittings. For those having a hard time or want more of a challenge, there are Easy and Hard difficulties. The option to increase the amount of lives is also available. Having said that, Devastator‘s final stage is a shoot-em-up boss rush with no checkpoints between bosses. There is no save feature or password system, so players will have to set aside some time or reduce the difficulty if they struggle with it.

The stages in Devastator alternate between platformer and shoot-em-up gameplay. In the platforming stages the mecha has standard controls for walking, jumping, ducking, and sliding. The slide is especially useful as it knocks enemies back, damaging them. These platforming stages offer a good challenge without being outright difficult. The difficulty in the shoot-em-up levels is less than most other shoot-em-ups. Even though the mecha’s sprite is fairly larger, the hitbox is rather small. In addition to the standard shoot-em-up controls, the jump button turns your mecha so you can attack enemies behind you.

As with many side-scrollers, the highlight of Devastator is its boss battles. Most of the game’s bosses have multiple forms and will change attack patterns mid-fight. For both the platforming and shmup stages, the bosses have unique and powerful attacks. Whether the bosses are using options to fire lasers or creating mines out of sand, the player will have to stay on their toes and time their attacks in order to succeed. Though even with their powerful attacks, none of the bosses feel cheap or unfair. 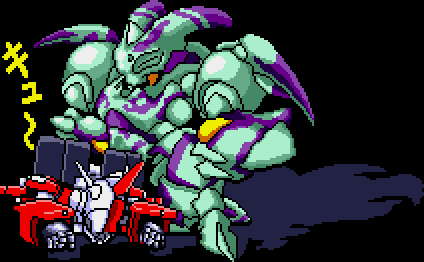 This Wolf Team game isn’t as technically impressive as other Mega CD games, but it does have some nice transparencies and scaling effects. Making up for its lack of technical prowess is some detailed artwork. Due to the dry source material, the art is mostly influenced by other anime and manga, with Masamune Shirow being the most obvious. Devastator‘s seven levels take place over a diverse variety of locales such as castles, sandstorms and caverns, keeping things visually interesting. Admittedly, the first stage has a horrible colour scheme, but move beyond this and the rest of the game looks great. Like Wolf Team’s other Mega CD games, the video clips are well compressed and have high visual clarity.

Devastator‘s soundtrack is exclusive to the game as no songs from the anime are played. Composed by Motoi Sakuraba, Ryota Furuya, and Shinji Tamura, it covers a wide array of musical styles, ranging from jazz-fusion and synthesizer music, to harmonic singing for the boss battles. 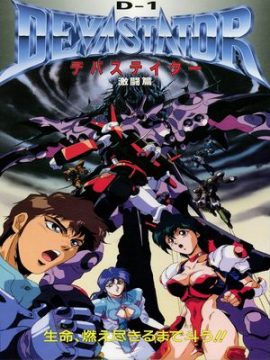 D-1 Devastator, the anime, is rather hard to find, as it was a Japanese only VHS/Laser Disc release. With no English DVD release or fansubbed torrents, only the most hardcore of otaku will be able to find and appreciate it. There are currently no compilations or download services to offer Devastator. Considering how obscure its license is, there likely won’t be one in the near future.