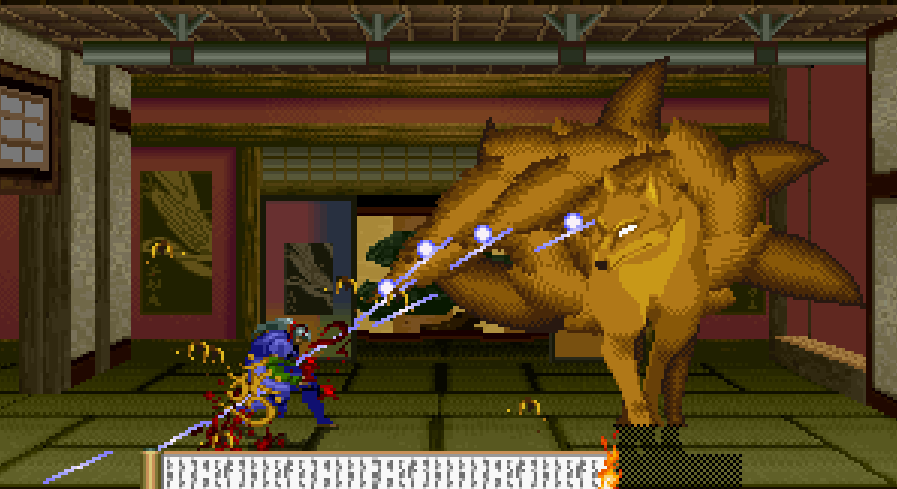 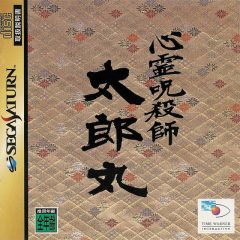 Shinrei Jusatsushi Taroumaru, also translated as “Psychic Killer Taromaru” or “Spiritual Assassin Taromaru”, or any combination of those words, has a reputation for being one of the rarest and most sought after titles on the Saturn. It was developed by Time Warner’s Interactive, formerly known as Tengen, the Japanese branch of Atari, which closed right after it was published. It’s rumored that there are only about 7,500 copies on the market. This rarity, combined with the fact that it’s kind of a good game, results in after market prices that run anywhere from $600 and higher, making it even more infamous than Radiant Silvergun or Panzer Dragoon Saga. However, while Radiant Silvergun may be ludicrously expensive, most shooter fans can at least agree that it’s an outstanding game. On the other hand, Shinrei Jusatsushi Taroumaru sits next to other expensive rarities like Kaze Kiri and Ginga Fukei Densetsu Sapphire for the PC Engine – both decent enough titles, but burdened with excessive expectations due its absurdly high price tag. 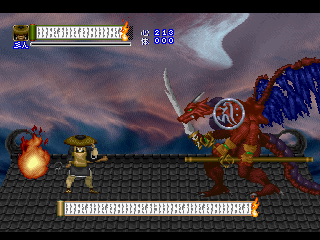 Shinrei Jusatsushi Taroumaru is a sidescrolling 2.5D action game featuring sprites for the main characters and polygons for the backgrounds, similar to Klonoa. You can play as one of two characters – the ninja Taroumaru and his buddy Enkai, who wears a huge straw hat and looks very similar to Sokazku Mochizuki from Fatal Fury. Other than some minor discrepancies with attack ranges, they’re mostly identical. The setting is vaguely similar to Sega’s old Mystic Defender / Kujaku Ou series, in that you’re fighting mythical bad guys in a medieval Japanese setting. It also tends to draw comparisons to classic Konami and Treasure games, mostly due to its level structure, featuring tightly designed set pieces and a ton of amazing boss encounters. The only real relation to Treasure is that one of the graphical designers was Hiroshi Iuchi, who worked on visuals in earlier titles like Gunstar Heroes, then later returned to Treasure to direct Radiant Silvergun and Ikaruga. 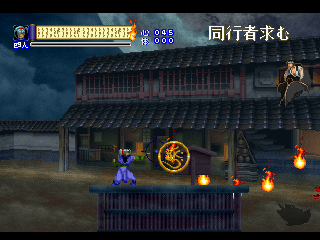 Shinrei Jusatsushi Taroumaru uses an atypical combat system, similar to Game Arts’ Alisia Dragoon. As the title implies, both attack enemies with their psychic powers. Floating in front of them is a targeting cursor, which will automatically lock onto the closest enemy, so all you need to do is jam the fire button to attack them with streams of energy. This is somewhat handy, because it allows you to attack enemies above or below you without having to jump to their level. On the other hand, the targeting cursor is extremely finicky. It has limited range, and it’s not always entirely clear when something is too far away to attack. Additionally, you don’t have any real control over which enemy is targeted. Most of the time, the screen is cluttered with bad guys, and since you can only attack a single enemy at a time, it makes certain areas feel pretty overwhelming. Many bosses also have multiple body parts that can be targeted, requiring that you cycle through them with the shoulder buttons. Only one of them is actually a weak point, so some of these can also be needlessly frustrating.

On anything but the lowest difficulty setting, even the simplest enemies take tons of hits to kill, with bosses having absolutely huge life meters. You also can’t move when you’re firing, turning you into a sitting duck whenever you attack. You can technically power up your psychic bursts to damage multiple enemies, but you lose your charge when you get hit, making it difficult to pull off in the situations where you need it most. This is a game where you desperately need a rapid fire controller, or else you’ll quickly wear yourself out pounding on the fire button.

In addition to your main attack, you can also hypnotize certain enemies to fight along side you, similar to the later Darius games. This is an awesome idea in theory, but in practice, it’s a bit underwhelming. Only a handful of different enemy types can be recruited – generally just flying priests and a few different variations of ninjas. You can only have one ally at a time, and they generally aren’t very aggressive. They mostly just stand around and occasionally attack until their life meter runs out. You can also cause them to explore and damage everything on the screen, which is really the only useful aspect of this system. Other than the primary attack and hypnotize moves, you also have a quick defensive maneuver which will momentarily knock away enemies and absorb most projectiles. 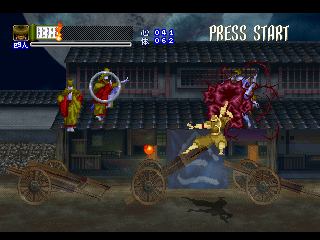 Since Shinrei Jusatsushi Taroumaru feels like it was designed to be an arcade game (though despite many rumors, it doesn’t actually appear to have had an arcade release), you can forget about being properly balanced, because enemies attack in huge numbers and the bosses litter the screen with tiny projectiles. Despite this, your life meter is pretty generous, and you resurrect immediately where you left off when you die or continue. Although you have a limited number of credits, Shinrei Jusatsushi Taroumaru isn’t particularly long, and can generally be beaten without much trouble within roughly half an hour. Although the game is technically divided into chapters, each stage segues into each other beautifully, without any break for loading time.

Since it was designed for the Saturn hardware, it’s not quite as graphically impressive as any similar games on the PlayStation, as the textures are pretty blotchy. Similarly, some of the main sprites look a bit pixelated, like they were designed for a lower resolution. Still, there are some pretty amazing effects – the multi-segmented bosses may not be as huge as in Castlevania: Symphony of the Night (which came out a few months after Shinrei Jusatsushi Taroumaru) but they’re just as well animated. The Saturn could also pull off some pretty amazing water effects (see also: Radiant Silvergun), and Shinrei Jusatsushi Taroumaru has the most gorgeous “burning town” level since Dracula X on the SNES. Most of the music consists of Japanese style instrumentations with some synth. It’s not bad, but it rarely sticks out. 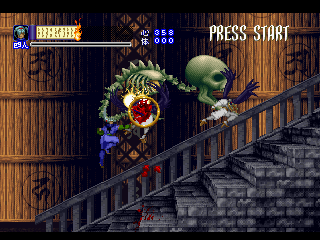 Even though the targeting system could’ve used some polishing, when Shinrei Jusatsushi Taroumaru is separated from its elite reputation, it’s an excellent ode to 16-bit side scrollers, and a great portal into an alternate future where gaming didn’t completely sell out to 3D. 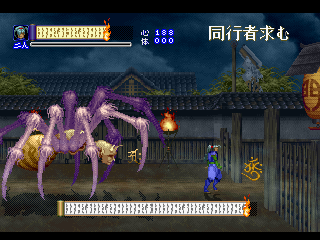 The first boss is a huge spider. Its beautiful animation almost makes you forget how hideous it looks.

So, there’s this dude on a boat, and you just start hacking off his limbs. Once you knock off both of his arms, he gets a little pissed and turns into this thing. 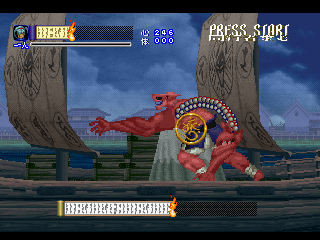 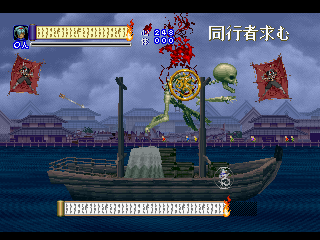 Once you take the boat guy down, a giant skeleton pops up in the background and starts wreaking havoc on the town, Godzilla style.

Yet another awesome boss introduction, there’s this woman and her child sitting out in the middle of this forest. Then the woman chops her son’s head off, while the body turns into a gigantic worm that she rides around the screen. 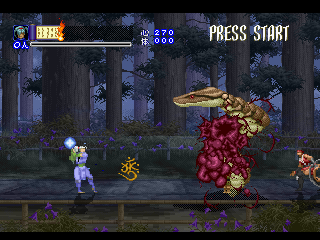 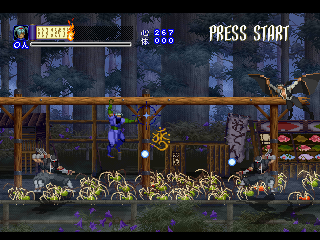 This isn’t a boss, but in this segment, you dangle over a parade of creepy crawly little spiders.

Boss fights like this are why the Saturn is a gorgeous machine. You’re fighting on a log that’s zipping downstream while being attacked by a gigantic frog. The awesome scaling in this part would make the SNES jealous with fits of murderous rage. 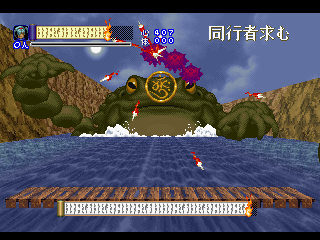 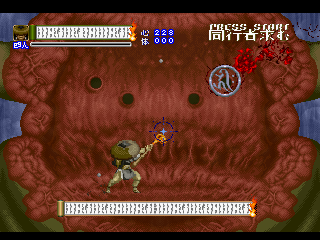 Even when you successfully kill it, you get stuck in the frog’s stomach anyway, and need to kill its rather violent ulcers.

Here’s another fight with Mode 7 gone wild. Those spiked walls will zoom in from the background, while the room spins when you run left or right. Just make sure to dodge them and you’ll be okay. 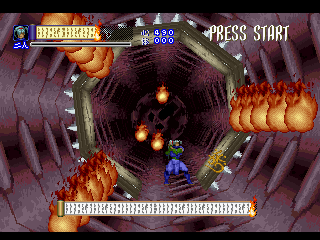 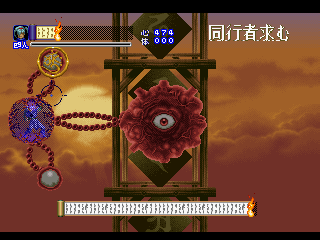 In this battle, you’re trapped in this barrier, and can cause the monster’s arm to extend and retract by hitting those orbs. Naturally, the weak point is the center. You play the entire next segment still in the round barrier, rolling down hills and fighting enemies simultaneously.

The designers definitely had a soft spot for spiders, as this mechanical, multi-legged machination seems to indicate. 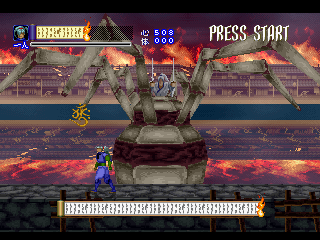 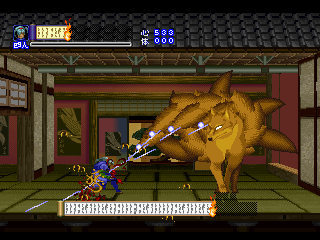 A young kimono clad girl changes into this devilish fox, which attacks with its huge cluster of tails. What’s particular awesome is that you decapitate it and rides it severed head to the final boss battles.

This spider is pretty much the same as the first one you fought, but with the torso of a Japanese general. 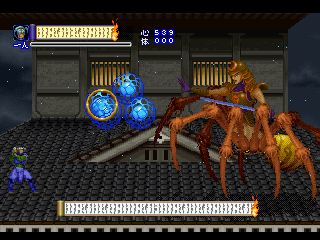 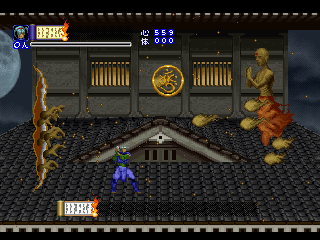 This praying guy e creates a portal of grabbing hands and calls fierce wings you suck you into them.

This demon fetus is similar to end of Blazing Star, which also had you fighting some kind of monstrosity while it was still in the womb. 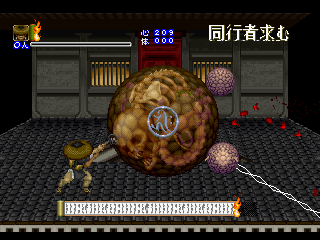 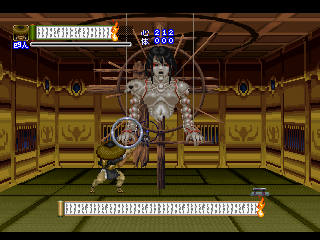 The next to lass boss is this creepy marionette thing.

Finally, the final final boss fight. The top half flies around and bashes you with its sword, while the deformed head at the waist shoots out energy beams. Freaky. 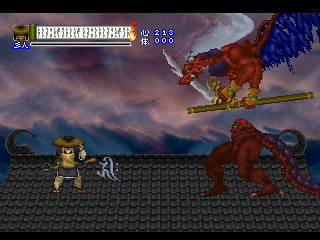