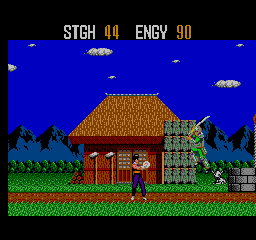 Though SpellCaster is one of the better-remembered Master System games, few knew at the time of its release that the original Japanese version was a licensed title based on Kujaku Ou, a popular action / horror manga about a Buddhist exorcist (see part one of this series for more details). As the manga wasn’t published in the West, all references to it were removed outside of Japan. The hero, Kujaku (or Peacock), was renamed Kane, and his monk’s robes became a sleeveless suit fit for a martial artist. His master, Jikuu, became Daikak, his friend / rival Onimaru became Jukak, and his childhood friend Asura was renamed Regina, and their appearance was also modified. Their roles within the Japanese game, however, already differed to a greater degree from the source material; in comparison, the localization changes are mostly superficial. 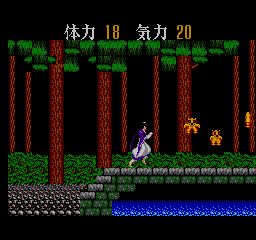 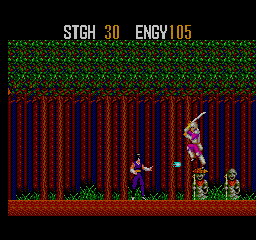 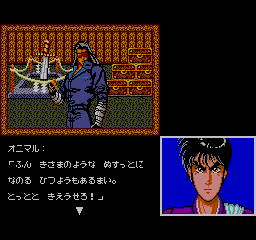 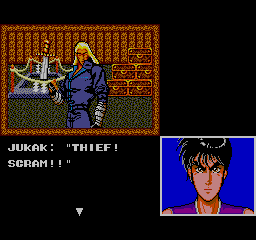 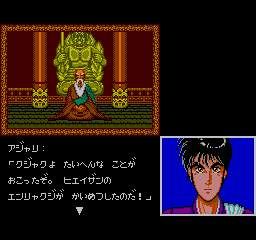 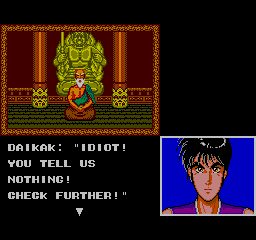 The story of SpellCaster‘s licensed origins has since spread, but it still isn’t widely known that it shares much of its content with a Famicom game also titled Kujaku Ou, released just two days earlier. Though the two were developed and published by different companies – Graphic Research / Pony Canyon and Sega, respectively – both were clearly based in part on the same script or blueprint. Roughly half of SpellCaster consists of graphic adventure sequences, in which you move a cursor to examine things, speak to NPCs and solve simple puzzles; these sequences are actually an abridged version of the Famicom game. The late game is significantly different, and the mostly extraneous first chapter, in which Kujaku investigates a series of mysterious deaths in a fishing village, has been eliminated, but the story (and puzzles) are otherwise the same. 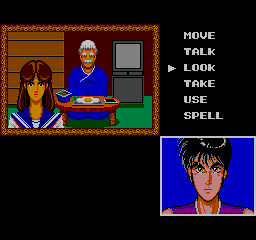 Following a series of attacks against local temples, the wise Daikak sends Kane, his pupil, to investigate. Kane quickly discovers the involvement of the Iwato clan, which seeks to revive its Serpent God to settle an ancient score. But could there be something more behind it? The answer, of course, is “of course”. All in all, it’s a relatively intriguing tale with a few interesting twists, though there is one part of it later on that is either poorly-explained or poorly-translated and ends up being confusing as a result. Other than that, the translation isn’t bad by the standards of the time, but typos are still all too common.

While the two games feature the same characters and locations, they look completely different. The Famicom game clearly takes place in modern Japan, with skyscrapers and convenience stores, the Master System game is all rural villages and Eastern temples; if it weren’t for small details like a TV in the background of a fisherman’s cabin, you might think it took place in some medieval fantasy land. In fact, the Western release’s manual plays it off that way. Likewise, the Iwato appear to be wearing crude brown masks and armored skirts on the Famicom, and elaborate, colorful suits of armor on the Master System. 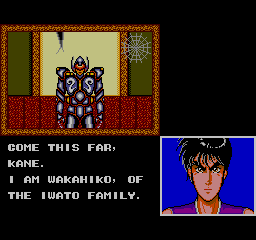 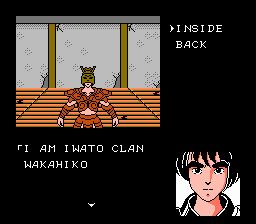 In general, Sega’s version looks great, with more detailed illustrations, more colors and cooler character designs. Some of the art is reminiscent of Phantasy Star, and in fact, two of the artists had worked on it a year before: Rieko Kodama, who’d go on to direct and produce some of Sega’s best-remembered games, and Naoto Ohshima, who, among other things, designed the character of Sonic the Hedgehog. 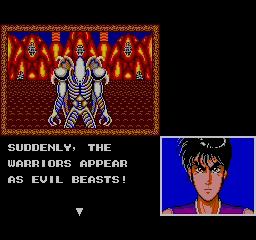 This H.R. Giger-style monster kind of looks like Dark Force… 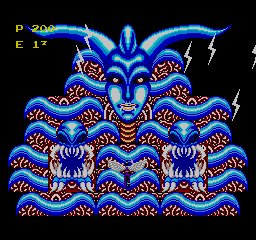 The other half of SpellCaster is the side-scrolling levels. While Kane is a bit slow, he generally handles well, with none of the slippery controls found in many Master System platformers, though you do have to get used to aiming for the middle of platforms, as some jumps that seem like they should land will not. To suit the adventure framework, dying only sends you back to Daikak’s Summit Temple, where you can choose to restart the level or take a break and resume your adventure later through a tedious password system. Fighting is done through projectiles only; you can fire balls of spiritual energy or charge them up for a stronger attack, though the latter is rarely useful. There are several weapon and armor upgrades, though they don’t change the way the game plays, apart from one thing; with a stronger weapon, a single shot can actually go through a weak enemy and kill a second, which is a nice touch. You can’t walk and attack at the same time, and most enemy types tend to lunge at you, so that the fighting feels more defensive than offensive and depends heavily on proper timing. Bosses often move faster than you, which makes some of those battles messier than they should be. 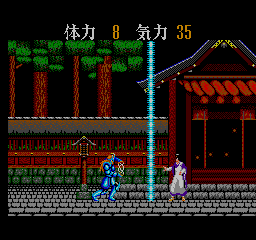 What separates the gameplay in these sections from other side-scrollers are the spells at your disposal. There are 8 of those, all available from the beginning; 5 attack spells, each with their own pattern and power level, a healing spell, a shield spell, and coolest of all, a spell that lets you fly for a time (or until you take a hit). Contrary to most games that feature magic, you don’t have an MP meter that can be restored all at once. Instead, every tenth enemy killed will drop either a blue ball, which restores health, or an orange one, which gives you 10 magic points; it’s technically possible to stack up to 999 of those right from the beginning. As magic is costly, you have to be extra careful how you use it, and you might even need to grind a bit so you don’t run out at the hardest point in the game, a level where you must fly over a sea of lava for an extended period of time while avoiding flying enemies trying to knock you down.

Using it is a bit awkward, however. To equip a spell, you must first press Pause and equip it from a menu – if you’re playing on an actual Master System, that means pressing a button unhelpfully located on the console itself. Then, once equipped with it, you hold the attack button, then press down. This makes it easy to accidentally waste a lot of magic points, so it’s better not to have a spell equipped when you don’t need one. It also means that there are no crouching attacks. 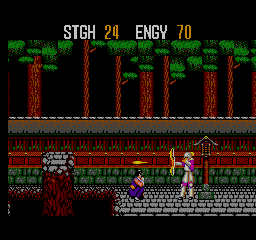 You can duck, but you’ll have to get up to fight back.

For the first half of the game or so, things move at a breezy pace. The levels are short, fun and well-designed, while the adventure segments are straightforward (it helps to read the manual and familiarize yourself with what spells do, as they are also used for some puzzles) and mostly serve to advance the story. Things change drastically when you make it to the pyramid, a huge, confusing maze full of doors to dead-ends and stairs to nowhere that’s as long to solve as everything that came before it. There are little markers of progress, like a handful of midbosses and enemies appearing in different patterns, but such a hardcore maze will likely appeal more to fans of old-school dungeon-crawlers than side-scroller players. The final set of adventure segments that follows is undeniably aggravating, requiring entirely too much back-and-forth through a level filled with annoying enemies as you talk to different NPCs and try every command at random in hopes of making things happen. There is even a boss that must be defeated quickly lest it runs away and never comes back, forcing you to start again from your last password. 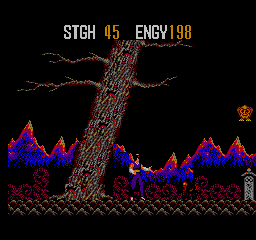 The underworld area has to be traversed both ways multiple times.

The final series of battle is pretty cool, though, as the game switches to a simple vertical shooter for a few minutes, an idea Sega would reprise in a different form for Michael Jackson’s Moonwalker a year later. 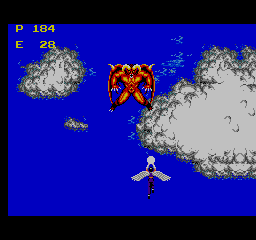 As with many Master System games, there are essentially two different soundtracks. There existed an accessory for the Mark III allowing the use of FM sound, which was integrated into later versions of the console in Japan but never made its way overseas. If you play SpellCaster on a standard Master System, you will get the basic PSG version of the tracks, while playing it on a modded system or through emulation lets you access the FM versions. In general the melodies are pretty good in either, but the steady percussion and additional sound channels of the FM soundtrack gives it more impact. 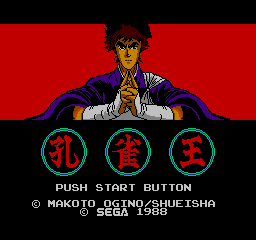 The Japanese title screen is also much cooler.

SpellCaster was also of a handful of Master System titles ported to the Mega-Tech system later on, a modified Mega Drive designed to run a selection of home titles in the arcades. The game itself is the same, except you need to spend quarters to buy a few minutes of play.

Despite the frustrating endgame, SpellCaster is still a highlight of the Master System library, and one of the few games, if not the only one, to mix those particular genres in that way. Though the Master System remained active for a while in America, and considerably longer in Europe and Brazil, it was one of the last big titles released for the console in Japan, towards the end of 1988; by 1989, Sega re-directed all its efforts towards the Mega Drive and its arcade titles, cancelling a slew of local Master System releases in the process. One of their early Mega Drive title would be another Kujaku Ou game, known in the West as Mystic Defender.

SEGARETRO – Has scans of the manual and a Japanese TV commercial for the game.